If you are looking for trees with names that start with “N”, you have found the right article! We have listed all of them here, along with a short description. Read further to learn more!

Juglans microcarpa, also known as Namboca, or little black walnut is a small tree that grows wild across ravines in Texas, Oklahoma, and Kansas. Two varieties exist: the microcarpa and stewartii. The name came from the Latin word juglans and microcarpa which means walnut that bears small fruit. Although literally a small fruit, they are edible.

Nogal may refer to any deciduous species of genus juglans in the family Juglandaceae. The edible walnuts are consumed widely, with China being the world’s biggest producer, responsible for half of the world’s total. The two most common and important species are J. regia used for its timber and nuts, and J. nigra for timber.

These deciduous trees native to North America are described as moderately long-lived hardwood. Although its time is not often used in furniture and construction because it is weak and decays easily, occasionally, it is still used in the production of cheap furniture and making fences. Natives of Omaha eat the fruits raw, while in Dakota, it is used as meat flavoring.

Northern White Pine is a large pine tree native to eastern North America. Mature trees are often 250 years old and some can live over 400 years. The trees have soft texture lumber used to be quite important in ship and wagon building in the 19th century.

Also known by its scientific name Carissa macrocarpa, this shrub native to Africa often grows well in coastal areas. They have glossy green leaves and white flowers that produce scent at night time. The only edible part of this small tree is its fruits, other parts may be toxic. The fruits can be directly eaten, or they may also be cooked as pies, muffins, or preserved as jams.

Nutmeg is a tropical evergreen tree in the family Myristicaceae. It is native to Moluccas or Spice Islands in Indonesia where it is mainly cultivated. The tree can reach up to 20 meters in height and typically bears fruits 8 years after planting. The fruit looks exactly like that of the apricots. The tree is important as it is the main source of nutmeg spices.

This deciduous tree is believed to have originated from Northwest China, where it was first domesticated and cultivated. It bears edible fruits referred to as peach or nectarines. Nectarines and peaches are the same species although treated as different fruits in the market.

Niaouli is a small to medium-sized tree in the myrtle family, Myrtaceae, which grows up to 20 meters in height, with white, beige, and grey papery and thick bark. The tree is multipurpose, widely used as traditional medicine by brewing the young leaves, typically as a remedy for headaches, colds, and other ailments. The tree is often planted as a street tree, typically found in parks and gardens. 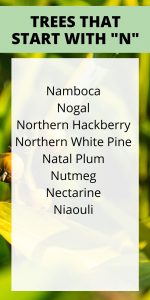