If you are here to look for trees with names that start with “B”, then you have found the right article. They are all on this list, along with a brief description. Read further to learn more.

Birch is a hardwood tree belonging to the family Betulaceae, joining other trees like hazel, alder, and hornbeam. It has thin-alternate leaves, with a bark that may vary in color, depending on the species. Its flexible hardwood lends itself easily to the production of doors, cabinets, and beds, making it popular in the furniture industry.

This deciduous tree in the Fagaceae family has about 10 to 13 species native to different parts of Europe, North America, and Asia. The most commonly cultivated species is the European beech, which is widely used in furniture, engineering, wood decorations, and construction. The dried woods can also be used as fuel. In fact, the logs are burned to dry the malt used in smoked beverages, sausages, ham, and cheese.

This small flowering tree in the family Rosaceae is believed to have originated from parts of Europe and Asia. In modern times in Europe, the bird cherry fruit is rarely eaten but is believed to have been a staple food in earlier periods. In Siberia, the fruit still has culinary uses. It serves as the main ingredient in making a bird-cherry cake after being finely ground.

Despite being widely considered a tree, bamboo is in fact botanically a grass. In Asia, it plays an important role both economically and culturally. Bamboo shoots are consumed as food. Bamboo is also used as a building material. Bamboos are believed to be one of the fastest-growing plants worldwide, as certain species can grow 2.54 cm every 40 minutes.

Box or Buxus is a genus in the family Buxaceae with around 70 estimated species, originally from western and southern Europe, Asia, Africa, and Madagascar.  This small, slow-growing, evergreen tree can reach up to 15 meters in height. Because of its fine grain wood, it is used extensively in the wood-carving industry, although limited due to its small size. Boxwood is commonly used in making chess pieces, storage boxes, wooden combs, and wooden utensils.

Banyan is a ficus that starts as an epiphyte, which is defined as a plant that grows on another plant. Considered the national tree in India where it is a native of, it is considered holy, hence temples are typically built around it. Its large size makes it a popular shade tree. 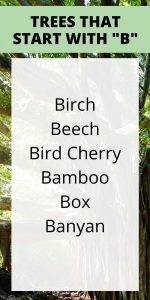