Are you looking for trees that start with “M”? You have found the right article. You will find all of them listed here, along with a short description. Read further to learn more.

Macadamia refers to four different species that belong to the family Proteaceae native to Australia. With its arranged leaves and flowers that range from white, pink, and purple in color, it is often grown as an ornamental tree. It bears woody globe-shaped nuts. Out of the four species, only three are in fact edible, as the fourth one contains harmful toxins.

This small tree native to Southern Africa, where grows well in coastal areas and commonly found in Eastern Cape and Natal. It has green leaves and white flowers that exude a highly distinct smell, especially at night. The round crimson fruit can be eaten or cooked into pies, jams, jellies, and sauces. Aside from the fruit, other parts of the tree are considered poisonous.

This flowering plant, named after Pierre Magnol, a botanist from France, has 210 species. Most species of this evergreen shrub with large bowl-like flowers are considered edible, with the petals pickled and used as a condiment. Other parts like buds, flower buds, young leaves, and leaves are also edible and can be cook in many ways. A certain species can grow up to a large size and harvest as timber.

Swietenia mahagoni or mahogany is native to the Americas and part of the family Meliaceae. Its reddish-brown timber is considered very important in the manufacture of furniture and in construction. Generally, there are three species that are considered “genuine mahogany”, while other species of Meliaceae with timber uses are classified as “true mahogany.”

This flowering plant scientifically called Mangifera indica and belonging to the sumac and poison ivy family, Anacardiaceae, is believed to have originated from the Indian subcontinent. This large tree is considered valuable because of its fruit rather than its wood, although upon reaching a certain age, it may also be cut into timber which is used in construction and instrument-making.

Mangrove is a small tree that grows in coastal areas where saline or brackish water reach. Unlike other trees, they are highly resistant to waves and tides and are salt-tolerant. They act as a protector against water pollution by cleaning, maintaining and providing shelter for most aquatic lives.

This flowering plant in the myrtle family Myrtaceae. It is an evergreen, densely-branched tree with small leaves and white flowers. The wood is hard and durable and is usually made into tool handles, while its sawdust is as fuel to smoked meat and fish.

Maple is a genus of trees in the family Sapindaceae, with 128 species. Maples usually have palmate leaves and are closely related to horse chestnuts. Their sap is made into maple syrup. Some maple species are planted mainly for ornamental purposes, as a bonsai plant, while some are valued commercially for their woods and timber.

Corymbia calophylla or most commonly known as marri, is a large common tree in Australia. The tree can reach up to 40-60 meters in height and with a trunk that measures 2 meters wide. They respond to insect damage by producing a bloodlike sap called kino, which is also used as an antiseptic. Marri wood and timber are commonly used in furniture-making.

This small tree is commonly known as tea tree belonging to the family Myrtaceae. It has a bushy crown and white bark. The tree is used as alternative medicine in Australia where the crushed leaves are used as remedy for cold and coughs. The tea tree oil contains antiseptic agents that are used as a treatment for acne and fungal infections like Athlete’s foot. 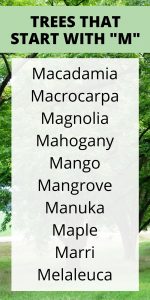