Are you looking for tree names that end in “A”? You have come to the right article. We have listed them all down here and briefly describe each. Read further to learn more!

Acacia is a genus of trees belonging to the subfamily Mimosoideae in the family Fabaceae. Its pod fruits are used in pharmaceuticals and as preservatives due to their tannin content.  In addition, the seeds are used as food in some cultures. It is also grown for ornamental reasons, while its timber is used in construction and furniture. Alternatively, it is also called mimosa or wattle.

This genus has nine species of trees in the family Myrtaceae, native to certain parts of Australia. The leaves of the tree are oppositely arranged both in their juvenile and adult forms. It produces round petals and capsuled fruits.

Balsa, scientifically known as Ochroma pyramidale, is a genus of Ochroma, a fast-growing tree native to the Americas; in fact, “balsa” is Spanish for “raft”. This deciduous flowering plant can grow up to 30 meters high. It is commercially known to be the softest hardwood. The spongy textured, lightweight, tough wood makes it useful materials in constructing models of aircraft, bridges, and construction buildings.

This large evergreen cone-bearing tree is commonly found in Queensland Australia. It is known to be the last surviving pine species of the bunya section. It bears edible cone-shaped fruits that fall to the ground when ripe. Meanwhile, the bunya timber is valued for use in the manufacture of stringed musical instruments.

Corymbia torelliana, or cadaga, is a species of tree that is native to Queensland in Australia. The tree reaches up to 30 meters high and forms a swelling root base, with a smooth bark that varies from green to grey to white in color. Being a fast-growing tree, it is commonly used in street gardens, landscaping, and fence.

This evergreen tree is mostly cultivated in South and Southeast Asia. It has aromatic barks which are mainly used as a flavoring for desserts, pastries, meats, and other dishes. The cassia buds are also into a spice since it has a flavor mildly resembling that of cinnamon. It is often used in pickles, marinades, and teas.

This genus of evergreen trees consists of 117 species native to Australia, South and Southeast Asia, and Eastern Africa. The tree reaches 35 meters in height, with greyish green twigs, scale leaves, and catkin flowers. It bears a woody, oval, cone-like fruit. The dense wood is very tough and hard making it excellent in construction and furniture.

This small evergreen fruit tree is native to the Caribbean, Central America, and South America. It is mainly grown for its edible fruits which can be eaten raw or cooked and are also processed into animal food. Its wood is used as a fuel to smoke meat in Hawaii. In addition, being resistant to insect attacks, it is also used as a roof frame in Nigeria.

This subtropical tree is from South America but now popular in different parts of the world as an ornamental plant because of its beautiful long-lasting purple flowers. The tree can grow as tall as 20 meters, with smooth, greyish brown thin bark. The wood dries easily which is best used in woodturning and carving.

This genus of cycad, belonging to the family Zamiaceae traces its origin to Mexico, the West Indies, and Central and South America. The name is a derivative of azaniae, a Greek word that means pine cone. These deciduous shrubs look like the palm; having spiraled arranged leaves and oblong fleshy seeds that come in yellow-orange to white. 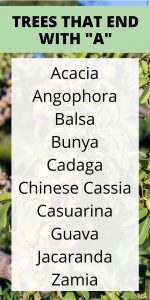