Are you looking for trees that start with the letter “F”? You have found the right article. We have listed all of them here, along with a brief description. Read further to learn more.

Scientifically known as Chamaecyparis, are medium to large evergreen trees with leaves that are needle-like when young, then turn scale-like when adult. Some species of this tree are considered to be of ornamental importance. Meanwhile, its wood is also considered very important and valuable in Japan, where it is scented and used in constructing temples.

Commonly called False Tamarind or Wild Tamarind due to its physical resemblance with the actual tamarind, Lysiloma latisiliquum is in fact a member of the pea family. Its wood is available in the market under the name, sabicu wood.

Fan palm is a generic term that is used to describe different palms with leaves that are palmately lobed. There are various generas that are called fan palms: European fan palm, real fan palm, Chinese fan palm, among others. Fan palms are grown usually as ornamental plants.

These flowering plants are native to the highlands of some countries in South America, such as Argentina, Brazil, Colombia, Paraguay, and Uruguay. It is grown for two primary uses: as an ornamental tree, and for its fruit. Its other common names include guavasteen and pineapple guava, although botanically, feijoas are not real guavas.

Fig tree, otherwise known as common fig, is a flowering plant that is native to western Asia and the Mediterranean region. Besides being an ornamental plant, it is also cultivated for its fruit, which can be eaten fresh or dried and used in the production of jam.

Finger cherry actually belongs to the family Myrtaceae, along with clove, guava, and feijoa. It is native to Australia and some pacific islands, where it is also called Cooktown loquat, finger cherry, or wannakai. The fruits are extremely poisonous and have been reported to have caused blindness in children.

Fir is the name of a genus that has about 48 to 56 species belonging to the family Pinaceae, all sharing the qualities of being evergreen and coniferous. These large trees can be between 10 to 80 meters in height, with trunks that measure somewhere between 0.5 to 4 meters in diameter. Because its wood is usually not suitable for timber, it is often extracted as pulp and manufactured into plywood.

Scientifically known as Barringtonia asiatica but commonly referred to as Fishpoison or Sea Poison Tree, this tree is native to mangrove habitats on some islands in the Indian and Pacific Oceans. The tree owes its name to all its parts being poisonous and often use suffocate fish while leaving its flesh unaffected.

This palm species native to Queensland, Australia, was only discovered in 1978 when it was brought by natives to the attention of botanists. It is described to be flowering, with greenish foliage, a trunk similar to that of the king palm, and fruits that can grow up to 2 inches in length. 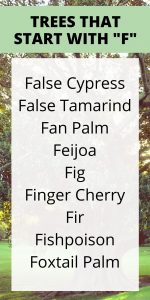