Are you looking for vegetables with names that end in the letter “Y”? Then this list is for you! We have come up with as many vegetables as we could find and listed them all here along with a brief description.

Also known as Spanish Salsify, this root vegetable is cultivated in the same way as purple salsify, both belonging to the sunflower family. The plant has yellow ray flowers, and the taproot can grow up to one meter in length and 2 centimeters in diameter. Its skin is black, hence the name, while its internal flesh is white.

Known in American English as Bok choy, this vegetable is also called pak choi, pok choi, or generally just chine cabbage. Although originating from and prominent in Chinese cuisine, Bok choy has become an internationally known vegetable because of its flexibility. It is a rich source of vitamins A, C, and K.

Celery is botanically a marshland plant but is cultivated as a vegetable. Besides its long fibrous stalk, its leaves, and hypocotyl are also eaten. Its leaves particularly have a sharp flavor, hence used sparingly in soups and stews.

Chicory belongs to the dandelion family. It is cultivated mainly for its leaves which are used in salads, although chicons may also be used, while the roots may be baked or ground for use as a coffee substitute or food additive.

Good King Henry is one of the many common names for the plant Blitum bonus-henricus, other names are poor man’s asparagus, English mercury, and perennial goosefoot. The plant grows in fertile, sunny locations. The shoots can be cooked in the same way as asparagus, while the leaves may be cooked like spinach.

Although native to the Mediterranean region, parsley is widely cultivated and consumed today. There are two main cultivars – leaf parsley and root parsley. The vegetable features prominently in Middle Eastern, Mediterranean, Brazilian, and American cuisines.

Otherwise known as Purple Salsify or Common Salsify, this vegetable is native to Southeast Europe and North Africa. As a vegetable, both roots and young shoots may be eaten once boiled. 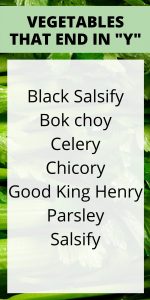