Are you here to look for vegetables with names that end in “N”? You’re in luck! We have listed them all here, along with a brief description. Read further to learn more!

Also called red mung bean, Azuki bean is the seed of a vine cultivated in almost all of East Asia. There are many varieties coming in various colors: red, white, gray and black. In East Asian cuisine, sugar is added before it is boiled and consumed. The bean paste is commonly used as toppings in dishes and desserts.

Cardoon, also called artichoke thistle, is a leafy flower-bearing herb plant that belongs to the sunflower family, originating from the western and central Mediterranean region. Cardoon is used as a vegetarian source of protein and is commonly made into cheese in Portugal and other countries in the region.

As an annual plant, common bean is cultivated for its seeds and unripe fruit, both edible. In some cases, the leaves are consumed as a vegetable too, whereas the dried stalks are also processed into animal food. Alternatively, it’s called french bean.

Unknown to many, corn actually belongs to the grass family (Poaceae). Although originally from South America, it has become one of the world’s most widely consumed staple foods, along with potatoes and rice. The most common variety is yellow and white; though there are also varieties which are pink, blue, black striped, and dotted colors.

Daikon, also known as white radish, is a root vegetable from South East or East Asia and is widely popular in Japanese and Chinese cuisines. The roots and leaves are both edible, usually raw in salads, or in pickles, and soups. The colors vary from light green to white, as do its size and taste, depending on the variety.

This species of beans are native to Africa and is cultivated for food. The short-lived vine has thick stems that can reach up to six meters in length. The leaves and flowers are edible in both their raw and cooked form; while the roots are boiled or baked. Meanwhile, the seeds are used to make tofu.

Green bean is the young and unripe fruit of common bean. It is mostly sold as fresh, frozen and canned. They can be served as boiled, baked, stir-fried, or just eaten raw. They are mostly cooked in dishes such as stews, casseroles, soups, pickles and etc.

Also known as butter bean in North and South Carolina, Lima bean has high amounts of dietary fiber and is an excellent source of fat-free protein. There is an appropriate process for cooking Lima beans as they can be dangerous when consumed without proper cooking/boiling.

This legume species is mainly cultivated in East, Southeast Asia, and the Indian subcontinent, where it is an important part of the diet. While it is often consumed as a dish or a soup, it also typically made into sweets. It is widely used across different cuisines in the region.

Onion is an annual plant that belongs to the same family as garlic, leeks, and chives. It comes in a variety of colors. Yellow and brown onions are usually preferred in European cooking because of their sweet taste, whereas red onions are typically popular in Asia. Meanwhile, white onions are preferred in Mexican cooking.

Pumpkin or squash originated from the southern parts of the US and the northern parts of Mexico. The yellow-orange pigment on its skin gets converted into Vitamin A when consumed. Most parts of the pumpkin are edible, including fruits, flowers, leaves, and seeds. It is often cooked into soups, sweets, and purees.

Soy beans are considered one of the most important beans in the world as it is a great source of non-meat protein and an important ingredient in the production of many chemical products. The most common products that are soy-based include tofu, vegan cheese, margarine, and meat substitutes. 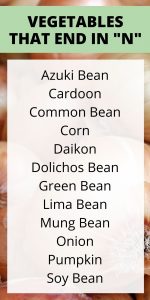