Are you looking for vegetables with names that end in “E”? You have come to the right article! We are listing all of them here along with a brief description. Read further to learn more!

Although not widely used in Western cuisine, Arame is quite popular in Japanese cuisine. This brown alga is also popular in other Asian cuisines, such as Korean. It is purchased dried but may be reconstituted pretty quickly.

Artichoke belongs to the thistle family, and also goes by the names French Artichoke and Green Artichoke. Right before the flowers bloom, the flower buds may be harvested and consumed as food, usually by boiling or steaming. It is also used and made into an herbal tea.

Cabbage is one of the most popular and widely consumed vegetables in the world. This leafy vegetable is usually green, but there are also red, purple, and white varieties. As of 2018, 48% of the world’s cabbage supply came from China, where the vegetable is featured prominently in different dishes.

Celtuce is, in fact, a cultivar of lettuce, which is why it is also known as Chinese lettuce, stem lettuce, asparagus lettuce, and celery lettuce. Both its leaves and thick stems are consumed especially in China and Taiwan, where it is usually stir-fried or eaten raw along with other vegetables in a salad.

Common Purslane is the name typically used to refer to the plant Portulaca oleracea. Other names include Pursley, little hogweed, and duckweed. It is usually eaten as a leaf vegetable and may be mixed in a salad. It is consumed in Europe, Asia, and Mexico.

Although also known as sea lettuce, Dulse is actually a red alga that grows mainly on the coasts of the Atlantic and Pacific oceans. Usually consumed as a snack food, Dulse is an excellent source of minerals and vitamins.

Endive is a term used to refer to a group of leaf vegetables that belong to the Cichorium genus, including endive, wild endive, and common chicory. It is rich in vitamins and minerals, such as folate, vitamins A and K, and fiber.

Kale, a salad staple, actually belongs to a cabbage cultivar. Besides being used in salads, it is also used as a potato substitute in snacks like “kale chips.” It is mostly grown in North America, China, and Mexico.

This annual plant is typically grown for its leaves which are used extensively in salads, but in some cases, its stems and seeds are used too. In some cuisines, lettuce may also be used in soups, sandwiches, and wraps. There are also recipes that require lettuce to be grilled. Most of the world’s lettuce is produced by China, followed by the US, India, Spain, and Italy.

Napa cabbage is a type of Chinese cabbage and is used heavily in many Asian cuisines. Other names include wombok which is preferred in Australia. In China, where the vegetable is a sign of prosperity, is fermented; while in Korea, it is the primary ingredient in making kimchi. In Western cooking, it is usually used in salads and soups.

Also known as rutabaga, neep, and turnip, Swede is actually a root vegetable, although its leaves are also eaten as a vegetable. Besides being a human food, both roots and tops are also used as livestock feed. 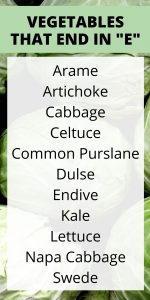