Are you here to look for vegetables with names that end in “sh”? Then look no further. We have come up with the complete list for you, along with a brief description. Read more to learn!

Also known as pepper squash or Des Moines squash, acorn squash is a type of winter squash that is characterized by its vertical ridges on its exterior. The flesh inside is sweet and yellow-orange in color. Generally considered a winter squash, acord squash botanically belongs to the same family as summer squashes like zucchini.

Banana squash is one of the cultivars of Cucurbita maxima, the scientific name of one of the four cultivated squashes for culinary purposes. It is named thus owing to its elongated shape. Its skin may be blue, orange, or pink, while its flesh is typically bright orange.

Black Radish, also known as Ertufer radish or Black Spanish Radish, is one variety of winter radish. As a root vegetable, its roots, which are edible, have a black skin, hence the name; while its flesh is white, like other radish varieties. It can be eaten raw as a salad, or it may be mixed with other ingredients into a soup or stew.

Along with banana squash, Buttercup Squash is one of the more popular cultivars of the Cucurbita maxima, the scientific name of one of the four species cultivated squashes. It has a turban shape with a top that is flattish, dark green skin, and a yellow-orange flesh.

Also called gramma or butternut pumpkin in Australia, Butternut Squash is actually a winter squash. Growing on a vine, it has a yellow skin while its pulp is orange. The taste is often described as nutty and sweet, similar to a pumpkin.

Also simply called chayote, chayote squash is actually a member of the gourd family, although it is often considered a summer squash. It may be consumed raw in a salad or in salsas. It may also be marinated with citrus like lime or lemon. If cooked, it usually goes through light cooking to retain its crispiness.

Daikon is a mild-flavored winter radish native to East Asia. It is often characterized by leaves that grow really fast, and roots that are long and turnip-shaped. Radish is very common in East Asian and South Asian dishes.

Horseradish belongs to the same family as wasabi, cabbage, and mustard. This root vegetable is often characterized by pungent taste and odor. It is cultivated and used in many cuisines in the world both as a condiment and as a spice.

Summer squash is actually a collective term that refers to a family of squashes that are harvested while they are still immature, while the rind is still soft and edible. They are called such because of their short storage life.

Winter squash is a generic umbrella term referring to a group of squashes that are harvested and consumed at their full maturity. Once these squashes are fully mature, with skins that have hardened, they can already be stored to be used during the winter, hence the name. 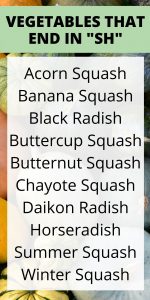