Are you looking for vegetables with names ending in “O”? Then this article is for you. We have done the research and compiled them all here along with a brief description. Read on.

Garbanzo is the alternative name of the legume we commonly know as Chickpea. Originating from the Middle East, Garbanzo is a rich source of protein. It is an important ingredient in hummus, chana masala, and falafel.

This root vegetable is one of the most popular and most consumed vegetables in the world. It is believed to have originated from South America, where it was domesticated in different locations. It is used today as a staple food in many cuisines in the world.

Radicchio is a leaf chicory that is very commonly used in Italian cuisine, hence its alternative name, Italian chicory. It is distinct because of its read leaves that form a head. The taste is described to be bitter and spicy but becomes less so when toasted or grilled.

This root vegetable is believed to have originated from the Americas. As a root vegetable, it is typically referred to as a yam in some South American countries, although it is botanically unrelated. The tuberous roots are starchy and sweet, hence the name.

This tropical plant is grown because of its many parts that are mostly edible. Its leaves, stalks, and roots are usually cooked and eaten in different countries where it is grown. Besides being cooked into a dish, it is also made into desserts in some cuisines.

Although the Spanish word tomatillo is widely used, this vegetable is also called Mexican husk tomato in English. It is an important vegetable in Mexican cuisine, where it is eaten raw, or cooked in different dishes. One such dish is salsa verde.

Ulluco or Ullucus is an important root crop in the Andean region of South America. Although the roots are the most important part, which is consumed like potatoes, the leaves are also edible and may be cooked like spinach. Its carbohydrate content is comparable to potatoes. 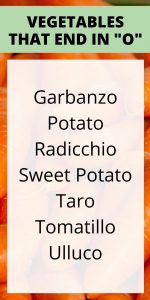