Are you looking for vegetables with names that end in “R”? You have come to the right article. We have listed all of them here, along with a  brief description. Read further to learn more!

Both edible plants belonging to the brassica oleracea species are referred to as broccoflower. The immature flower of these plants are edible and is consumed like broccoli. In fact, Broccoflower belongs to the same species as Broccoli and cauliflower. One type of broccoflower may have spiral clusters of of florets, while the second type pretty much looks like a regular cauliflower.

The caper plant can live as long as two years and is usually cultivated for its flower buds which are used as seasoning, and its fruit, which is typically pickled. In addition, its immature fruit is also marketed and prepared like berries. In the southern part of Italy, caper is used in cooking traditional dishes like salads, pasta sauces, chicken piccata, and spaghetti.

Native to the Americas, Japan, and Australia, Catsear is cultivated for its leaves and roots, although the entire plant is edible too. The leaves, though often described as flavorless, are usually eaten in salads, steamed, or stir-fried. The roots on the other hand may be used as a coffee substitute after going through roasting and grounding.

Unknown to many, cauliflower actually belongs to the mustard family. The only edible part of the cauliflower plant is its head, which is a typical vegetable used in many dishes across different cuisines. Most of the world’s supply of cauliflower is from China and India, followed by the US, Mexico, Spain, and Italy.

A flower-bearing plant, Ginger is usually just cultivated for its roots which are used as a spice, and in some cultures, as herbal medicine. Many cuisines, especially in Asia, feature ginger as a prominent spice. It can also be boiled into a tea, and in its powdered form, used as an ingredient in biscuits, bread, and muffins.

Also known as Japanese nori, Laver is a red alga that grows usually in high water in the Northern and Southern hemispheres. Once harvested, laver is typically dried for human consumption. It is one of the most important seaweeds in Japanese cuisine and features prominently in soups, as seasoning or flavoring, or as a sushi wrapper. 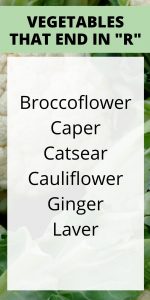