Are you looking for vegetables with names that end in “T”? Then you have come to the right article! We’re listing them all out here along with a brief description. Read on to learn more.

American Groundnut is one of the common names of the Apios americana, a perennial vine that is also called potato bean. This vegetable bears beans and large tubers, both edible. The tubers resemble potatoes and taste.

Bamboo shoots are what the name suggests, they are new bamboo culms coming out of the ground and harvested for culinary purposes, especially in many Asian countries, where a variety of dishes features it prominently. The shoots contain toxins that can only be destroyed by cooking the shoots thoroughly before consumption.

Beetroot refers to the taproot of the beet plant. In Canada and the US, it is known as beets, while the term beetroot is more commonly used in British English. In many cuisines, these deep purple roots are consumed boiled, raw, or roasted. It is also used along with other vegetables to make a salad.

Carrot is definitely one of the most popular root vegetables in the world. It is believed to have come from Persia originally, but it is cultivated today in many parts of the world, especially China, where 40% of the world’s carrots are from. Although commonly orange, there also exist white, purple, yellow, red, and black cultivars.

By botanical definition, eggplant is actually a berry, although it is used primarily in many cuisines as a vegetable. It is generally liked because of its spongy flesh, easily lending itself to various flavors. It is also known as aubergine, especially in British English.

Pignut, also known as hognut or Saint Anthony’s nut, is the common name for the small perrenial herb Conopodium majus. Its part that grows underground is sometimes likened to a chestnut. Readers of Shakespeare might recognize this vegetable as it was mentioned in his play, The Tempest.

Shallot belongs to the onion family, along with other vegetables such as the common shallot, chives, leeks, and garlic. Originating from Central and Southwest Asia, it is grown today in many parts of the world and is considered very important in many cuisines.

Scientifically known as Sium sisarum, is a root vegetable with white aromatic roots that measure around 15 to 20 centimeters. In terms of culinary use, this vegetable is prepared and consumed in the same way as parsnip and salsify.

Tigernut, also known as chufa, yellow nutsedge, and earth almond, is a plant originating from Southern Europe and Africa cultivated for its tubers which are edible. Besides being cooked as a vegetable, it is the primary ingredient of the drink horchata de chufa in Spain and is also used in oil production.

Water chestnut is a grass-like sedge that is grown in different parts of the world because of its corms which are edible. When eaten raw, they are crunchy with a slight sweetness. Whereas when cooked, it is firm, slightly crunchy, and nutty in flavor. 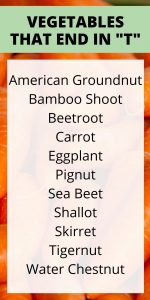