Have you ever wondered what fruits end in “A”? You have come to the right article. We have listed all of them here, along with a brief description. Read on!

Otherwise known as Jicama or singkamas (in the Philippines),  Ahipa is a root vegetable that grows on a vine that can grow up to 4 to five meters in height. The root’s peeling is papery and yellow, whereas looks like uncooked potato or pear. Starchy and sweet, it can be eaten raw or cooked into soups or stews.

This root crop is also sometimes called a white carrot, owing to its appearance which resembles a carrot and celery. The starchy root is often boiled and has a taste often compared to that of a chestnut, cabbage, and celery. This Andean region native is often made into flour, biscuits, and chips.

Arugula, or garden rocket, is an annual plant belonging to the family Brassicaceae. The plant is cultivated mostly for its leaves which are described to have a fresh, tart, and pepper-like taste. When fresh, steamed, or boiled quickly it provides 20% or more of vitamin K and folate, and a good source of Vitamins A and C.

This legume which is also called garbanzos beans has many varieties. The most commonly consumed variety is round-shaped and light brown in color. A typical ingredient in dips and sauces, it is also processed into flour and made into soups, salads, curry, and strews.

This woody small tree originated from South America. Grown principally for its starchy roots, this crop is a rich source of carbohydrates. It is typically served boiled or fried, although an ample amount of its root is used to extract starch “tapioca.” It is also used in some countries in flour production.

Chaya or tree spinach is the common name for the plant Cnidoscolus aconitifolius, a huge leafy shrub that is grown in Mexico. It can grow up to 6 in height with succulent stems. It is consumed in Mexico as a leaf vegetable, similar to spinach, but should be consumed only cooked.

Grown commercially mostly in Japan and Taiwan, this vegetable is also commonly known as Japanese mustard spinach. The leaves are usually used in soups, as they stay firm even after cooking, although they may also be eaten fresh, boiled, or stir-fried.

Melokhia refers to the leaves of the plant typically called Jew’s Mallow. Well-known in East and North Africa, the Middle East, and the Philippines (where it is called “saluyot“), these leaf vegetables are typically boiled mostly in soups and stews, giving the broth a thick slime similar to okra. It is rich iron, calcium, vitamin C, folate, beta-carotene.

Also known in English as “lady finger”, is a fruit vegetable that is known for the slime it produces when cooked. It can be boiled, roasted, or fried. Okra provides 20% or more of the daily requirement of vitamin C, vitamin K, dietary fiber, and a moderate amount of magnesium, thiamine, and folate.

Pea is the small seeds or the seed pod of the fruit Pisum sativum. Although botanically considered fruits, peas are usually consumed as vegetables. In today’s usage culinary usage, peas are usually boiled or steamed, the process giving it a sweet, agreeable taste.

Like other peas, snap pea pods may only be consumed while young. Oftentimes, they are consumed whole, boiled, or mixed in a salad. They may also be steamed or stir-fried. Once mature, the peas themselves can only be eaten if removed from the pods. 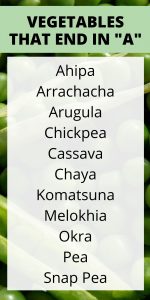