Are you looking for bushes that start with “A”? Look no further. We have listed all of them here, along with a brief description. Read on to learn more.

Abutilon is a large genus of flowering plants consisting of about 200 species found throughout America, Africa, Asia, and Australia. The genus includes trees, shrubs, and herbs. The height ranges from 0.5 to 3 meters. It bears solitary flowers that are yellow, orange, pink, or red. It produces round-shaped fruits containing seeds inside.

Acer or is a genus of trees and shrubs with about 132 species commonly known as maples. Acer is easy to recognize through its palmate leaves and its winged fruit. Most species are cultivated as an ornamental plant for gardens and yards in addition to its sap collected which is made into syrup.

It is a genus of 40 to 60 woody plants native to China, Taiwan, Japan, and Korea. The shrub’s size varies depending on its species. Mostly they grow up to 6 meters tall, while vines species may reach up to 30 meters in height. Most Actinidia species produce edible large fruits containing several seeds.

The genus Akebia consists of five species of flowering plants. The sweet edible fruits produced by two of these species have white gelatin-like pulp, although some describe them to have a somewhat banana taste. In addition to the fruit being consumed, the hard outside peel is also used as vegetables and the leaves as tea.

More commonly known as shadbush, this genus of small trees is composed of 20 species native to temperate regions of the Northern Hemisphere. Most species are popular as garden ornament due to their flowers, barks, and color. In addition, several species are also cultivated for their edible fruits and seed production.

Peppervine, as it is commonly called, is a genus of climbing shrubs in the family Vitaceae. This genus has about 15 species that can be found in mountain regions of temperate zones. Some species are popular as ornamental plants in gardens and yards, while others are consumed as food plants by some insects.

Arbutus is a genus in the family Ericaceae with 12 species known scientifically. They are native to the Mediterranean, Western Europe, and North America. This genus is known for its edible red fruit and for being an attractive garden plant. The genus cultivation is hard, due to the roots’ low resistance to disturbances.

Azalea is a genus of Rhododendron a part of the family Ericaceae. These flowering shrubs best grow in a shaded part near or under trees. Aside from its beauty making it a popular garden plant, it’s also known for its high toxic contents including the leaves and nectar.

Also known as spotted laurel, this shrub native to China, Korea, and Japan can grow from 1 meter to 5 meters in height, with purple-brown small flowers. It is often cultivated as an indoor garden plant, green house plant, and as a typical ornamental shrub. 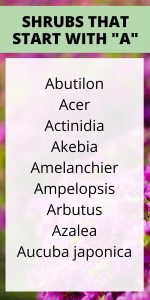