Are you looking for bushes with names that start with “B”? Well, you have found the right article. We have listed all of them here, along with a brief description. Read further to learn more!

This genus of flowering plants in the family Iridaceae consists of about 80 known species. The greater numbers of the species are solely native to the Cape Provinces of South Africa. The genus name is derived from the Dutch word baviaan for baboons that consume the bush’s edible tuber.

Baccharis is a genus of perennials and shrubs belonging to the family Asteraceae, commonly known as Baccharis but are also referred to as brooms because of their thin leaves. It is a large genus with over 500 species found throughout America. It is used in traditional medicine and the flowers are a source of nectar for honey production, although some species are reported to be toxic to animals.

It is a genus of flowering plants in the family Myrtaceae which is composed of 13 species native to Australia. This genus can grow into aromatic shrubs, although some species are trees. The overall size ranges from 5 to 25 meters tall with long, wide leaves arranged.

Bacopa monnieri or more commonly known as water hyssop is a climbing perennial herb belonging to the family Plantaginaceae. They are native to the wetlands in many regions of the world. They are non-aromatic herbs with thick oblong leaves and small white flowers. The plant is used in Ayurveda traditional medicine, although there is no proof that it can cure diseases.

Betula is a genus of several species more commonly called birch. It is a deciduous small to medium-sized shrubs or trees, belonging to the family Betulaceae. The genus has simple leaves with barks characterized by horizontal lines which are gray, white, or yellow in color depending on its species. They are commonly cultivated for ornamental purposes, while some species are used in traditional medicine and in constructing furniture.

Bidens is a genus of flowering plants in the family Asteraceae. The genus’s name is derived from the Latin word for “two teeth” which refers to its fruit’s shape. Most species are native to the Americas, Africa, Europe, and Asia. The majority of species of Bidens are used as food plants by larvae of Lepidoptera.

These flowering plants in the family Rutaceae have about 160 species, mostly endemic to Australia, although some are native to New Caledonia. This genus is mostly shrubs while a few species are herbs or small trees with simple leaves arranged in opposite pairs and flowers arranged in clusters. They are commonly grown as a garden plant although difficult to cultivate. Meanwhile, some species are known for their flowers’ distinctive fragrance.

This is a small genus with only 3 species of woody evergreen shrubs which are widely separated geographically: the Canary Islands, Cyprus and the western Himalayas. The species range from medium to tall shrubs with many stems similar to cane. They have small and simple leaves and bear tiny green-white flowers. The plant produces berry-like fruits which are used as food plants and traditional medicine.

This genus of perennial and annual plants in the grass family Poaceae is native to Eurasia, North Africa, and some Atlantic islands. They are referred to as quaking grasses because of their flowers and stalks that shake with the slightest wind. Briza species are used as food plants by the larvae of some insects, while some species are grown as ornamental plants.

Buxus, commonly known as boxwood, is a genus of about 70 species in the family Buxaceae. The larger number of species are tropical and sub-tropical, while some European and Asian species can tolerate cold temperatures. These evergreen shrubs and small trees are slow-growing. They rarely reach 15 meters tall. They are often cultivated for use in carving and turning. 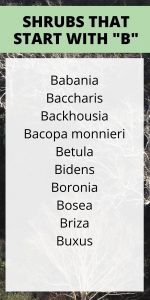