In this article, we're explaining what fried eggplant is like. We'll cover taste, texture and cooking tips to prevent sogginess. Then we'll share some of the vegan recipes of your dreams. 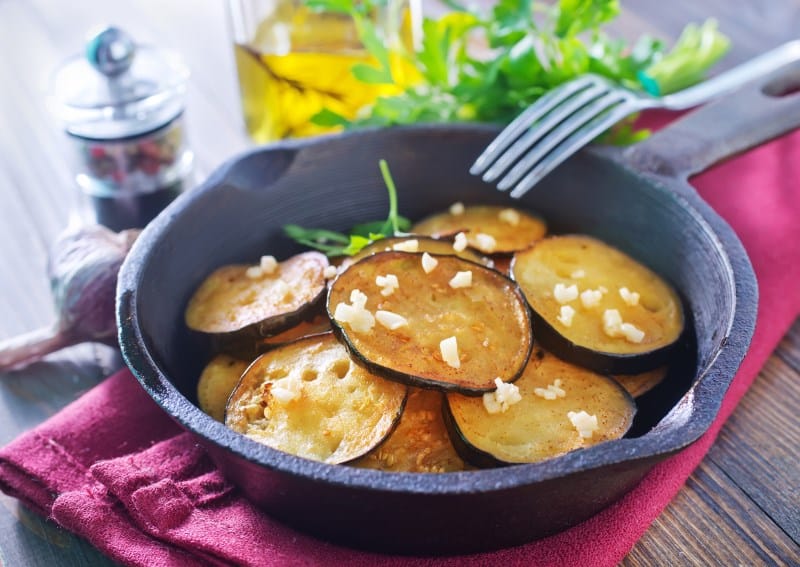 Fried eggplant is delicious. Not everyone enjoys the earthy flavor of eggplant, but frying it makes it taste sweeter, almost like roasted eggplant.

The ingredients of the breading or batter will have an effect on the flavor. A vegan beer batter will make it maltier while an Italian breadcrumb coating might include seasonings like garlic, oregano and basil.

Fried eggplant has a dual texture from the cooked eggplant inside and the crisp outer coating. The eggplant itself will be very moist and exceptionally tender.

A breaded coating will add a crunch that pairs well with the creamy eggplant. Vegan battered and fried eggplant is more crisp than crunchy, which also nicely offsets the eggplant's softness.

Do You Have to Peel Eggplant Before Frying?

There's no need to peel the eggplant before you fry it. The skin may feel pretty firm when it's raw, but it will be just as soft as the flesh of the vegetable after it's fried.

That doesn't mean you shouldn't take the skin off first if that's your preference. Sometimes you'll come across a particularly mature eggplant whose skin feels extra tough, in which case you may decide to peel it.

How Do You Keep Fried Eggplant from Getting Soggy?

It's possible that fried eggplant will get soggy as it sits. If you want crisp leftovers, one way to avoid this is to limit the sauces you use. The drier they are, the firmer they'll be later on.

Too much frying oil can also make eggplant wilt. Go lightly with the oil in the pan (skip deep-frying for a healthier option) or oven-bake the eggplant instead.

Ready to get cooking? There's a whole world of vegan fried eggplant recipes out there. We've selected some short videos that will guide you through the steps of some that are destined to become repeat dinners.

This plant-based version of South American milanesa is like a cutlet you can do quite a bit with. Dress it with vegan gravy and serve with mashed potatoes and greens, or build a sandwich stacked with lettuce and juicy tomato and finished with vegan aioli.

Here's what you need for these cutlets:

We think you're going to want to try this vegan eggplant parm recipe with layers of creamy cashew white sauce.

Recommended Article: What Does French Press Coffee Taste Like?

Vegan fried eggplant is such a treat. It's soft yet crunchy, flavorful yet mild enough to match any sauce. You don't need to deep-fry—even oven baking will crisp it up perfectly. From vegan eggplant parm to faux fish and chips, you won't get bored with all the different menu ideas.