Coconut sugar has gained popularity as a cane sugar substitute in recent years. If you haven't had the chance to try it, we're going to give you all the details on taste, texture and how to use it, plus some yummy vegan recipes. 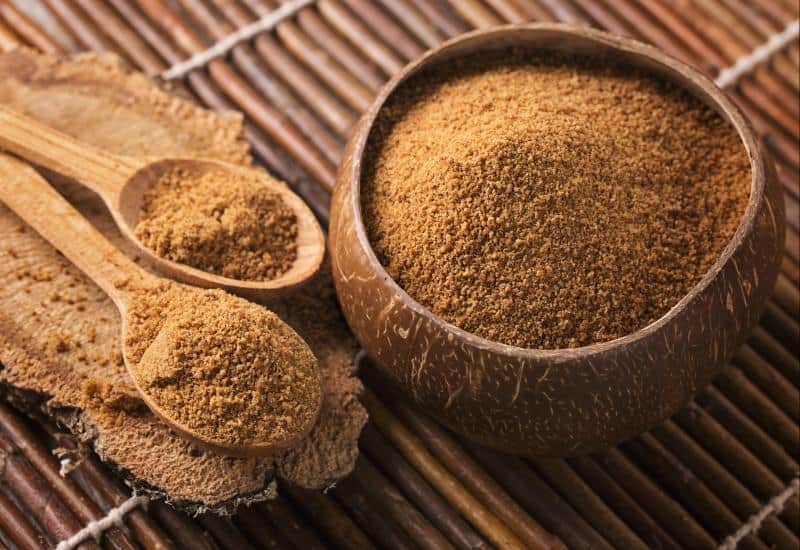 Coconut sugar is derived from the sap of the coconut palm tree. Knowing this, you can imagine that it's not really like cane sugar. There's also no coconut flavor in coconut sugar, which is something you might expect.

Rather, coconut sugar has a deep flavor that's close to brown sugar. It's sweet and has a caramel essence, though it's also slightly earthy, which you can taste in your coffee or tea.

Cane sugar generally has a shiny, crystalline form, but coconut sugar is more like tiny pebbles, similar to brown sugar but more sandy.

Coconut sugar is also light and a tad bit moist, but not as moist as brown sugar. It's like a hyrbid of white and brown sugars, silty with a little moisture, but not sticky.

Can You Substitute Coconut Sugar for White Sugar?

Substituting coconut sugar for white sugar is so common these days that you might even see coconut sugar at coffee shops' fixings stations. However, if you do swap sugars, there are some things you should know about flavor.

Coconut sugar is not quite as sweet as white sugar. This means that baked goods will need extra coconut sugar if you're striving for the level of sweetness you might be used to.

Additionally, because of the earthy flavor, coconut sugar may or may not be ideal in every recipe. Some people do love it in their coffee. Others, not so much.

Is Stevia Better Than Coconut Sugar?

Because coconut sugar is touted as a "healthy" sweetener, it's often compared to stevia, another natural sweetener considered "good for you." However, one is not necessarily better than the other. They're just so different from each other that there are many factors to consider.

We won't comment on any health claims, but we can tell you that the taste of stevia is nothing like the taste of coconut sugar. Some people are excited about coconut sugar because it's more similar to cane sugar without the back-of-the-palate sweetness of stevia.

Coconut sugar tends to be easy to bake with, too. Though you may need to fiddle with your recipes, the texture and taste of coconut sugar make it perfect for many cakes, cookies and muffins.

When all else fails, you can always have a vegan bake-off with stevia and coconut sugar (the judging is the fun part).

How Long Does Coconut Sugar Last?

You should always store coconut sugar in an airtight vessel somewhere away from light and humidity. If you do this, it can last for a good year or two.

If you leave coconut sugar out, you might notice it start to dry out the same way brown sugar does. It's different from going rotten, but it becomes difficult to work with.

You can certainly use coconut sugar as a straightforward sweetener, but we thought we'd show you how you can use it in vegan desserts. Chocolate bars and cinnamon donuts, anyone?

If you've ever been curious about what goes into vegan chocolate, you can at least see what a homemade version is like with this clever recipe. It uses finely ground coconut sugar, cacao butter, vanilla extract and cacao powder, and the end product is pretty decadent.

Would you be excited if we told you you could make gluten-free vegan cinnamon donuts with coconut sugar? This recipe calls for a product called Bee Free Honee, which is actually made from apples (not honey). If you can't get your hands on some, you can substitute any liquid sweetener in the kitchen.

You can replace your standard sugars with coconut sugar in your beverages, baking and cooking as the flavor and texture are so similar. Stir it into your coffee or tea or use it like white or brown sugar in pies, cookies, donuts and even homemade vegan chocolate bars.