If you haven't tried coconut, we're going to tell you everything you need to know about the taste and texture. You'll also discover some helpful hacks for getting the most out of both fresh and dried coconut. What about coconut water, you say? Yup, we'll tell you all about that, too. 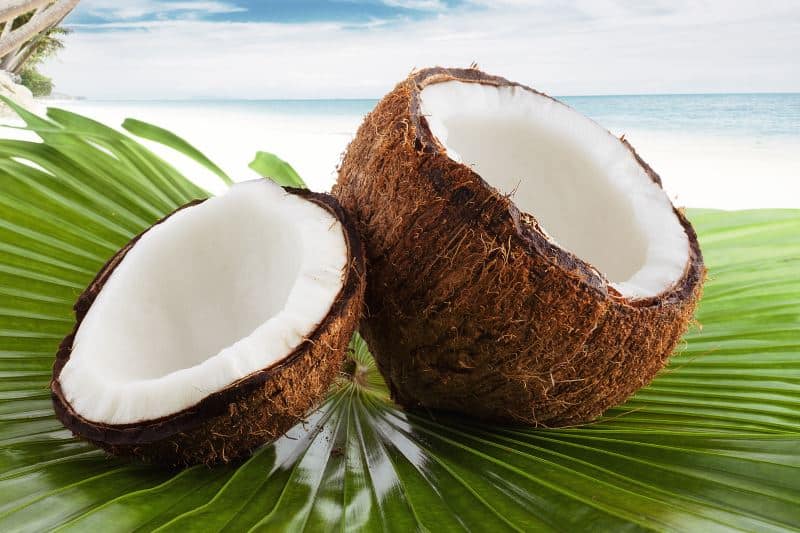 Navigate This Article Using The Links Below
What Does Coconut Taste Like?
Coconut Texture
What Does Real Coconut Water Taste Like?
Can You Eat Coconut Skin?
How Do You Know When a Coconut Goes Bad?
Coconut Hacks in the Kitchen
Wrap Up

Once you had it, coconut is one of those flavors you'll start to taste in other foods, too, like certain fruits and nuts. It's a robust flavor, particularly when it's dried.

The flavor of fresh coconut meat is tropical, a little nutty and slightly sweet. When coconut is toasted, it takes on a deeper flavor, more woody with a hint of vanilla.

While all coconut is creamy, the texture does vary. The meat of a mature brown coconut is thick, heavy and dense whereas the texture of a young Thai coconut, which conical on top, is gelatinous and easy to scoop.

Dried coconut (also called desiccated coconut) is crunchier, though still soft. In fact, its texture is somewhat similar to the meat of a mature coconut, just a lot drier and easier to eat as it's shredded.

The coconut water, or the liquid inside the coconut, is the sweetest part of the fresh coconut. It has the same flavors of the coconut meat, just much sweeter.

Coconut water straight from a young Thai coconut has the most sugary taste while the water from a mature brown coconut is more neutral but very refreshing.

Can You Eat Coconut Skin?

When you extract the coconut meat from the shell, you'll see a thin brown skin underneath the white part. If you like, you can eat it. Like almond skin, it has a parchment-like texture.

Coconut skin is full of fiber, so it's not a bad idea to eat it. It is a little dry on the tongue, so having it blended up with the meat, perhaps in a smoothie, is ideal.

How Do You Know When a Coconut Goes Bad?

A young Thai coconut at the end of its life cycle will have large purplish to dark brown patches on the bottom. A little color is fine, but a lot of color can mean a spoiled coconut.

The water of a young Thai coconut that's been around a little too long with also start taking on a brownish color (though pinkish water is fine).

Mature coconuts are bad if they have any mold on the outside. You'll also want to steer clear of cracked coconuts as the cracks let bacteria in.

Coconut Hacks in the Kitchen

Opening a coconut can be tricky. There is a safe an easy way of removing the top of a young Thai coconut as well as a hard, mature coconut, as you're about to see.

This video offers a demonstration of the simplest way of opening a young Thai coconut. You don't need a huge kitchen knife, but you will want a sturdy one.

You'll find a lot of tutorials on the internet for cracking open a tough brown coconut, but we think this approach is the most practical. You'll need a screwdriver, a hammer and a spoon.

Homemade coconut milk from fresh coconut is a treat, but if you don't have an actual coconut, you can use desiccated coconut. This little trick is time-saving and produces creamy, fresh-tasting coconut milk. If you have a blender and cheesecloth, you can make coconut milk this way.

Coconut is one of those flavors that's used to describe other flavors—that's how unique it is. It's nutty with hints of vanilla and woody flavors, and the creaminess is divine. Eat it fresh and savor the coconut water or blend it all up into coconut milk for adding to smoothies, curries, soups and sauces. There's no limit to what you can do with coconut in both savory and sweet dishes, so have fun with it.