In this article, we're discussing allspice. We're answering your questions about flavor, recipes, and substitutions so you'll never been stranded if you run out. 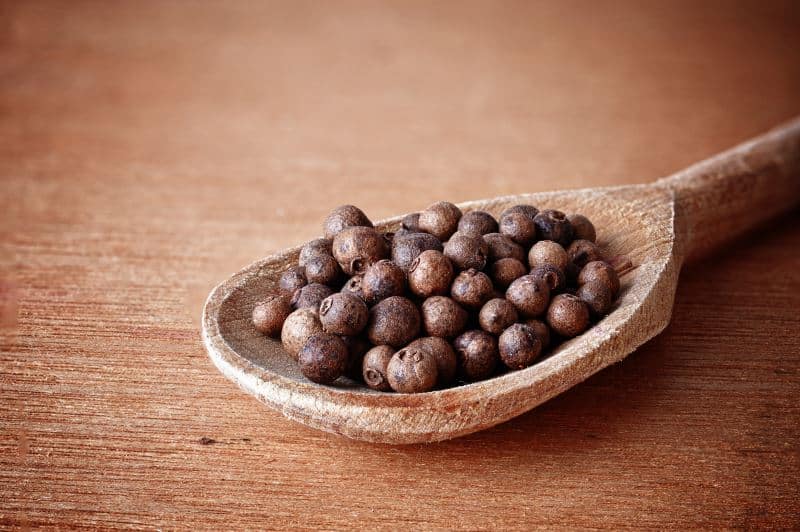 The name "allspice" may lead you to believe that it's a combination of spices. Really, it's the fruit of the Pimenta dioica, a tree native to Central America and Mexico.

It does taste like a combination of spices, though, including nutmeg, cloves and cinnamon. It's strong but pleasant and tastes like it's made for vegan pumpkin or apple pie.

Like cloves, allspice berries are hard and should either be ground first or simmered in a sauce and then scooped out before serving.

Ground allspice may be quicker to work with as it's fine usable in any recipe. However, as with other spices, the whole form will retain freshness for a longer period of time.

How Do You Grind Allspice?

You have a few options if you want to turn your whole allspice berries into powder. First, there's the traditional mortar and pestle.

You'll need to apply some pressure when crushing the spice in the bowl, but it shouldn't be too strenuous. The result might have a slightly pebbly texture, which is perfectly fine.

A spice grinder is another option, but an electric coffee grinder works, too. You'll probably want to wipe down the inside well before and after grinding (unless allspice-flavored coffee sounds yummy to you).

Can I Use Ground Allspice Instead of Allspice Berries?

There's no reason that you can't use pre-ground allspice rather than the berries in a recipe. Often, the powdered spice is what people have in their cabinets.

If you don't grind it fresh, the flavor might be milder, but you can always add a pinch more. Check online for proper measurements.

What Can Be Used Instead of Allspice?

It's possible that any single spice that tastes like allspice can be substituted (like cinnamon, nutmeg and clove), but the best replacement is a combination.

Use significantly more cinnamon than the other spices, which are more pungent and can easily be overpowering. You can even just do cinnamon plus one or the other without causing your recipe to suffer.

You'll probably notice that allspice is frequently blended with a number of other spices when cooked or baked with. It's a warm spice, and it undoubtedly adds something special.

These phenomenal Jamaican patties are like savory pies stuffed with potatoes, onions and cabbage and seasoned with allspice and Jamaican curry powder.

If you love all things apple, give this vegan apple bread a try.

Allspice is delicious. It tastes like cinnamon, nutmeg and cloves, and though it's usually associated with desserts, you can make savory foods with it, too. Snacks like vegan Jamaican patties with curried potato fillings are pretty stellar, as are spiced apple pies and vegan cakes. As you'll discover, there are lots of recipes to start adding allspice to. And no hot apple cider is complete without a sprinkle of allspice.