Wondering if gushers are vegan? You've come to the right place. 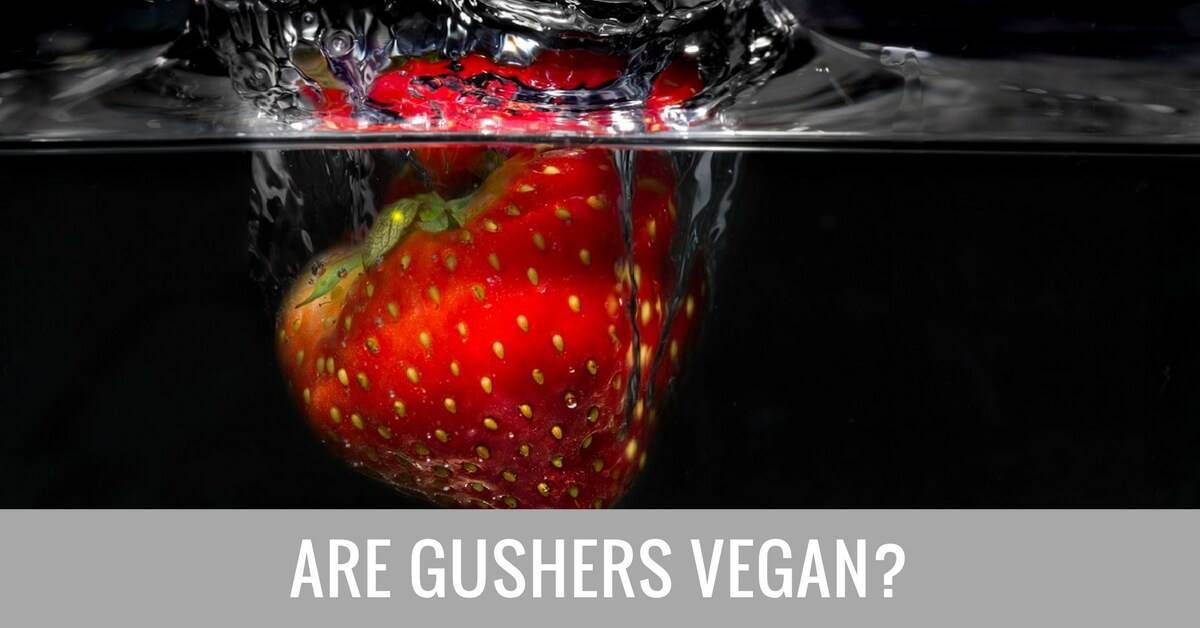 In this article, we'll explore the vegan status of gushers along with all the ingredients in these popular snacks.

Navigate This Article Using The Links Below
Are Gushers Vegan?
Do Gushers Have Gelatin?
Gushers Ingredient Breakdown
Conclusion on Gushers

Being that there are no blatantly labeled animal products in gushers we would consider them vegan.

Although Gushers certainly aren't a whole-foods healthy snack, they fit into the definition of veganism which seeks to exclude animal harm and exploitation as much is possible.

You'll also save time and money while learning new ways to live plant-based.

Do Gushers Have Gelatin?

According to the General Mill's website (company that owns gushers) there is no gelatin in Gushers.

Here are all of the ingredients in gushers with a bit more detail about the vegan status of each one. This is from the Strawberry Splash flavor of gushers taken directly from the General Mills website. Always check store ingredient lists as manufacturer websites can sometimes be out of date.

We've put an asterisks* next to the ingredients of particular importance.​ As you'll see below, the origins of some of these ingredients is quite dubious.

However, we take the position that unless an ingredient is a specific driver to the animal agriculture industry, you're better off not stressing too hard about it as it doesn't do any good for stopping animal suffering.

Corn syrup is a sweetener made by using enzymes to break down the starch of corn into sugar molecules. No animals involved.

Sugar can be a tricky ingredient because some sugar is filtered using bone char.

Many vegan organizations agree that sugar used in a food product shouldn't be fretted over. Avoiding these products would do little to nothing to prevent animal suffering and most likely the manufacturers don't even know the vegan status of the sugar they used.

Corn treated with certain enzymes for different functionalities mainly for the purpose of modifying the viscosity of the final product.

Sugar found in fruits. Not particularly great for you when its not part of the whole fruit, but vegan nonetheless.

Food additive used as a thickener derived from plant starches.

A controversial ingredient due to the nature of how it is harvested, many might consider it not to be vegan, but the subject is a bit nuanced and subjective.

If we didn't use so much land for animal agriculture, there would be a lot more room to produce these types of ingredients ethically rather than having to deal with shrinking land availability.

But it's up to you how far down the rabbit hole you want to go. Some people (including myself) try to avoid palm oil as much as possible.

Most glycerin is derived from plants although the potential exists for it to be animal derived. We go into greater detail about this in our article on vegan gum.

An oil extracted from the seeds of cotton plants.

This is basically grape fruit juice that has had most of its water removed making it a "concentrated" form.

A thickener derived from seaweed, no animals involved.

Naturally found in citrus, citric acid is used as a preservative and as a flavoring agent.

Used as an emulsifier, this is another one of those controversial ingredients where it becomes difficult to identify the origins. It could be animal or plant derived. Unfortunately, calling the company won't even be helpful most of the time as they are unlikely to know the origins.

Given that it is such a small ingredient that isn't a primary driver of animal agriculture, we recommend not to worry about it. PETA takes the same position. (1)

Can be made from citric acid and sodium bicarbonate - not animal derived.

Extracted from plants - nothing to worry about in regards to its vegan status.

This is just vitamin C.

A natural flavor can pretty much be anything (2) that's approved for use in food that's used as a flavoring agent. Often times knowing its true origins is going to be impossible, even if you call the company. Much like our position on monoglycerides, we suggest you don't sweat it. The less people purchase blatantly labeled animal products in the first place, the less likely it will be to have these dubious ingredients derived from animals in the first place.

Without getting too technical, its the potassium salt of citric acid. Don't worry about this one.

A gelatin alternative derived from algae. We love this ingredient and recommend it to make your own jello!

Commonly thought to be made from beetles, its actually made from coal. Wouldn't worry too much about this one. (3)

A thickener typically obtained by the fermentation of bacteria. Don't worry about its vegan status.

Although some of their ingredient status may be a bit dubious, we don't recommend you worry about it. Stick to removing all labeled animal products to your diet (meat, eggs, dairy, fish, gelatin, etc) as it is the most impactful thing you can do for the planet and the animals.

Do you have a craving for vegan sweets and snacks like gushers? Check out these related articles...