Is chewing gum vegan? Do vegan chewing gum brands exist? We’ll cover all that and more in this guide to vegan gum.

In this article, you’ll learn…

Most of the time, unless it contains gelatin, gum is vegan.

Some older gum labels have “milk derivatives” such as casein such as Trident White. (1)

However, it seems that such ingredients have recently been removed. (2)

Gum brands are seem to be changing their ingredients all the time so it’s always good to double check.

As with anything with sugars, flavors, and long ingredient lists, there runs the risk of animal products being somewhere in the supply chain, but that doesn’t mean that buying a pack of gum off the shelves (without gelatin) isn’t considered vegan.

In our opinion, every product that exists causes harm at some level.

The most important thing is to avoid all labeled animal products to have the biggest impact on animal welfare and the planet.

New to veganism? You’ll want to check out this shopping list of foods vegans can eat. 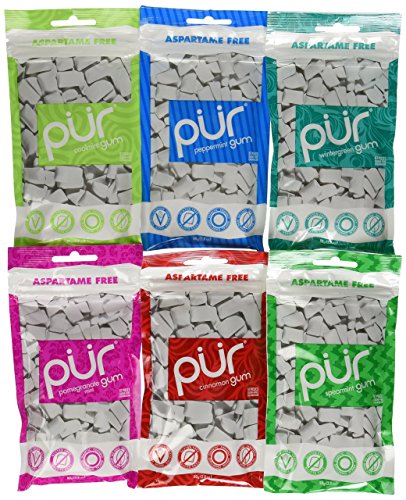 Advertised as being 100% vegan, PUR gum is an excellent option for the vegan who wants to avoid artificial sweeteners including Aspartame which is found in most of the big gums. It’s also free of many of the major allergens including: gluten, soy, nuts and peanuts.

PUR makes a wide range of flavors including:

Even though it doesn’t have an aspartame, that doesn’t mean that it is unsweetened gum (yes, such a thing exists).

Its sweetened with Xylitol which is a common ingredient in many dental health promoting gums. Xylitol is also diabetic friendly. 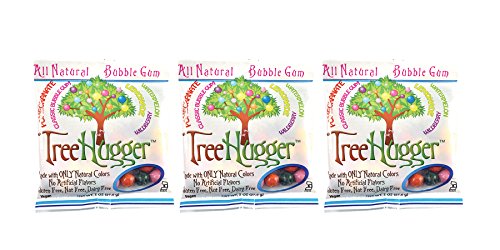 For vegans looking for a bubble gum fix, we’ve got you covered! Tree Hugger makes 100% vegan gum and has a lot of different flavors compared to the other gums that we’ve listed. The two flavors that we found that they manufacture are (3):

It is also important to note that they recently took beeswax out of their gum.

These gums don’t have any artificial colors or flavors, ​but this means that they contain real sugar in some form or fashion.

Probably not enough real sugar to warranty any health concerns for healthy individuals from a dietary perspective, but your dentist may not be too happy with you if you’re chewing it all the time! 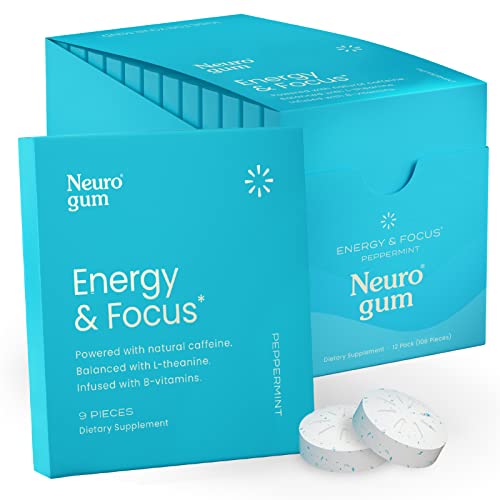 While we’re always skeptical about supplement claims (and you should be too), we figured it might be worth listing this gum just because it looked interesting and because it is 100% vegan.

If you’ve never heard of a Nootropic before, its the latest trend in the supplement world that’s designed to improve brain function.

As with all supplements of this nature that promise to improve performance, it’s always good to be skeptical.

However, this gum does have caffeine and many people can vouch for caffeine’s performance enhancing properties.

It’s also got L-Theanine which has been reported by many to have excellent synergistic effects when combined with caffeine.

Again, we’re not citing any studies on this one, so the jury is still out, but we thought it would be interesting to at least show people that this kind of gum exists. 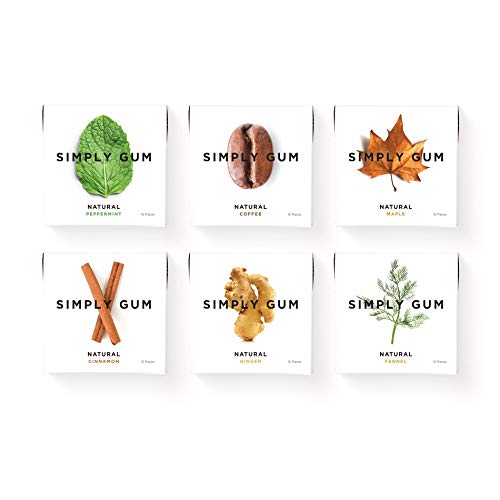 Known for their minimalist packaging you may have seen Simply Gum on the shelves at Whole Foods, Trader Joe’s, or even more traditional grocery stores. Being that they advertise as 100% vegan, you can rest assured that they go out of their way to source all plant derived ingredients, even if you’re not sure what all of them are!

The packaging is pretty unique as the gum doesn’t come individually wrapped, it’s all together inside the box. There is then a separate compartment for “post chew wraps” so that you can put your chewed gum in a wrapper rather than sticking it under the table (don’t do this)! The other thing that’s pretty cool about Simply Gum is that they have some pretty unique flavors such as:​ 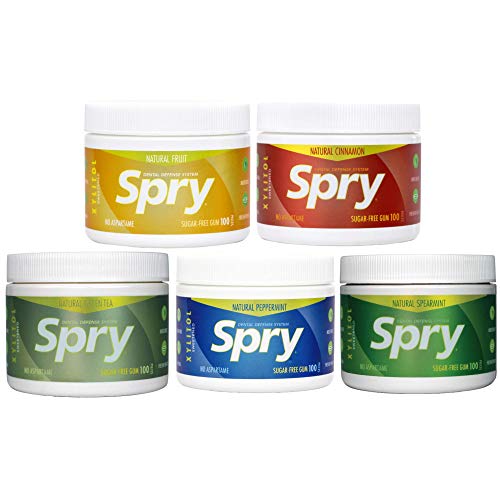 Although marketed as an oral health gum, Spry gum is also a great options for vegans who are looking for gum with a simple ingredient statement. The company specifically points out that their glycerin is plant based. It’s great that they do this because glycerin does have the potential to be animal derived (more on this in the “Potential Non-Vegan Ingredients” section). Spry gum is manufactured in a variety of different flavors including:

As an added bonus, Spry gum is formulated to help with dry mouth and bad breath.

Although we haven’t tested it for these specific purposes, we can say that the gum chews and tastes pretty good and is a great alternative to aspartame based gum.

What Types of Gums Should Vegans Be Especially Careful Of?

If there’s one type of gum that vegans should be especially careful of, it’s gums with flavor crystals.

We’ve found several instances of such gums containing gelatin so keep a careful eye out when you’re shopping.

For the big gum brands, we’re working with the information that’s currently available on their website. Many of the manufacturer’s state that this is subject to change and advise consumers to check current packaging or call for any updates.

Also, most of the big brands and flavors that you see on the shelves are owned by Wrigley’s. Wrigley’s owns gum brands such as:

All of the nutritional information that we’re analyzing below can be found on this page of their website. (4)

It is also important to note that Skittles​ which are also owned by Wrigley, used to contain gelatin. As recent as 2010, gelatin was removed from the formulation. One can assume that this decision by the company indicates that they are moving away from animal based products in their gum and candies as the demand for cruelty free products grows.

They haven’t done this for everything, though. All of the Altoid’s flavors we found still contained gelatin.

Based on the ingredient panels from their website (5) we found that Orbit Gum did not have any animal ingredients. All of their gums that we looked at contained glycerol which is the same thing is glycerin. From our research, glycerin used in food products is usually plant derived (see FAQ). That being said, we would added orbit gum to our accidentally vegan list.

Here’s what the ingredient statement looked like for their bubble gum:

Much like Orbit Gum, 5-Gum has a similar formulation. The only difference between the two is likely the branding, packaging, and presentation. Just like Orbit, glycerol is the only ingredient that would raise any red flags for us. The ingredient statement for their Ascent flavor is as follows:

Big Red actually contained some real sweeteners as well as some artificial ones. That means that it contains sugar, another “controversial” vegan ingredient that we advise not stressing too heavily over (see the linked article for more information). We didn’t see any gelatin in Big Red, so we’re also adding it to our accidentally vegan list. It had the following ingredient statement:

Just like Big Red, Doublemint isn’t a sugarless gum. It has a combination of sugar and artificial sweeteners, but again no gelatin.

We were excited to see that Juicy Fruit’s Sugar-Free Pellet Gum (ingredients below) didn’t contain any gelatin! This was great news because pellet gums do have a greater likelihood to have it. This indicated to us that there’s a chance gum companies are purposefully not including it in their products (or perhaps they’ve found a cheaper alternative).

To conclude our big gum brand analysis, we were hard-pressed to find any gums that had gelatin in them, so it seems like this is a dying practice. Mints and other confectioneries were another story so be sure to not assume that just because a brand makes gum without gelatin that their other products won’t contain it.

Which Potential Non-Vegan Ingredients Can Be in Gum?

As we state in much of our other content, we don’t recommend worrying about trace ingredients, especially as a new vegan or one that is trying to convince others to try out the lifestyle. Making veganism seem overly complicated or nuanced can give people more excuses to not give it a fair shot. However, it is important to be educated about the food supply, but please consider this when trying to introduce he lifestyle to new people or even if its becoming too complicated for yourself.

Eliminating all specifically labeled animal products is the number one goal.

Out of this entire list – gelatin is going to be the number one red flag ingredient. This is because unlike the others, gelatin is always going to be 100% animal derived. Other ingredients on this list can have multiple sources and much like sugar, it is likely that manufacturers source a combination of animal-derived and vegan-friendly product.

Thankfully, gelatin is mainly only found in pellet gum according to the

A common ingredient in chewing gums, glycerin has the potential to be animal derived. However, according to the Vegeterian Resource Group, most glycerin used in foods is plant derived. If the pack of gum you’re looking at doesn’t state that it has “plant derived glycerin”, contacting the company is the only way to know, but you may want to consider not making it complicated for yourself and not worry about the “potential” for animal ingredients. See our “Note and Disclaimer on Trace Ingredients” below. (7)

However, the goal of veganism doesn’t have to be complicated nor does it have to be based on health. Plenty of vegans still enjoy chocolate, Doritos, and even some types of Takis – although we recommend not to overdo it and to stick mostly to whole foods.