Trying to figure out the difference when comparing the Vitamix 750 vs 780 Professional? Also confused on which one to buy? You're in the right place! 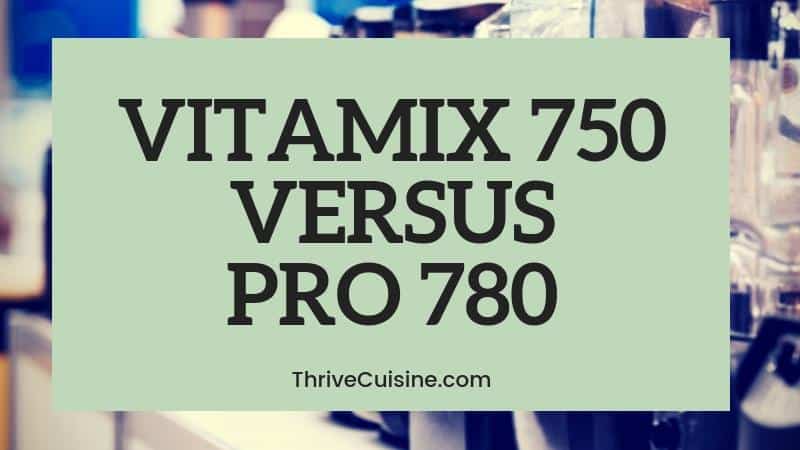 We've created this guide to make the decision easy. Keep reading to find...

Mobile users can scroll left to right on their screens.

This motor, complimented by the tamper and the way the blades and jar are designed, is more than powerful enough to meet all of your blending needs.

One of the major selling points of the Vitamix is that it has the capability to create so many things...

...And both motors are enough to do all that and much more.

Long story short, you don't have to worry about the motor in either of these blenders. They're both the same power and more than enough for anything you want to create.

Related Article: Can You Blend Apples With Skin?

The controls and interface are the biggest difference between these two blenders, so that's what we'll spend the most time on. 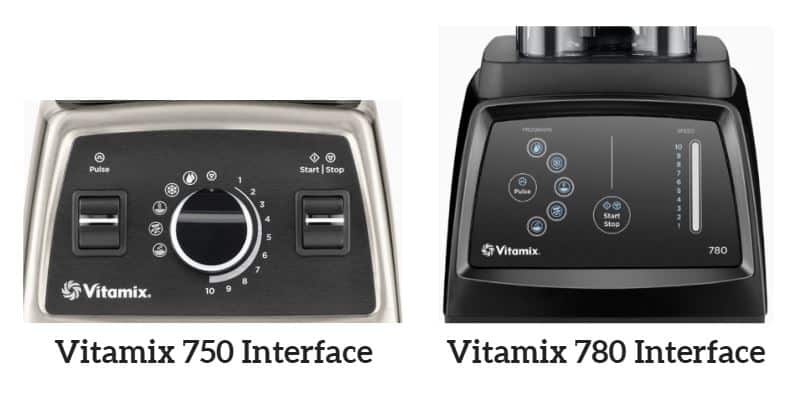 Both the 750 and 780 Professional come standard with a low-profile 64-ounce jar.

Vitamix has been making 64-ounce jars for some time now, but the low-profile design is a bit newer. They're around 3-inches shorter than the Classic Vitamix jar.

One obvious advantage to having the low profile jar is that it can fit easily under a low-hanging cabinet. This makes storage of the Vitamix much easier, especially if you've got a small place.

The other advantage is that the wide blades are great at creating a quick vortex, even when the jar is close to the mix fill line. It's GREAT for large batches.

The downside is that it requires a larger volume of ingredients and liquid to make small batches effectively. With the more narrow 64-ounce container, it doesn't take much to get the liquid passed the blades.

That said, you can always get a smaller container (from the link above to Vitamix Accessories) if you find yourself struggling with smaller batches.

Read Next: How Much Ice Do You Put in a Smoothie? (No More Than This)

The 750 has a neat array of different color options outside of the standard black and red. Not necessary unless you have a specific design aesthetic in mind for your kitchen, though.

These two blenders both come with the famous Vitamix 7-year warranty.

It really is as good as people say it is.

Vitamix is one of those rare companies that actually stands firmly by their products. I've only had positive issues dealing with their warranty support (and honestly some of the things they fixed for me were my fault - not to say they will always do that).

Both the 750 and 780 Professional come with the same low-profile tamper. And it's awesome that they do!

The tamper is arguably the best part of any Vitamix.

It allows you to push the ingredients into the blades during the blending cycle rather than having to stop and take the lid off.

It makes forming a vortex so easy and efficient.

Further Reading: Why Is My Smoothie Watery? (3 Simple Things You Need to Fix)

I've read several other blog posts that compared these two blenders and took measurements on which is louder.

However, I don't think that should be a major buying consideration for either the 750 or 780.

It's important to note that both of these blenders are going to be loud machines. They're blenders with powerful motors!

If noise is really your top concern, then consider going with a Vitamix Quiet One. Even though it's a commercial product, you can still use it on your home if noise is of paramount concern - although it wouldn't be my first pick because of the extra cost.

Again, the two MAJOR differences between the Vitamix 780 and 750 are the touchscreen display (780) and the different finishes that they come in.

The 750 is designed with a bit more aesthetic in mind with the copper metal and brushed stainless finishes while the 780 is only manufactured in black and red.

Other than that though, the blenders pretty much have the same functions.

They even have the exact same pre-programmed settings, it’s just that the 780 is activated by a touchscreen while the 750 requires turning a knob to get to them.

Honestly, I would take the 780 over the 750 simply because ease of cleaning the interface if I absolutely had to pick one of them.

The MSRPs on these units aren’t too far apart, so you’re unlikely to save a bunch by going with either one.

If you’re looking for something a little more manual, then I’d recommend checking out a refurbished 5200 or something from the [amazon fields=”B0758JHZM3″ value=”link” title=”Explorian series”] so you don’t have to pay for the extra programmed functions on the 750.

Read Our Big Guide: Different Types of Blenders to Buy