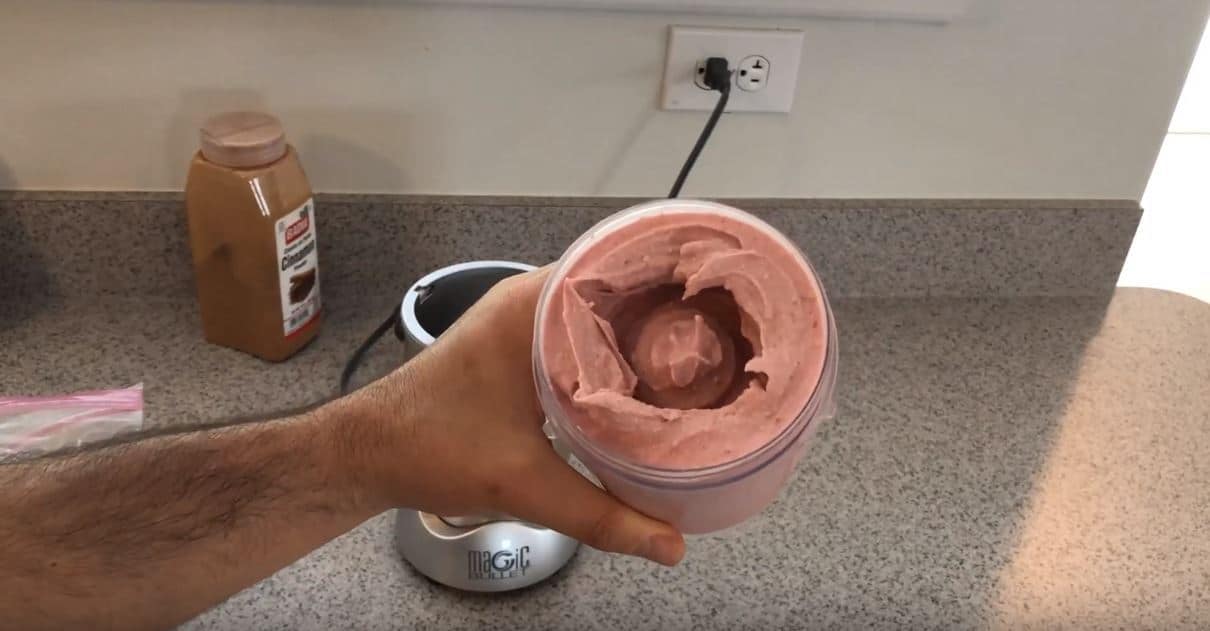 Quick Answer: I don't recommend putting more than 2-3 medium sized cubes of ice in a single-serve smoothie. Any more than that and the smoothie will become watered down and kind of like a slushy consistency rather than something smooth and creamy.

If you're trying to figure out how to make the perfect smoothie, then stick around.

I've got some tips that you're going to find useful...

Side Note: The photo above is from my favorite Nutribullet blender​​​​.

A few ice cubes will make smoothies thicker, but adding too many will make them thin quickly. Doesn't make sense? Let me explain...

Basically, when you add a small handful of ice cubes, all of the ingredients in your smoothie are pretty well homogenized. In other words, nothing separates out and every sip is pretty much the same.

Once you add too much ice, the ice will start to separate from the liquid and it will form a slush type consistency. What usually happens is that the ice starts to gather up at the bottom if you're drinking and you have to swish things around to get the liquid. Because after all, you can't really get ice through a straw.

So that said, add your ice sparingly. If you want to make a really thick smoothie, here's what you should do instead of adding ice....

How to Make Your Smoothie Thicker Without Ice

If you want to make your smoothies thicker without adding ice, I have two words for you: frozen fruit.

By throwing frozen fruit (bananas, strawberries, blueberries, etc) in a smoothie blender you'll end up with a milkshake like consistency that you can eat with a spoon.

It's my personal favorite way to thicken up a smoothie and probably the way that's most effective.

If you've ever used chia seeds, then you know that they are "hydrophilic" meaning that they soak up all of the liquid they're in and become like a gel. When you blend up chia seeds into a smoothie it thickens it like you wouldn't believe.

If you have some frozen fruit in there, you may have a hard time getting it through a normal sized straw. I recommend the thick stainless steel straws.

They aren't as effective as chia seeds, but they basically do the same thing. They're also a great way to get your omega-3s on a plant-based diet.

If you want to add some extra calories and thickness, simply add some raw oats to your smoothie. It adds a pleasant grit that makes it similar to eating an ice cream with toppings.

Don't knock it until you've tried it.

In the video below, you'll get a better idea of what I'm talking about. I'm creating one of my favorite recipes - an oatmeal strawberry banana smoothie. Watch how thick it comes out...