In this article, we're answering your biggest questions about sumac spice. You'll learn all about the taste, common uses, recipe substitutions and storage tips so you can wield this seasoning like a pro. 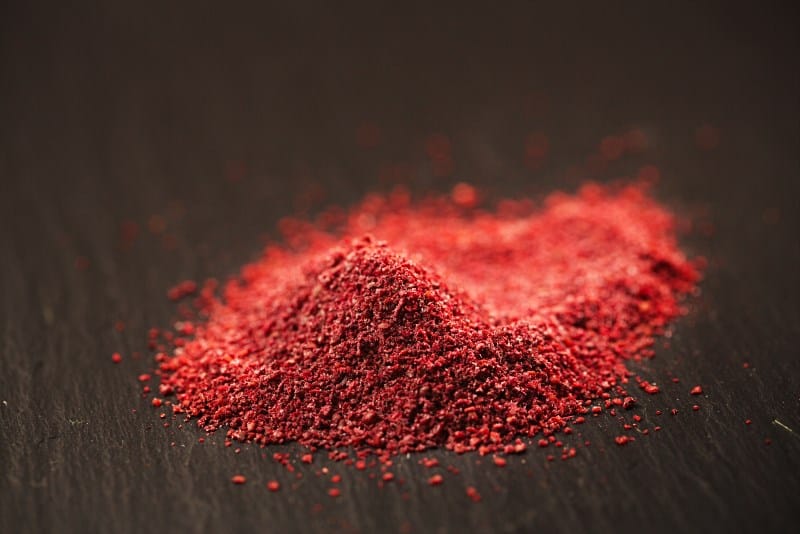 This ruby-colored spice comes from a variety of the sumac plant (not poison sumac). It's used to impart tangy flavor to a dish as it's fresh and tart, close to lemon in this characteristic.

It will remind you of both sharp citrus and vinegar, which is a little surprising for a flower bud. You might expect floral flavors, but instead you'll get a lovely zesty taste. Some people describe it as similar to lemon, but a bit more complex.

Dried, ground sumac is not fine and powdery like cinnamon. It's coarser, resembling something of a shredded or flaked texture.

You can also get whole sumac, which is hard and best ground. The upside is that if you grind it fresh every time you use it, you'll get a brighter, cleaner flavor.

What Can I Use Sumac For?

This spice can be used rather liberally as it doesn't have a flavor that's difficult to marry with other ingredients. One thing you can do with it is flavor oils for sprinkling on salads and snacks like roasted nuts and popcorn.

It's often suggested that sumac be paired with spices like allspice, cloves, coriander and paprika, but it's a good-humored seasoning you won't have trouble using. It's equally infused in savory meals and sweet desserts, just like lemon.

How Long Does Sumac Spice Last For?

Whole sumac will last the longest—several years, in fact, if you store it in a container that no air is leaking into. All spices, whether whole or ground, should be stored this way.

Once you grind it, it will still last a good long time, but you'll probably end up subtracting a year or two from the whole spice shelf life. It won't go bad per se, but it will lose flavor.

What Can I Use in Place of Ground Sumac?

Lemon juice is the replacement of choice if you don't have sumac as it tastes so similar. If you're making a dry spice rub and you can't add liquid, grate the rind and use it in smaller quantities than sumac spice.

Lime can also take the place of sumac, just as it can be a good substitute for lemon, but it brings its own specific flavor not generally found in sumac. This might be no big deal if you're making a marinade for grilled tofu, but it might make a big difference in a dessert or pasta dish.

If you're a little unsure about what to do with sumac, we've got you covered. These videos are going to put you on the right track with vegan dips you already know and love.

Hummus, the quintessential vegan sandwich spread and veggie dip, is one of the simplest and most delicious vehicles for sumac.

Here are the ingredients for this hummus:

This creamy dip is made with fire-roasted eggplant. It's smoky, rich and incredibly satisfying.

Sumac spice is a citrusy seasoning that can be used just like lemon in any recipe, from dinner to dessert. Start with hummus and any vegan dip you fancy if you're new to sumac, but check out other vegan creations like roasted vegetables, pasta salads and couscous dishes for a taste of what this zingy spice can do.