Trying to figure out what spirulina tastes like? That's exactly what we're discussing in this article. We'll tell you about the flavor, texture and uses for spirulina—and what it is in the first place. 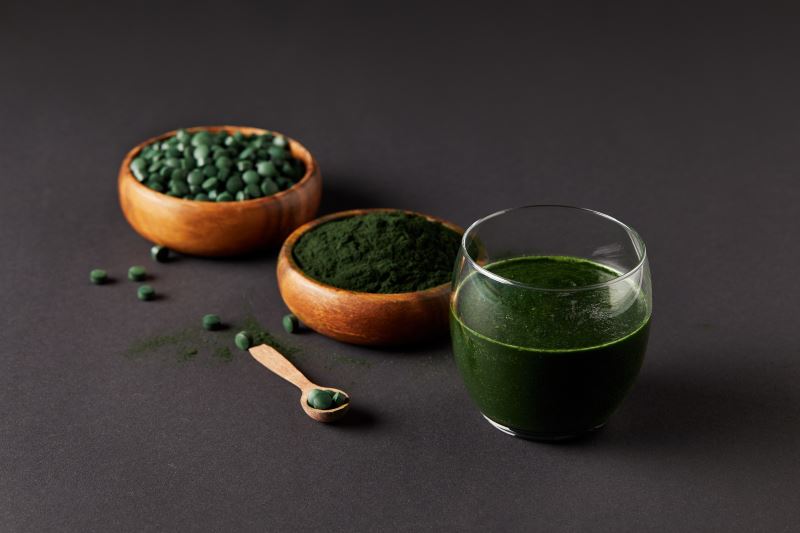 Spirulina is offered on smoothie menus all across the U.S. It's a type of blue-green algae sold as a superfood supplement rich in vitamins, minerals, antioxidants and protein.

Now, the flavor of spirulina inspires many a quizzical look on the first try. It's kind of like seaweed, but it's much earthier, almost to a mucky degree.

You might think that people wouldn't like it, then, but it's actually incredibly popular. It's also usually mixed with sweet flavors and fruits so it's not too intense.

Spirulina can be purchased as a dry powder or in tablets. Usually, it's the powder that's used in smoothies and beverages as it's easy to blend in.

The powder can add a gritty texture to what you're eating or drinking if it's too watery. Aim for thick smoothies with lots of banana, mango and coconut to mask the graininess.

Can I Put Spirulina in Coffee?

Lately, spirulina has been making waves in the caffeinated sphere. Spirulina lattes with gorgeous green hues are popping up all over the Internet.

These lattes are generally sweetened and mixed with vanilla, coconut and other flavors that tone down the earthy taste of the algae.

You can do the same with regular coffee, but perhaps not if you take it black as there won't be anything to mitigate the funky tastes in the spirulina.

How Do You Eat Spirulina?

Besides mixing it into lattes and smoothies, you can make vegan breakfast bars and protein snacks with cacao nibs, goji berries and a little sweetener.

You'll see spirulina in diverse vegan desserts, too. This is largely because the of the vivid and all-natural turquoise to green color it adds, so consider spirulina when you're making vegan Christmas cookies.

Does Spirulina Go Bad If Not Refrigerated?

No, spirulina will not go bad if it's not refrigerated. Like other supplements, it's best stored in a cool, dark place. Any cabinet will do.

Now, if the weather is hot and muggy, it might be a good idea to transfer your spirulina to the fridge. It's not unheard of to do this anyway if you don't use it very often as refrigeration will keep it fresh longer. It's just not absolutely necessary.

Spirulina is more fashionable than ever. Here are a couple of different ways to add it to your diet. Both are super simple and super tasty.

This is a classic smoothie recipe for spirulina. Control the thickness with more or less vegan milk and build on it with shredded coconut, berries and hemp seeds.

Would you eat spirulina pancakes? Dig into these magical, gluten-free pancakes with maple syrup or vegan chocolate sauce for a decadent brunch.

Spirulina is a bit of a strange-tasting algae supplement, but it creates beautiful shades of blue-green in smoothies, lattes and desserts. Any breakfast and baked good you can think of has been enhanced with spirulina. That means vegan smoothie bowls, cakes, cookies, breads and pancakes. Have a full blue-green meal day when the weather's looking blah.