Trying to figure out what celery root tastes like or how to cook with it? In this article, we're talking about taste, texture, recipes and more so you can cook with celery root like a pro. 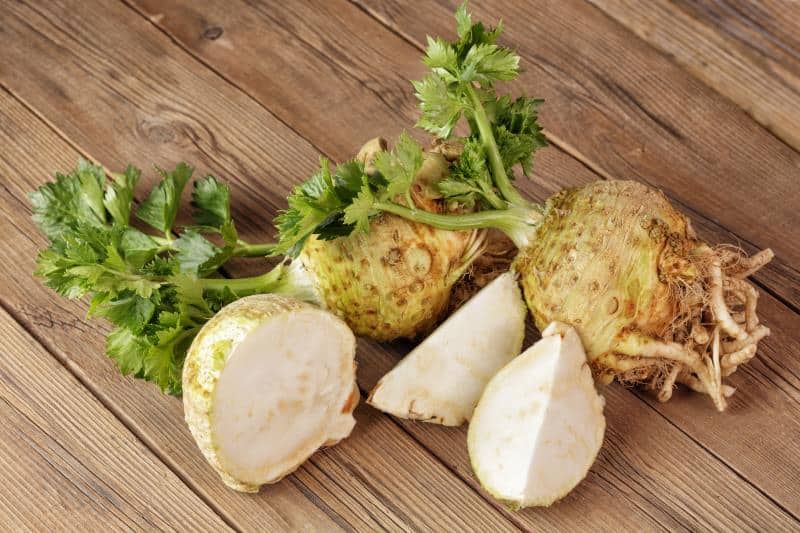 Navigate This Article Using The Links Below
What Does Celery Root Taste Like?
Can You Eat Raw Celeriac?
Celery Root Texture
What is the Difference Between Celery and Celery Root?
What is a Substitute for Celery Root?
Cooking with Celery Root
Wrap Up

Celery root, a.k.a. celeriac, tastes like a cross between a potato and a stalk of celery. It's a little nutty in flavor as well, making it a lovely roasting veggie.

Celery root is altogether rather mild, which is why so many people enjoy it pureed like mashed potatoes as a side dish for dinner.

Can You Eat Raw Celeriac?

You sure can! You can eat celeriac raw or cooked, whichever you prefer. Raw celery root can be treated like raw cabbage or apples in recipes like coleslaw or atop your salad.

You might not be interested in eating raw celeriac like an apple as it isn't sweet, but that's not a common practice, anyway. Just slice it, grate it or chop it up and add it to savory recipes.

The texture of celery root is interesting. Eaten raw, it's crisp and crunchy like jicama. It isn't particularly juicy, but it is moist.

When you cook celery root, it takes on the qualities of cooked potato, becoming more creamy and dense. This is why celery root is thought of like a stand-in for the potato without the heavy starchiness.

What is the Difference Between Celery and Celery Root?

Taste-wise, one of the biggest differences between celery and celery root is in the intensity of flavor. Celery root is significantly milder, though the celery-like flavor is still spot-on.

When you cook with celery, you slice up the stalks and perhaps even use the leaves for flavoring in soups and sauces. Celery root, on the other hand, is a bulbous root vegetable. Celery and celeriac are in the same family, which accounts for their similarity in flavor, but they're used differently in cooking—you wouldn't mash up cooked celery like mashed potatoes.

What is a Substitute for Celery Root?

Potato might be the best substitute for celery root, especially if your recipe is calling for a large amount of it and you don't have any on hand. You may even be able to use parsnips, though you should be aware that parsnips will add a significant sweetness to whatever you're cooking.

If you do use a substitute for celery root, you could potentially add a little chopped celery to make up for the missing flavor. Alternatively, you could sprinkle in a dash of celery seed or celery salt if you have some in your pantry.

To make things simple, we've gathered up some videos that'll show you exactly how to use celery root in an upcoming meal.

Like celery, celery root can also be frozen. Check out our guide to freezing celery.

Celery root is perhaps a little odd-looking, but it's quite a delicious root veggie somewhere between a starchy potato and crisp celery. Some of the best ways to enjoy celery root are blended up in soups or mashed like potatoes, but keep your eyes peeled for other recipes with celery root—once you try it, you won't want to miss an opportunity to eat it.