Did you know that cashews come from bell-shaped pseudo-fruits called cashew apples? We're going to cover everything you need to know about them, including taste, texture and how to prepare them at home. 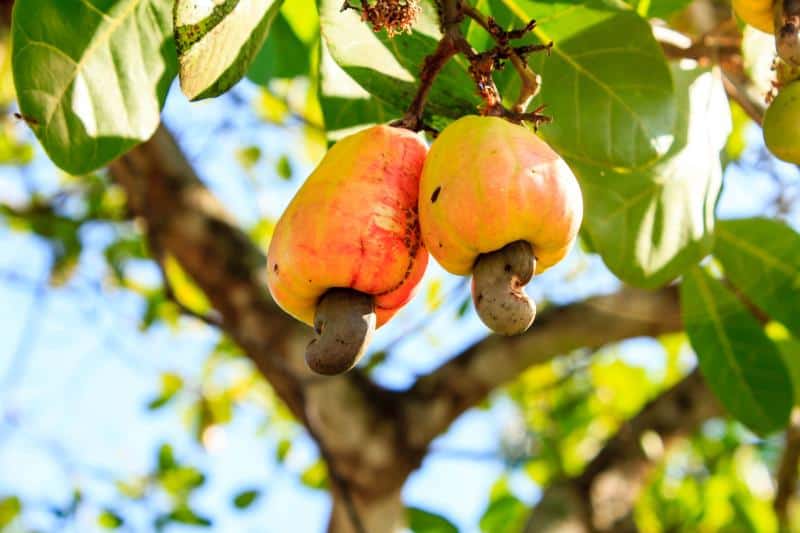 The cashew fruit, or cashew apple, is the fleshy, protective "fruit" out of which the cashew "nut" grows. The flavor of the cashew apple is tropical but not solely fruity.

People often detect citrus, mango and non-sweet fruit flavors in it like cucumber and bell pepper. All in all, it's described as having a sweet to bitter and slightly acidic taste.

You won't find a fruit texture like cashew fruit. It's not hard like the cashew nut, but rather densely fibrous. It becomes juicy as you eat it, even watery.

The cashew fruit is soft but not squishy like mango or guava. It's even a little chewy, which you may not expect. Suffice it to say, the texture is not like what you're used to.

Do You Eat the Cashew Fruit?

We tend to know of the cashew nut as edible, but you can, in fact, eat the cashew fruit. One of the traditional ways to consume it is as a tea. In Jamaica, it's often made into a juice.

Cashew fruit can be eaten fresh or cooked. Dishes that feature it are often curries, soups and chutney. You can braise them, stew them, roast them and blend them up in smoothies, to give you a few ideas.

If you do feel like brewing your own tea, be sure to check out these cast iron teapots.

The flavor of cashew fruit is not difficult to love. If you enjoy mangos and green, juicy non-sweet fruits, you'll likely enjoy cashew apples.

The secret to getting the most out of your cashew apples is to mix them with the right ingredients. In smoothies, some pineapple or banana will bring out their natural sweetness.

If you're cooking with them, try accentuating both the tart and sweet flavors with lemon juice and a touch of sweetener like agave or brown sugar.

Eating cashew fruit is easy. For a fuss-free recipe, chop it up and season it with a few simple ingredients to make a fresh-tasting condiment or side dish.

This recipe makes a snack that's almost like salsa with cashew fruit, jalapenos and salt. In fact, if you finely dice the cashew fruit and add fresh cilantro, a squeeze of lime and diced red onion, you'll have a great vegan taco topper.

The cashew nut, also called the cashew apple, is the edible "fruit" that surrounds the cashew nut. It's soft and sweet with tart and bitter notes that are actually quite pleasant. Enjoy them fresh or add them to your smoothies, cooking and baking. A good starter recipe that's naturally vegan is salsa, so think of vegan burritos and tacos if you come across cashew fruit at the store.