In this article, we'll answer several popular questions on banana peppers. If you've ever asked yourself: "What Do Banana Peppers Taste Like?" or wondered how spicy they are, then you're going to find it helpful... 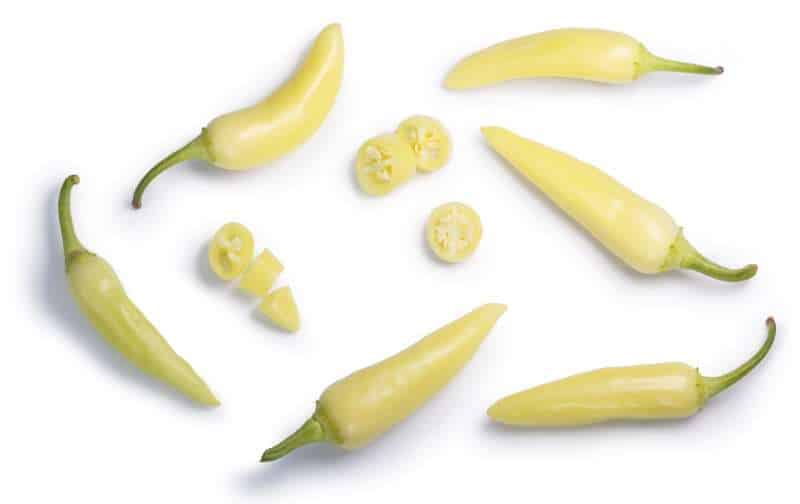 If you're thinking about trying a banana pepper, you're most likely going to be trying the pickled variety that you'll see in stores and at restaurants. These banana peppers are a combination of sweet, salty, tangy, and spicy.

If you're getting them jarred, they aren't overwhelmingly spicy unless you're specifically buying hot banana peppers.

They also keep a crunchy texture, similar to a fresh pepper even after being pickled. This makes them great for adding flavor and texture to salads and sandwiches.

Fresh banana peppers are mildly spicy, sweet, and tangy and can be prepared just like bell peppers. But be careful - there are sweet and spicy varieties and the spicy ones can be pretty intense.

Interested in storing bell peppers? Here's our guide to freezing them.

Are Banana Peppers Hotter Than Jalapeno?

You see, the Scoville rating on a hot banana pepper ranges from 5,000 to 10,000 and a jalapeno ranges from 2,500 to 8,000. So, depending on the individual pepper, you may get something more or less spicy than a jalapeno.

Again, if you're buying the jarred variety they won't be spicy unless they're marked that way.

In the video above, you can see an entire jar of banana peppers being eaten without any sign of them being spicy.

Sweet banana peppers aren't actually that spicy as they only hit a 0-500 on the Scoville Heat Unit scale. As for the 0, some banana peppers don't have any spiciness to them at all.

Either way, most people will find sweet banana peppers to be quite tolerable, even if you don't like spicy food.

Personally, I find that they taste more tangy than spicy. Not offensive at all.

Why Are Banana Peppers Called That?

Banana peppers get their name because of their color and shape. They usually grow around 2 or 3 inches long and develop a curved shape similar to a short banana.

And of course, they're yellow just like the starchy fruit which they're named after.

Also Related: What Do Black Eyed Peas Taste Like?

Now that you've learned all about banana peppers, what are you waiting for?

Go give one a try on your next salad or sandwich.