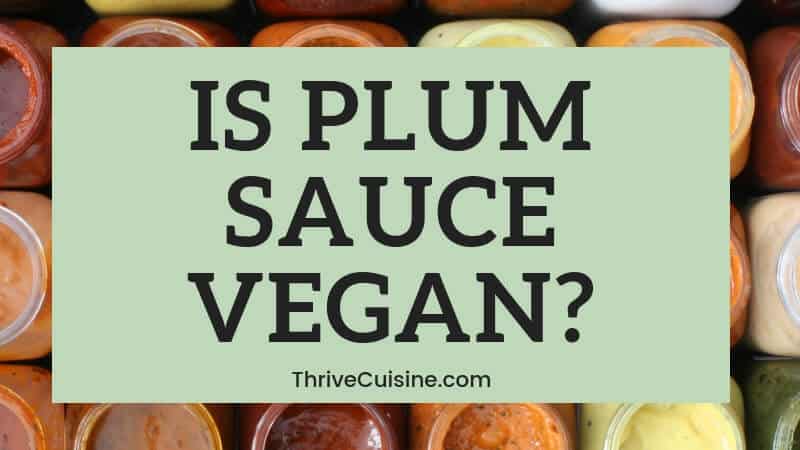 Plum sauce can be purchased or made from scratch, and in either case, it should be a delectable vegan condiment.

On to the ingredients! 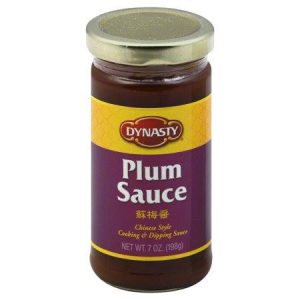 Dynasty is a fairly ubiquitous grocery store brand (linked above).

We’ll take a look at their plum sauce:

One thing that gets a little confusing, however, is what plum sauce has to do withduck sauce. They’re both fruity, a little vinegary and served in Chinese American restaurants.

Are they the same sauce?

Is Plum Sauce the Same as Duck Sauce?

It’s true that plum sauce is sometimes referred to as duck sauce, but at least for U.S.residents, the line between plum sauce and duck sauce depends on where you live.

East Coasters, for example, are used to duck sauce that’s apricot-based and orange in color.It’s sometimes served with fried wonton strips as a complementary appetizer at Chinese restaurants.

For all intents and purposes, duck sauce is not the same thing as plum sauce.Duck sauce tends to be made of apricots, sugar and vinegar while plum sauce is typically made of plums, hoisin and sometimes soy sauce.

Both plum sauce and duck sauce are vegan-friendly.

No plum sauce kicking around your cabinets?You can easily substitute it with these ingredients:

What you use as a substitute will depend on your taste and what you’re eating it with.Start with something sweet, like apricot preserves.For more depth and saltiness, add soy sauce.For more tang, add vinegar.

If you like plum sauce, check ourvegan condiment guidefor more vegan sauces to stock up on.

For tips on eating a healthy, whole food vegan diet, you can print out oureasy vegan shoppinglist full of tips and hacks found on this page only at ThriveCuisine.