In this guide, we’ll address the question: Is Soy Sauce Vegan? We’ll also get into the vegan status of many popular soy sauce brands, such as Kikkoman, La Choy and Amoy. 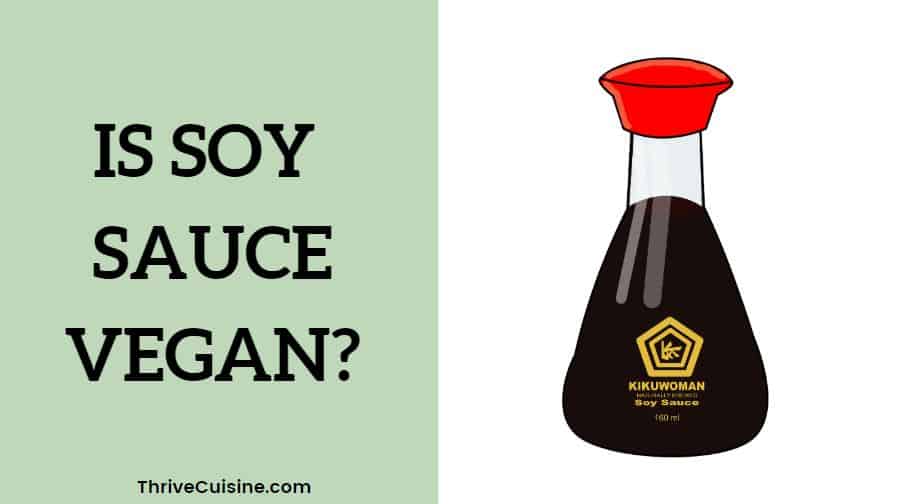 We’ll also answer a common question about lactic acid.Let’s hop to it…

Yes! Rest assured thatsoy sauce is vegan. Ingredients vary depending on the brand, but we weren’t able to find any containing animal products.

But being vegan is about more than avoiding meat, dairy and animal byproducts.It’s a lifestyle that includes steering clear of companies that don’t meet ethical standards of animal treatment, so we’ll be taking a closer look at some popular soy sauce brands below.

For right now, let’s get a little more acquainted with what’s actually in soy sauce and answer the most common questions…

What Is Soy Sauce Made out Of?

Originating in China, soy sauce is made from a base of fermented soy beans, just like tofu and tempeh.Basic additional ingredients are grain products, salt, water and a preservative of some sort.

Soy sauce undergoes a fermentation and aging process, which, according toKikkoman (one of the biggest brands on the market), is a several month-long process.(1)

Check out this short and informative video on how it’s made.It’s an interesting watch…

What Are the Ingredients in Soy Sauce?

Based on our research, there are a few different types of soy sauce on the market, some of which aren’t really soy sauce at all.Kikkoman’s (2) most popular A﻿﻿ll-Purpose Soy Sauce has the following ingredient statement:

WATER, WHEAT, SOYBEANS, SALT, SODIUM BENZOATE; LESS THAN 1/10 OF 1% AS A PRESERVATIVE.

Kikkoman also has a preservative-free version (no impact on the vegan status), but the above is what you’re likely to find in the store.

Some other (less expensive) brands of soy sauce like La Choy rely on sweeteners and colorants to emulate the soy sauce experience.In our opinion, this isn’t the best in terms of flavor profile—even though it is still vegan.

Sometimes, there are ingredients that just sound suspect.What if you pick up a bottle of soy sauce with lactic acid in it?

Lactic acid is found in certain brands of soy sauce, and it’s a big point of confusion. The word “lactic” naturally raises a red flag as it sounds uncomfortably close to “lactose.”

As it turns out, lactic acid is simply a type of bacteria used for fermentation. In other words, it’s no less vegan-safe than yeast. Lactic acid is usually not from dairy or milk, but from carbohydrates such as cornstarch.

This means that soy sauce does NOT have dairy. Lactic acid one ingredient you can officially cross off the shady list. 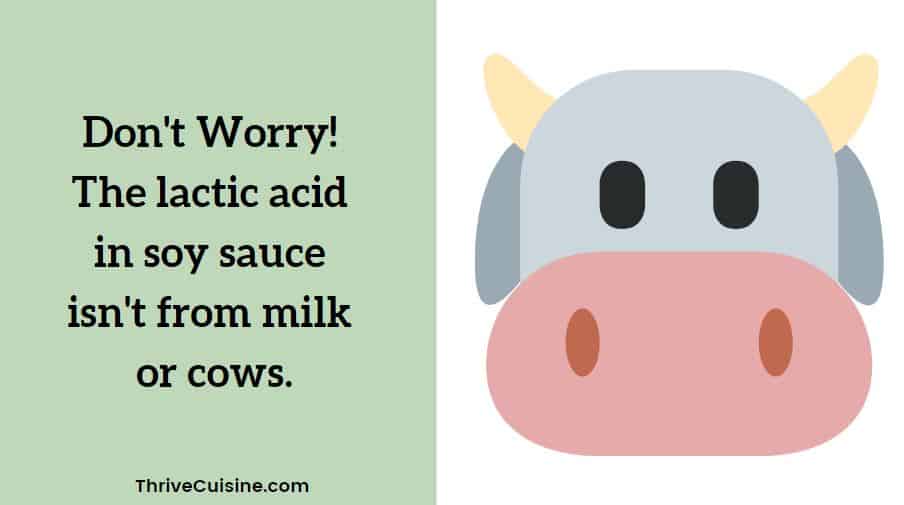 Does Soy Sauce Have Meat, Fish or Shellfish in It?

Even though it has a slight ocean-like flavor from its fermentation process, soy sauce has absolutely no fish. We haven’t come across any soy sauces with meat, dairy, shellfish or animal products of any kind.

We’re going to dive into some specific brands you can find in major grocery stores. We’ll be identifying any potential issues that could arise on your vegan journey. 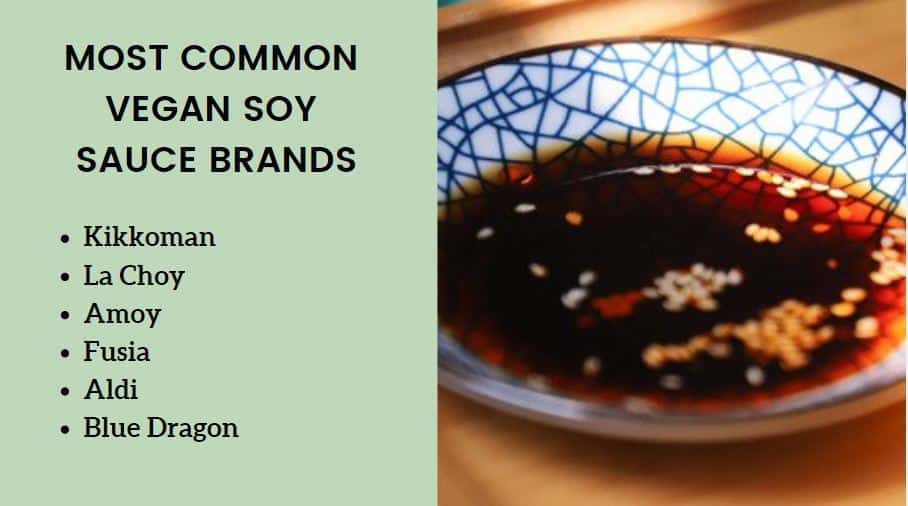 For some time, Kikkoman was conducting animal testing so that they could make shaky health claims about their products. Thanks to dedicated vegan activist groups like PETA, this practice was ended.

If a company supports animal testing and cruelty, it cannot be considered vegan as it goes against the very principles of veganism. This is true even if companies use no actual animal-based ingredients in their products.

That being said, though Kikkoman’s actions were unacceptable, grudges cannot be held forever. For this reason, we’d still say it’s vegan since Kikkoman has no blatantly labeled animal products in its soy sauce.

But we think that Tamari tastes better anyway, so we don’t bother buying Kikkoman.

Yes! Both La Choy Soy Sauce and La Choy Lite Soy Sauce are vegan. Neither products have any animal-based ingredients.

If you were concerned about the “lactic acid” in the lite version, don’t be—not now that you know that lactic acid is vegan.

It’s not the tastiest soy sauce, but still animal-product free.

Amoy Soy Sauce has sugar in it, which may or may not be vegan depending on whether it was produced with bone char. However, we don’t worry about trace ingredients that could go either way. It doesn’t help you or the animals.

In terms of avoiding blatant animal ingredients, the simplest answer is that Amoy’s soy sauce is ostensibly vegan-friendly.

Some versions of Amoy’s soy sauces have lactic acid, just like La Choy. But as we stated, commercial lactic acid is not produced from animal products. Feel free to enjoy Amoy.

It looks like Fusia Reduced Sodium Soy Sauce also contains sugar, but there are no clear animal products or byproducts in it. So from that perspective, Fusia looks safe.

Yup! There are no animal products in Blue Dragon soy sauce and the company even advertises it as vegan/vegetarian friendly.

Of course it’s vegan. It’s no different from any other of the soy sauces on this list. It’s actually most likely private labeled from one of the bigger brands like Kikkoman and gets made in the same exact factory (but we can’t confirm which one).

Yup! Dark soy sauce is just like regular soy sauce. It’s just aged longer and made to be thicker and more concentrated. Nothing to worry about. It’s vegan!

However, strict raw vegans may avoid Nama Shoyu because it’s heated beyond 115 degrees, which is about the cutoff for the raw food lifestyle. But it’s still enjoyed by many vegans and raw vegans alike who don’t mind this aspect of it.

There’s no need to worry about the vegan status of soy sauce, but when it comes to culinary excellence, go for Kikkoman or SAN-J Tamari—preferably the latter.

Fermented soy products such as soy sauce and tamari provide umami in vegan dishes, bringing out whole new dimensions of flavor.They are critical ingredients in the arsenal of any vegan chef.

Feel free to add it toyour shopping list! If you don’t have one, why not download ours?

If you were curious about soy sauce, you’ll love these related articles…