Everyone knows that bacon isn’t vegan. But there’s no reason why you can’t enjoy the flavor and texture of bacon without a real pig and any animal cruelty. We’ve put together some of the best vegan bacon brands you can buy in-stores in this guide.

Ready to check them all out? Let’s go!

Oh – and be sure to read until the very end. We’ve included a short video on how you can make vegan bacon that’s super easy (and the most delicious I’ve ever tasted).

All ingredients are taken from the manufacturer sites and are subject to change at any time! 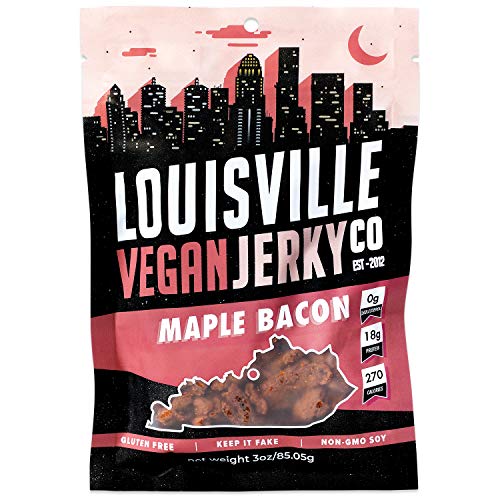 This vegan bacon jerky makes a really great to-go snack. The ingredients indicate that it’s made of the whole soybean rather than being totally processed. I like picking these up in a pinch or for a road trip. 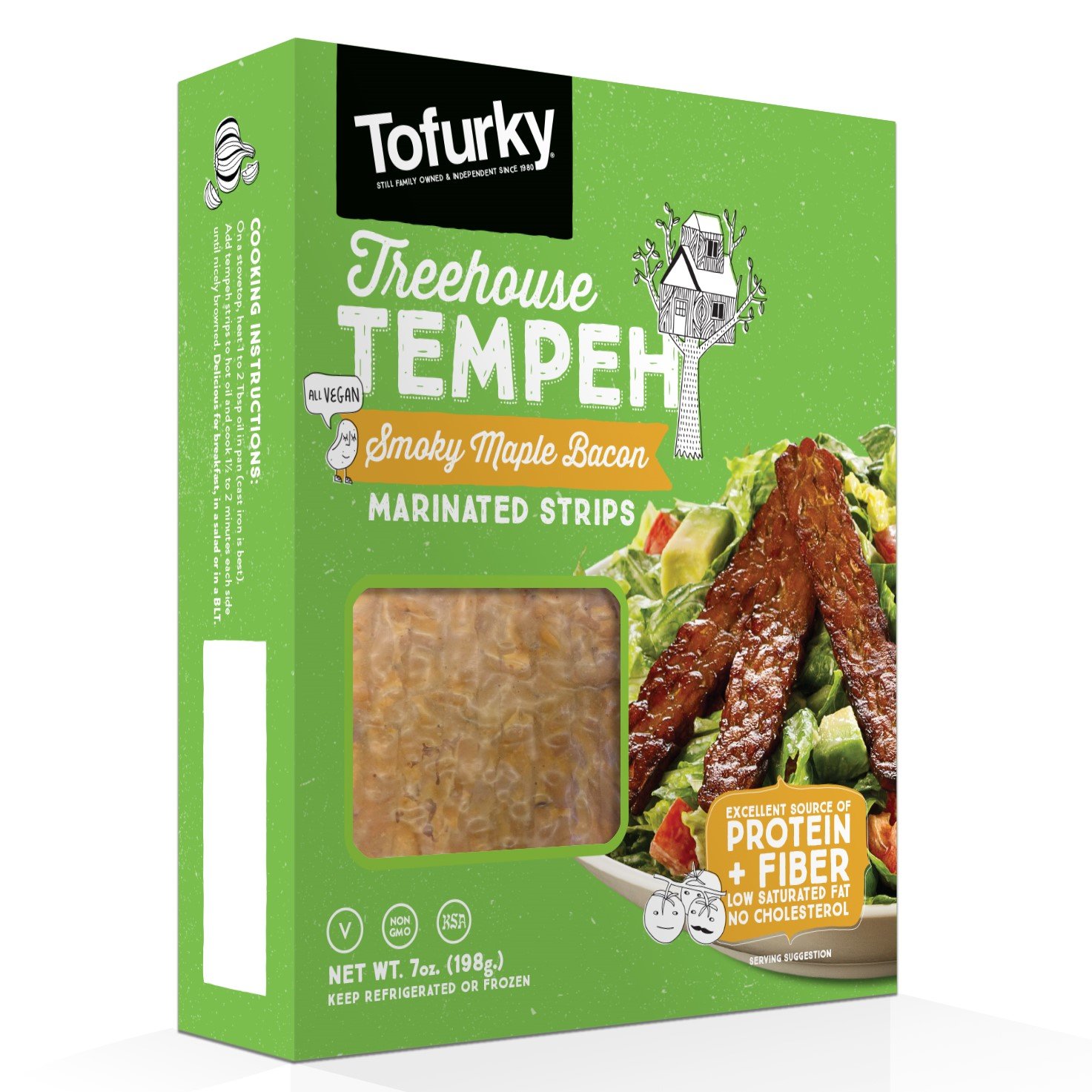 Tofurky is a trusted brand, and they make a little bit of everything to suit your meatless needs.

This bacon is a part of their meatless crew.

It’s made from tempeh, so it has the potential to be extra crispy if you fry it upright and is filled with flavor from the inside out.

It cooks in minutes and is sliced really thin, so you can use it to make sandwiches and to top things without it being overwhelmed by too much vegan bacon if there is such a thing.

It has a smoky maple flavor, so it’s best with breakfast because that maple sweetness goes great with a savory tofu scramble. 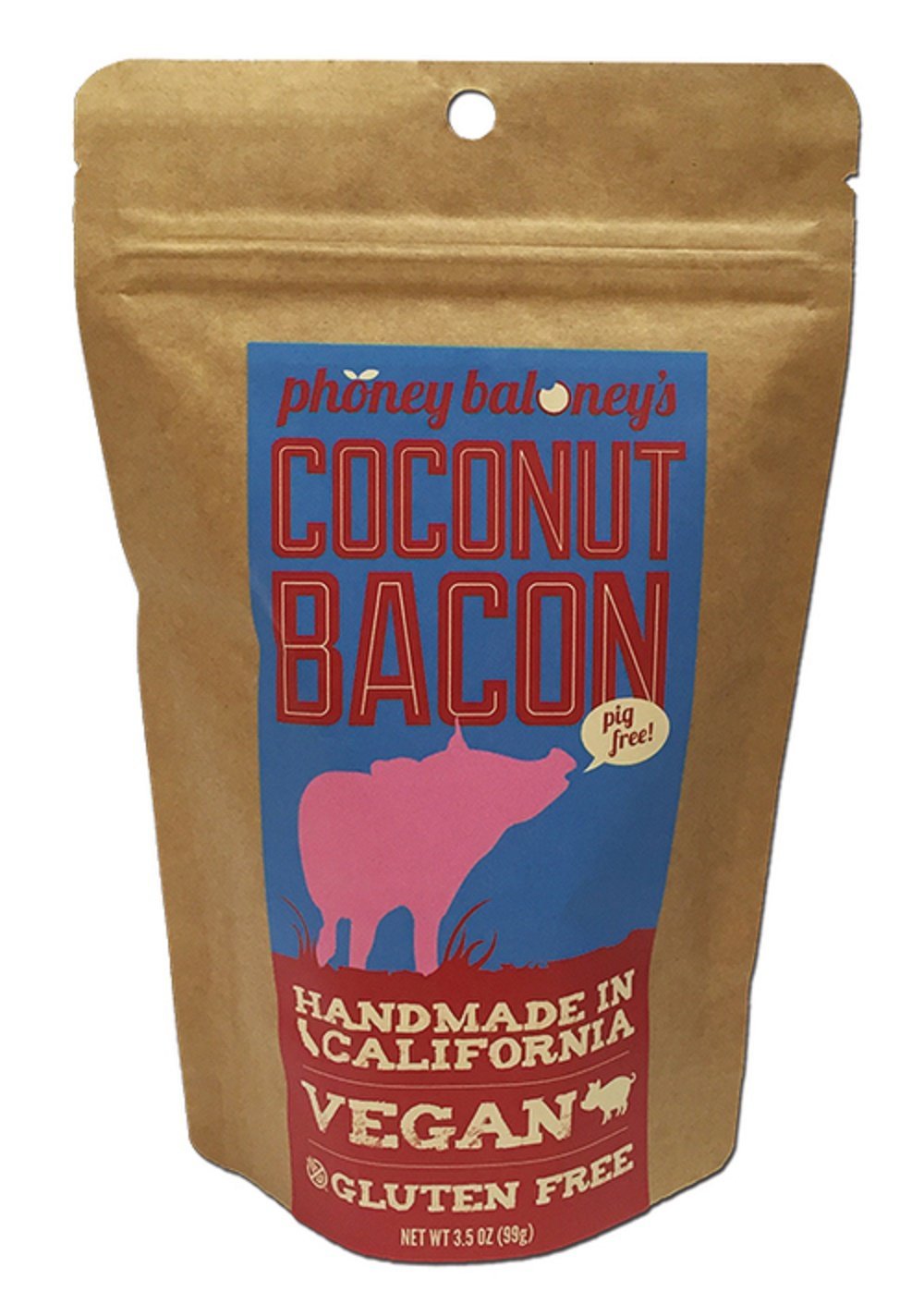 Ok, so moving on to bacon bits.

Some store brands are accidentally vegan, but if you’re still a little skeptical or don’t want something with a bunch of additives and preservatives, these are great.

They’re made from coconut, so you think they would be sweet, but they’re the exact opposite.

These are savory and larger than store-bought bits, and they are a little more expensive, but it’s worth it if you want something fresh with a cleaner ingredient list. 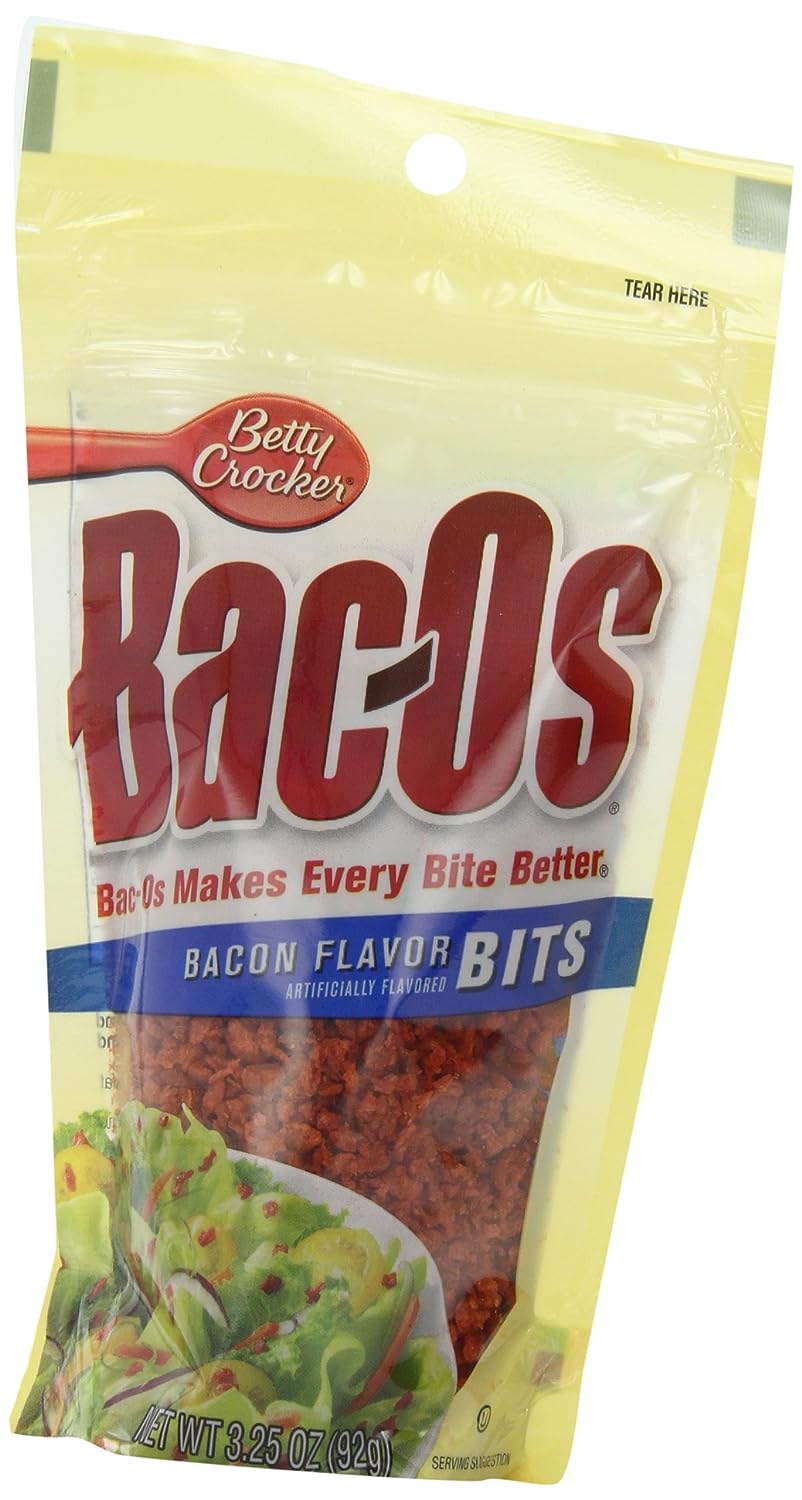 Warning: These aren’t the healthiest option. Mostly artificial ingredients and no nutritional value.

If you’re in a pinch and need something quick, this is a pretty good store brand to buy.

These come in a resealable package, so you don’t have to use them all at once or worry about shelf life once you’ve opened them.

Bac-O bits are actually soy-based, so they contain no meat, but it does contain artificial coloring if you’re concerned about it. 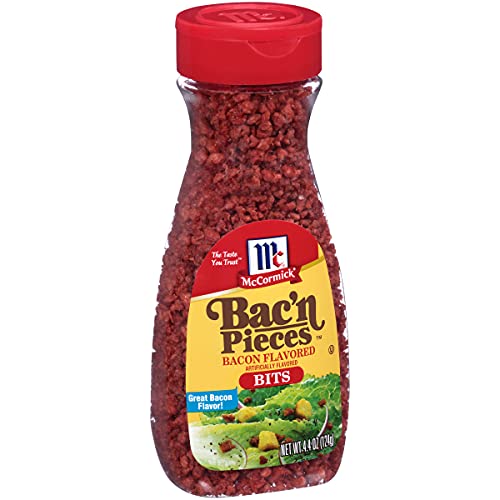 This is another soy-based store brand.

These might even be more popular than Betty Croker because these are literally in every store.

These are nice and crunchy and do have an authentic bacon flavor.

So that can be a plus or minus depending on your preference. These are really tiny, so they’re great on salads or things where you don’t want the bacon to crumble to overpower the rest of the meal.

These also have no MSG, but they do have artificial coloring and flavor.

If you don’t like the ingredient statement, feel free to skip this one, but it might be good in a pinch. The colors can also be controversial, but we always define vegan as not labeled animal products, as do most vegan organizations. 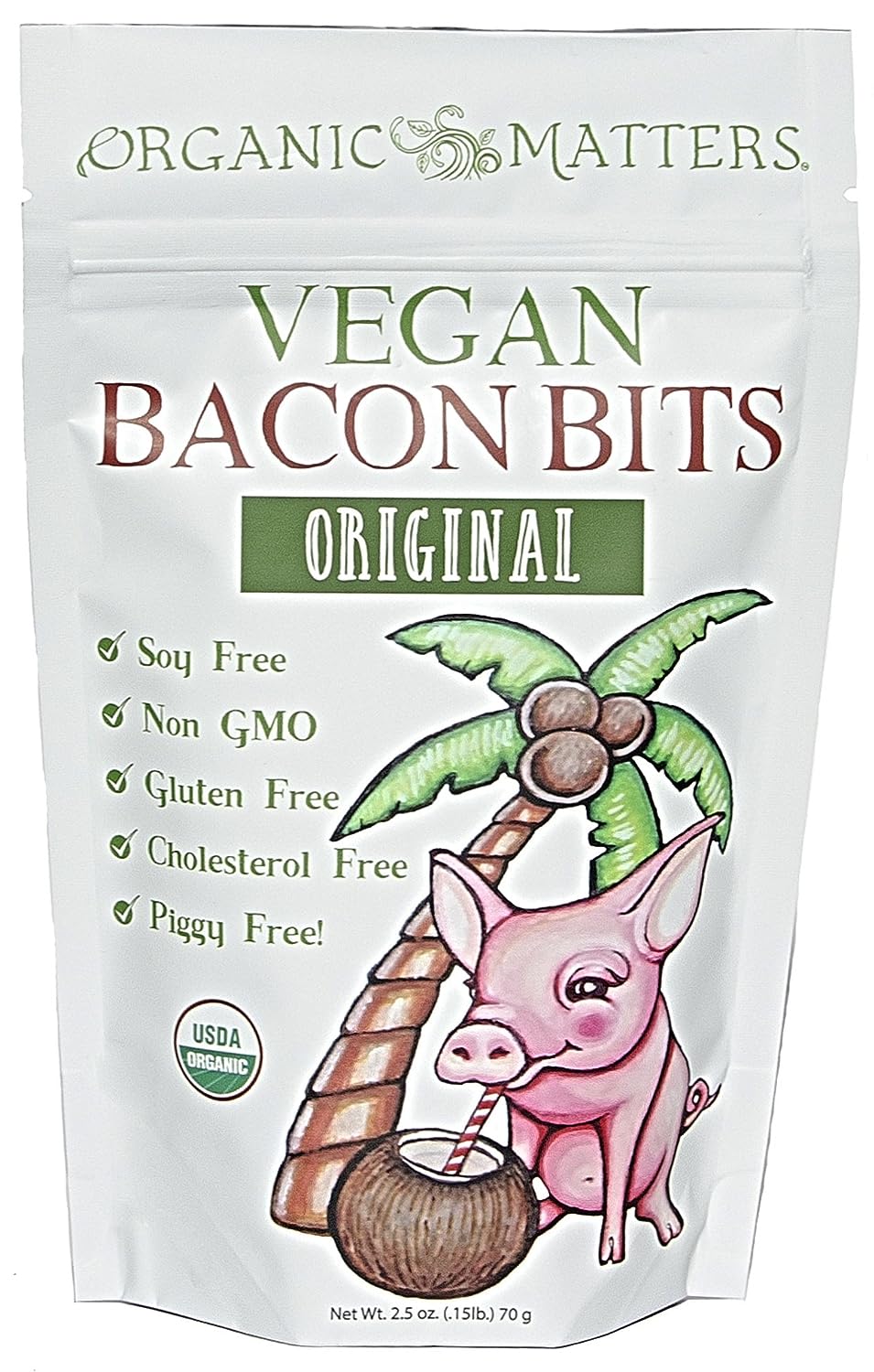 These bacon bits are different than most of the ones on this list because they don’t even contain soy.

These are soy-free, gluten-free, cholesterol-free, and non-GMO. So, they’re pretty high quality.

They’re loosely whole-food-based with the coconut, so if you want to add those extra nutrients in your diet while still getting flavor, these bits have come to save the day.

These are made in small batches by a family-owned business, so consistency is in their name.

They don’t have any extra additives or preservatives, so you’re getting the good stuff when you buy these.

Plus, they come in a chipotle flavor if you want a little extra spice. 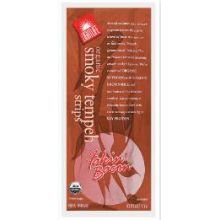 Lightlife also makes a tempeh bacon strip similar to Tofurky, and only theirs has more of a smoky flavor.

It’s still extra crispy and thin-sliced, making them perfect for your lunchtime BLT.

The texture is a little different than regular bacon thought because tempeh can get soft on the inside a little bit. You can crumble these as well, and most find that they work and taste better that way.

They only have a shelf life of about 80 days (it’s tempeh, after all), so when you buy them, you do have to use them fairly quickly so they don’t go bad. 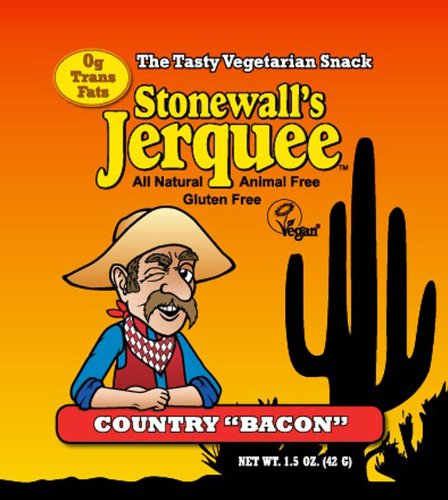 Ok, the last one is jerky.

But it’s a bacon-flavored jerky, so it’s pretty much the same thing.

You can’t crumble this or anything like that, but if you’re looking for a good snack with that savory bacon flavor, these will exceed your expectations.

It’s not GMO and cholesterol and gluten-free. You can also put these in the microwave and heat them, and they will be just like any regular breakfast bacon. If you are in the market for a microwave, check out: Best Microwave Toaster Oven Combo.

They’re also packed with protein, 14g per serving, so you not only get the great taste but a very filling snack. 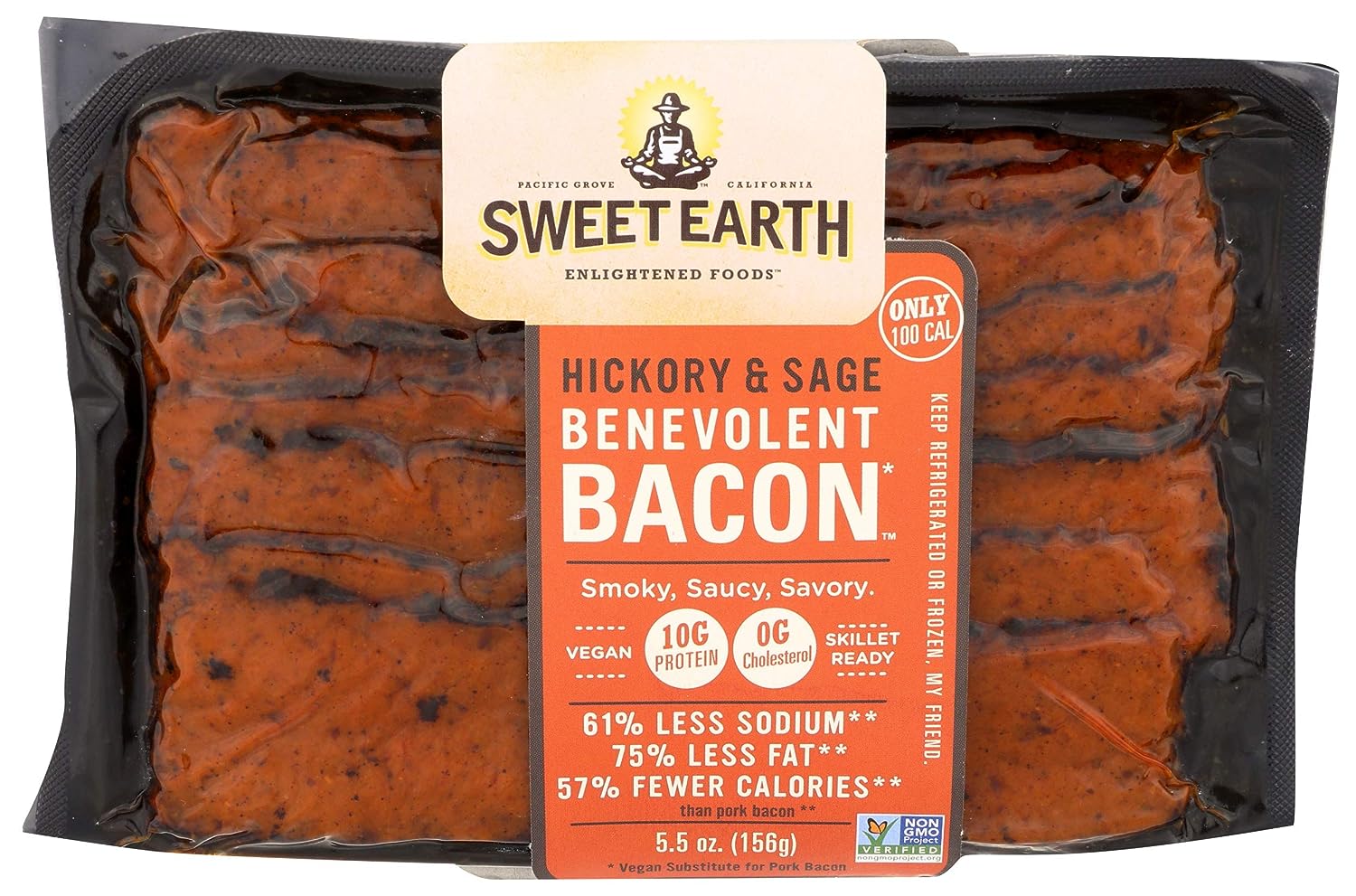 Made of seitan (aka wheat gluten), this bacon is going to be pretty darn close to the rank thing. 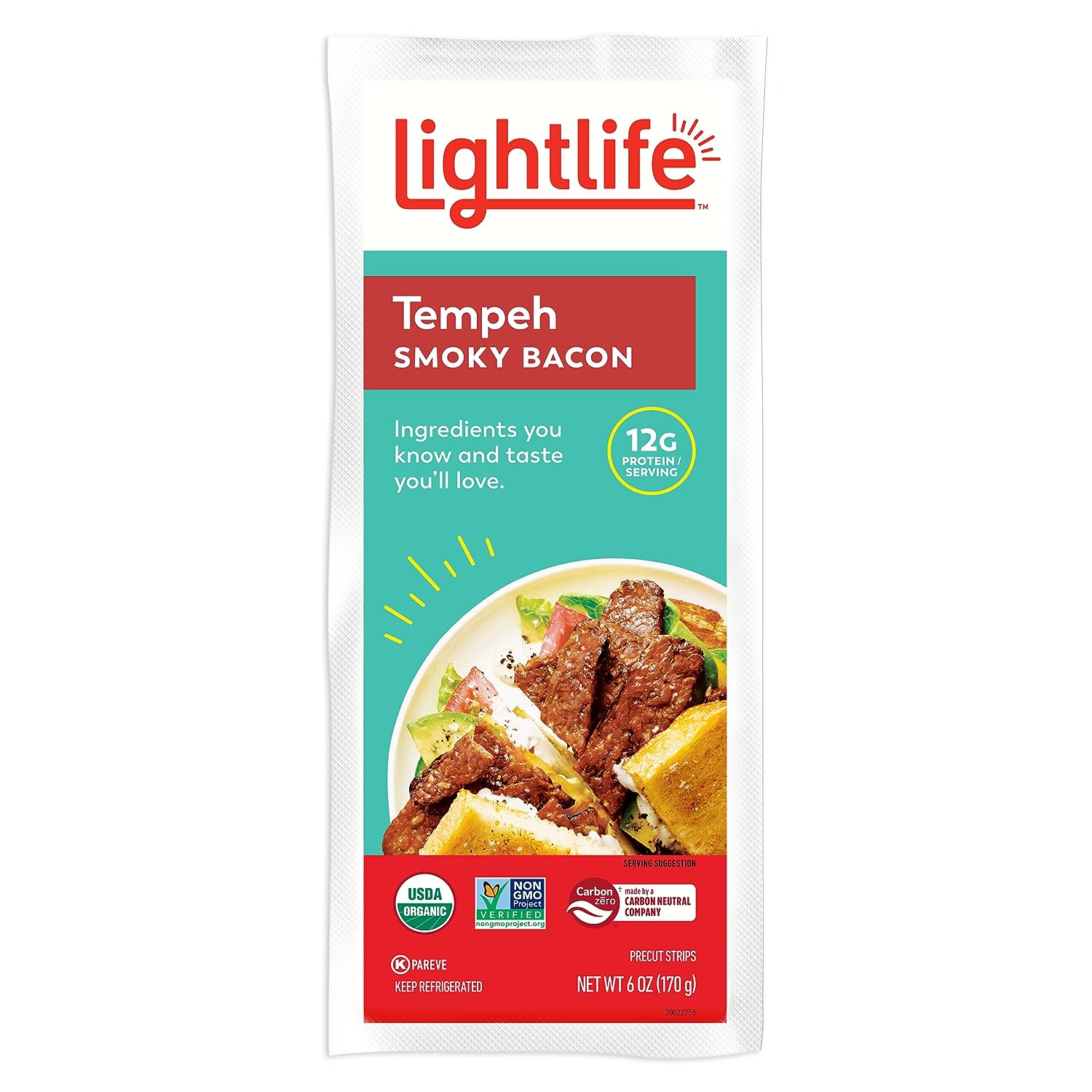 Because it’s made of tempeh, this is going to have a grainy texture which is not all that similar to real bacon. However, this product is much “cleaner” than other mock bacon because it’s made of mostly whole foods. Out of all of the ones on my list, this is probably my all-time favorite.

Curious about where to buy tempeh? Check out the link over there to the left! 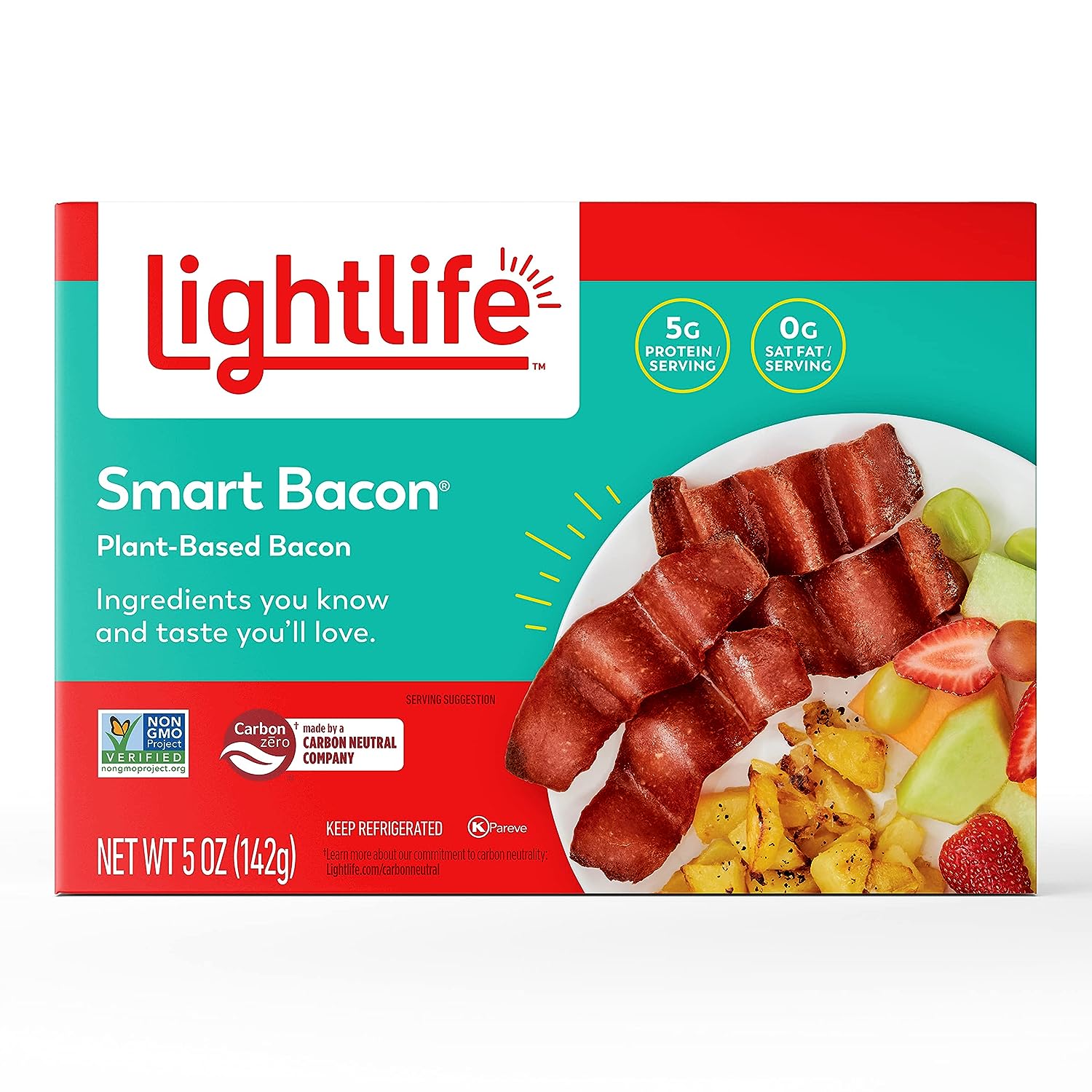 This is a hugely popular choice, but I find it to be a bit too processed for my liking. The main ingredient is soy protein isolate, along with oils and flavors.

This bacon is likened more to turkey bacon if it was real meat.

These are soy-based bacon strips, and they’re good and easy to cook.

You can put them in a skillet or fry them, whichever you prefer. They’re really great for breakfast but many so they’re not so good on sandwiches and other things.

They’re not as high in protein as some other brands, but it does have a pretty good amount for it to be soy-based.

This bacon is also non-GMO, so that’s a plus in addition to being vegan. And on their website, they give you some cool recipes to try with the bacon, so you don’t have to be limited to just using it for breakfast.

These are good but not as great as the gourmet brands like Sweet Earth.

If you want bacon that looks like the real thing and still has a smoky flavor, then seitan bacon will be the way to go.

And Upton’s does it very well. They’re masters of seitan, after all.

It’s crispy, so it crumbles well if you cook it long enough, and it’s great for sandwiches as well if you like your BLT’s extra crispy.

It does have to be cooked within five days of opening, but you can freeze this and keep it until you’re ready to use it.

Also, a portion of these profits go to a pig sanctuary, so why not give it a try. It’s non-GMO, has no trans fat, and has a whopping 15 grams of protein per serving.

This bacon is packed with protein, entirely plant-based, sustainable, and delicious.

With flavors like cumin, sage, and garlic in its base, this bacon is loaded with flavor.

It’s low in saturated fat and is cholesterol-free (as all vegan products are).

In addition to being 100% vegan, it’s non-GMO as well. You can buy it online, but it is also sold in stores.

So, it’s good and easily accessible. It’s described as crispy and authentic.

The reviews don’t necessarily say that it tastes like the real thing, it doesn’t have a porky flavor, but it is very smoky and savory.

From my experience, it’s even more delicious.

These are 100% plant-based bacon bits.

They’re soy-free, gluten-free, and non-GMO. Again, these are a great bacon bit if you’re a little skeptical about the store brand and you’re not in a pinch for time.

Though these are eligible for prime on Amazon (at the time of writing), you won’t have to wait too long. These are air-dried legumes.

So, they’re a good source of protein and amino acids.

And they’re shelf-stable, so you can also these in the pantry. Their site also says you can add water to these and make them a dip, so they’re very versatile.

These bacon bits are a little different because they’re grain-based, unlike most.

It’s almost like a cereal. That doesn’t take away from their flavor or quality, but it makes them stand out in the crowd.

They use the smoke flavor to give them that bacon-like taste. These are Non-GMO and have no trans fats or cholesterol.

These are great for salads and anything you want to add bacon flavor to because it’s a grain, so it’s not insanely crunchy and doesn’t stand in the way of the texture of the meal.

If you’re looking for a cheap and easy way to make veggie bacon at home, then you’re going to love this recipe.

It’s vegan bacon made totally out of rice paper.

Give it a watch! It’s a relatively short and simple process, but the end result is amazing.