Are marshmallows vegan? We’ll answer all your questions and see if we can find some vegan brands of marshmallows below…

No, marshmallows are not vegan.

The main reason for this is that they contain gelatin.

Gelatin is a gel substance created from animals’ skins, hooves, tendons, and ligaments, placing it in the non-vegan category. They wouldn’t even be considered vegetarian!

Although rarer today, some marshmallows may even have eggs – another non-vegan ingredient!

If you’re looking to grab some vegan marshmallows in a pinch, use the links below to click over to Amazon to see the products we recommend:

Is There Vegan Gelatin?

If you’re wondering, there is a vegan version of gelatin called agar-agar. You can learn more about it in our article on vegan jello

Can You Get Vegan Marshmallows?

Absolutely. There are several brands of vegan marshmallows that exist and they’re becoming more and more readily available. 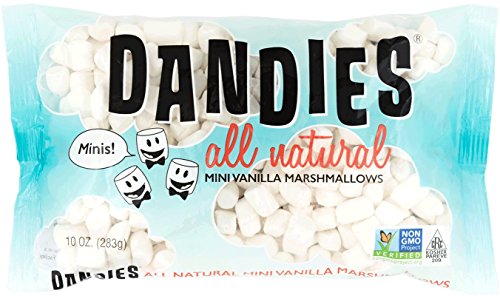 For your convenience, we’ve gone through every marshmallow brand we could find and revealed their vegan status below…

Which Brands of Marshmallows Are Vegan?

Here’s the breakdown of vegan and vegetarian marshmallows…

**You can read more about the Trader Joe’s Marshmallows here…

What Are Vegan Marshmallows Made Of?

Here are the ingredients in one brand of vegan marshmallows (Dandies)…

Trader Joe’s vegan marshmallows have a nearly identical ingredient statement. We would suspect that Trader Joe’s is getting their product from Dandies as a private label agreement.

Needless to say, these are the ingredients you’ll find in most brands of vegan marshmallows.

Other less popular brands may have coconut or other unique flavors.

When words like “fluffy” and “yummy” being thrown around freely, you know they’re good.

Can You Melt Vegan Marshmallows?

Vegan marshmallows do melt, but they may not become as “oozing” as the regular kind. However, they’re still delicious on a s’more or eaten just the way they are.

What Are the Main Ingredients in Marshmallows?

The main ingredients in regular marshmallows (non-vegan) are usually just sugar and cornstarch. You’ll find that the other ingredients like colors, flavors and gelatin make up less than 2% of the ingredient, but that doesn’t mean that they’re cruelty-free and vegan!

Do Marshmallows Have Meat?

Technically speaking, they don’t have “meat.” However, regular marshmallows still have animal products in the form of gelatin which, as we already mentioned, is made from the bones, skin, and cartilage of animals.

Most commercial marshmallows today do not contain eggs. This goes for the vegan and non-vegan variety.

Do Marshmallows Have Dairy?

Marshmallows do not usually have dairy products in them. This is true for both vegan and regular marshmallows.

Do Marshmallows Have Soy?

The two main vegan marshmallows we’ve listed here (Trader Joe’s and Dandies) have soy protein. However, we haven’t seen soy in any normal marshmallow ingredients. This means if you’re a vegan with a soy allergy, you won’t be able to enjoy them.

Are Marshmallows Made of Bones?

Since gelatin is made of bones, marshmallows also have bones in them! The bones aren’t stuffed directly in the marshmallows, though. They’re boiled along with other animal parts to reduce to a powder known as gelatin.

Since there’s no pork from gelatin, vegan marshmallows are classified as Halal. Fantastic news if you are craving a s’more.

To date, the original Nutella is not vegan, but many hazelnut spread brands are just as good. We did an entire article on vegan Nutella here, which you can check out!

Sort of. The important consideration if you’re Muslim is whether or not pork gelatin has been used in the product. Your best bet is to go with any vegan marshmallows on this list!

Yes! And they even sell vegan ones. You can grab them here via Amazon’s Whole Foods section.

That depends on whether or not you’re a vegan who avoids honey. Some graham crackers will have honey, rendering them in the “not vegan” category. However, we have a list of vegan graham crackers without honey right here.

Most peanut butter brands and products are vegan, but you need to be careful of the less common ones with honey.

See this article for more information: Is Peanut Butter Vegan?

We’ve learned a lot about marshmallows today! It’s not all good news, but give Dandies or the Trader Joe’s brand a try if you get out there.

Here’s to a vegan campfire!

For more vegan tips, check out our shopping guide here.

Pin this image below…