Have you been looking for fruits with names that end in “R”? If so, then this article is for you! We have listed all of them here, along with a brief description. Read further to learn more!

Cucumber is mostly considered and consumed as a fruit, but we’re including it on this list because botanically, it is a fruit. It is a climbing vine that belongs to the cucurbitaceae family. There are generally three types: slicing, pickling, and seedless. It is a staple in salads, sandwiches, pickles, and soups.

As the name suggests, this fruit is native to Africa and is in fact a traditional fruit in many African countries. It is initially green and glossy during the summer, but eventually, they mature into unevenly-shaped tan plums with remarkably fleshy pulp and pretty large seeds.

Known in South America where it is a native of as pepino dulce (literally, sweet cucumber), this fruit resembles a melon in color, but its flavor is commonly likened to that of honeydew or cucumber. In countries like Colombia, Peru, Chile, and Ecuador, it is typically consumed as a fresh fruit snack, although it also goes very well with other fruits.

Pear is one of the most popular fruits consumed worldwide. It is native to the coastal and mildly temperate areas of Asia, North Africa, and Europe, although today, an overwhelming 68% of the world’s pears are produced in China. Typically consumed fresh, pears may also be dried, canned, or made into juice.

Although a fruit, prickly pears actually belong to the cactus family Cactaceae, native to Mexico. The fruit is edible after thoroughly removing the outer layer. In some regional cuisines, it is cooked into appetizers, salads, soups, bread, and desserts. But besides its culinary use, prickly pears are also used in dye production, fuel, and as a source of “vegan leather.”

We have decided to include sweet peppers on this list because botanically, they are considered fruits although we know and consume them as vegetables. Also known as bell peppers due to their shape, they are native to Mexico and other Central American countries. They are typically consumed as a salad along with other vegetables, pizza toppings, and may be cooked into various dishes. 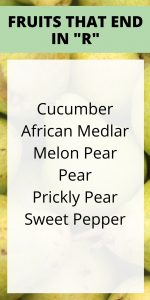