Are you looking for all fruit names that end in a vowel? Look no further. We have come up with a complete list for you along with a brief description.

This flexible fruit is probably one of the most universally well-known fruits in the world. The apple fruit originated in Central Asia, although today, it is cultivated worldwide. The highly nutritious fruit is linked to several health benefits, including lower risks of heart diseases, diabetes, and even cancer.

Avocado in recent years has been widely considered a super fruit. This South Central Mexico native is classified botanically as a berry. It is sought after because of its high amounts of healthy fat, vitamins, and minerals, and its flexibility as a culinary ingredient. It can

Just like the avocado, bananas are also botanically considered a berry. There are various varieties of this fruit, varying in color, size, shape, taste, and nutritional contents. In many countries, bananas that are meant for cooking are called plantains, as a way to distinguish them from dessert bananas.

Cantaloupe is a variety of melon, particularly the muskmelon species. It is also called a rockmelon, sweet melon, or spanspek. It is commonly eaten fresh, in a salad, or sometimes as a dessert with custard or ice cream.

Date palms are widely cultivated in North Africa, the Middle East, and South Asia. These trees are grown for their oval-cylindrical fruits called “dates,” which are a staple food in the Middle East. They are filled with a wide range of essential nutrients, potassium, and sugar.

Unknown to many, grapes are in fact berries in terms of their botanical classification. These fruits are eaten fresh, but they are also grown to be used in wine production, jams, juices, raisins, vinegar, and many others. There are various varieties and cultivars, most are high in water, carbohydrates, and protein.

Although the Kiwi fruit is commonly associated with New Zealand, it is originally native to China. In fact, in 2018, half the world’s kiwis were produced by China. Like most fruits, Kiwis are usually eaten fresh, but also as an ingredient in making juices, desserts, and candies.

There are many citrus fruits that are called limes, hence, there is a difficulty in ascertaining what exactly lime fruits are. Some common examples are the key lime, Persian lime, desert lime, and many others. As citrus fruits are, limes are a rich source of Vitamin C.

This tropical fruit is mainly grown in China, India, and Southeast Asia. Lychees are highly-distinguishable because of their pink-red skin which is inedible, and its white, fleshy inside. There are many Chinese and Asian desserts that feature lychees as the main ingredient.

This tropical fruit is another import from the South Asian region, although it is now grown in various parts of the world with a tropical climate. Mangoes are quite flexible. While tasting great fresh, they are also a popular juice flavor, as well as in cocktails, ice creams, cakes, and other desserts.

Various members of the citrus family are referred to as Orange, mostly originating from China and some parts of South Asia. Today, most of the world’s sweet oranges are produced in Brazil, mostly for juice production. One of the most popular fruits worldwide, it is used to flavor candies, desserts, and even medicines.

The name “Papaya” came from “papaw”, the plant’s name in the Carib language, which tells us of the fruit’s South American roots. The unripe fruit is cooked as a culinary ingredient in some cuisines, while ripe ones are eaten fresh.

Pineapples are indigenous to South America, where it has been cultivated for many centuries. Today, most of the world’s production of this popular tropical fruit is attributed to Hawaii, Costa Rica, Brazil, and the Philippines. Pineapples are mostly water (86%), but also contain carbohydrates, protein, and a negligible amount of fat.

Pomegranates are commonly associated with the Middle East and the Meditteranean, where the fruit has been cultivated since ancient times before it was introduced to Spanish America and the rest of the world in the 16th century. Today, this fruit is valued as a juice flavor, as well as a culinary ingredient used in baking, meal garnishes, wines, and other alcoholic beverages and cocktails.

Pomelo is a large, natural, non-hybrid citrus fruit that is native to Southeast Asia. The fruit is reminiscent of sweet grapefruit. It can be consumed fresh just like oranges and other citrus fruits, and it features prominently in many Southeast Asian cultural occasions. As a citrus fruit, it is a great source of Vitamin C.

Quince is the only member of the genus Cydonia which belongs to the Rosaceae family, which apples and pears also belong to. The fruit is native to Western and Central Asia. The fruits are left on the trees until they are ripe, at which point they are harvested and consumed fresh.

Tangerine is a collective name for various orange-colored citrus fruits, including the Mandarin Orange. They are commonly distinguished from oranges in that they are smaller and less rounded. They contain mostly water, carbohydrates, and some protein and fat, although their greatest nutritional benefit is it is a great source of Vitamin C. 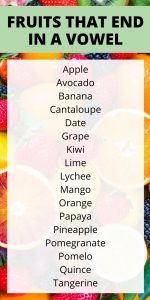