Are you here to look for fruits that end in the letter “A”? Then you have found the right article! We have come up with a complete list for you. Read further to learn what these fruits are, what they’re like, and where they can be found.

Cultivated in Colombia, Ecuador, Peru, and Brazil for its edible fruit, this fruit has yet to gain substantial popularity outside its home region. The fruit is yellow in color and egg-shaped, commonly made into jams and juices.

This fruit is native to the Amazon rainforest, hence covering Brazil, Colombia, and Ecuador. Presently, it is not yet widely cultivated and generally underutilized despite its attractive properties. The fruit is considered too acidic to be consumed directly, but it’s usually processed and turned into juices, marmalades, ice creams, and desserts.

One of the most consumed fruits in the world, in fact, second only to tomatoes, bananas are highly valued because of their taste and rich nutritional content. Many varieties and cultivars exist, varying in size, color, and shape.

Biriba is a fruit that belongs to the custard-apple family. Although also known as wild sugar apple and aratiku, the Brazilian name Biriba is the fruit’s better-known name. The pulp of the fruit is sweet and very soft, sometimes compared to a lemon meringue pie.

Carambola is the alternative name of Star fruit, a tropical fruit native to Southeast Asia but also grown in the Americas and other tropical and subtropical regions. The fruit is remarkably sour, eaten fresh but may also be made into relishes and jams.

Also spelled chirimoya, this fruit is believed to have originated from Colombia, Ecuador, Peru, Bolivia, and Chile, and later spread to many tropical and subtropical regions. The fruit belongs to the same category as soursop. It is sometimes also called a custard apple because of its flesh’s creamy texture.

Widely cultivated in South America for its fruit, feijoa is also called pineapple guava and guavasteen. The fruit is about the size of a regular chicken egg. It is typically described to be juicy, sweet, and aromatic, and commonly likened to pineapple, apple, and mint.

Gandaria is the more common name for the fruit that is known in English as mango plum, native to Southeast Asia. It belongs to the same family as mango and cashew. The fruit looks like a mango, and once mature turns orange/yellow. The taste varies from sweet to sour, comparable to an Alphonso mango.

Also known as sweet granadilla or grenadia, this fruit is native to the South American continent. Outside its native region, it is also grown in Africa and Australia, where it’s known as passion fruit. The orange or yellow-colored fruit has a hard and slippery outer shell, while the inside is filled with gelatinous black seeds.

Known to the English-speaking world as soursop, Guanabana is native to the tropical regions of South America and the Caribbean. With an aroma that is reminiscent of a pineapple, the flavor is citrusy with a combination of strawberries, apples, and bananas. It is commonly eaten fresh but is also made into juices and jams.

This tropical fruit is native to and cultivated in South and Central Americas. The round-shaped fruit can vary in size and has rough, typically bitter skin. Inside, the sweet pulp may vary from white to yellow to pink, depending on the variety and maturity. It also contains numerous seeds which also vary in hardness.

This Brazilian native is purplish-black in color and grows directly on the tree’s branches. It has a white pulp, which is eaten raw but is also used in the production of jams, juices, jellies, and even wine. Besides its culinary use, the Jaboticaba tree is cultivated as a bonsai.

The fruit is native to South America and the Caribbean, in fact, the name came from the Carib language, “papaw”.  Besides being eaten ripe and uncooked, the fruit also has many culinary uses in many cultures.

The English name for this fruit is Dragonfruit, although Pitahaya (or Pitaya) is also common. This fruit is cultivated in many tropical and subtropical regions of the world. The fruit is often likened to the kiwifruit because of its black, crunch seeds. Besides being eaten raw, it is also used to flavor and color juices.

Satsuma is a type of citrus that is semi-seedless and easy-peeling. Although originally Chinese, it has become quite popular in Japan. It is considered to be one of the sweetest fruits in the Citrus family. Its size is like that of mandarin orange. 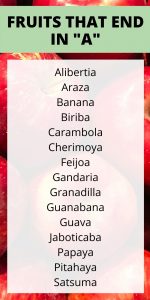