In this article, we're discussing saffron. We'll tell you what this spice tastes like, how to store it for maximum freshness, and what you can substitute for it in a pinch. Stick around for cooking tips that'll revitalize your recipe game (and your taste buds). 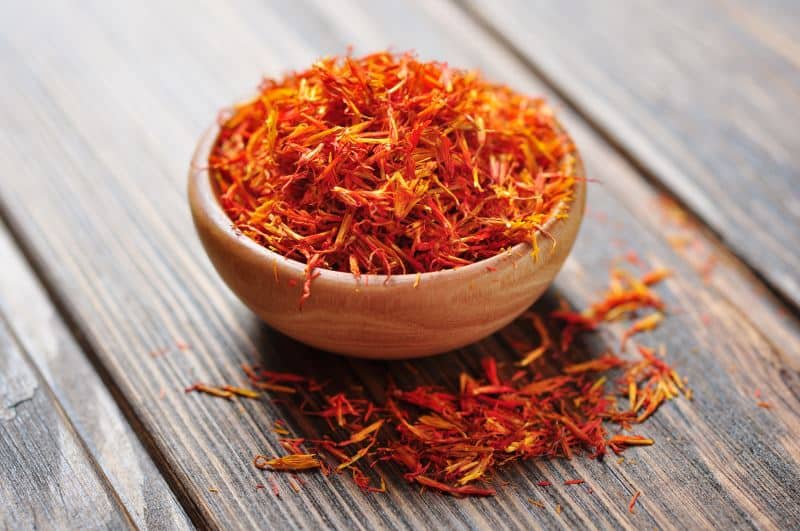 This is a powerful spice with a mixture of pungent, floral, woody and sweet tastes. You may get notes of honey as well as a distinct earthiness. By itself, however, something about saffron can come across as plasticky or like chlorine to many people.

Interestingly, one of the most potent chemical compounds in saffron corresponds to the aroma of hay, which comes through strongly when combined with other ingredients in a dish. All in all, this is a nuanced spice, the intricacies of which are highly sought after.

More expensive than gold by weight, saffron threads come from the saffron crocus flower (Crocus sativas, as it's officially called). The spice is made up of the stalks of the flower, or the styles.

The threads are fragile and crisp when dried, but when they soak up liquid they become soft and add a delicate texture. You can also purchase ground saffron, which is light and powdery.

What Does Saffron Go With?

Saffron is famously used in a Spanish dish called paella, which is not traditionally vegan as it contains meat and seafood. But we're going to show you a spectacular vegan version below.

This spice can be used to flavor rice, soups and vegetable sautes, but it can also be added to desserts. It's excellent with ingredients like citrus, pistachios, garlic and spices from earthy to floral.

Does Saffron Get Old?

All spices will get old eventually, which just means that they'll become dull-tasting. Because saffron isn't cheap, you'll want to make sure you're storing it properly so that this doesn't happen too quickly.

A glass or non-plastic container is a good choice for preserving saffron. It should be airtight and kept out of direct sunlight. Since whole spices last longer than ground spices, it may be worth buying the threads for the sake of freshness.

What Can You Substitute for Saffron in a Recipe?

It's said that turmeric can act as a reasonable substitute for saffron in a recipe, though turmeric will be earthier and lack some of the floral nuances in saffron.

Still, many people feel that turmeric isn't quite up to the task, but also that nothing can really replace saffron. In the end, it is a unique spice.

What to Use Saffron In

We're linking some videos that are going to help you jump right into cooking and baking with saffron. You'll see that it's an easy spice to work with as it goes with so many familiar ingredients.

This vegan paella is so simple and requires no mock meats, though you can certainly add them if you like.

Swedish lussebulle is an excellent accompaniment to your afternoon coffee or tea.

Make it with these ingredients:

Saffron is a strong spice that tastes woody, pungent, floral and honey-like. Storing it well is important for protecting its flavor, which is one that's sure to inspire you in the kitchen. Share the inspiration and serve gorgeous vegan paella to your dinner guests.