We've seen the green paste, but what does real wasabi look like, and does it taste the same? In this article, we're going to answer these questions and tell you everything you need to know about wasabi taste, texture, cooking and even desserts. 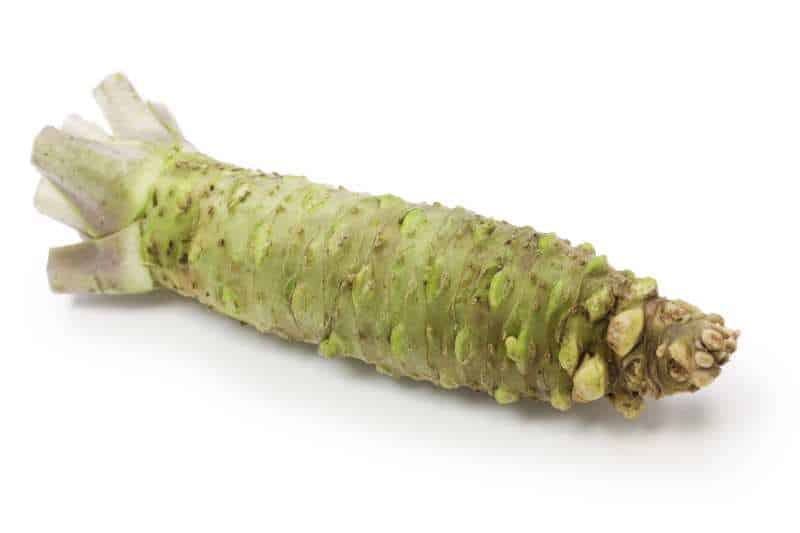 Navigate This Article Using The Links Below
What Does Real Wasabi Taste Like?
Wasabi Texture
What Color Is Real Wasabi?
How Spicy Is a Wasabi?
How to Make Wasabi
Wrap Up

While the thick green paste served on the side of your veggie sushi roll is hot and spicy with a sinus-clearing zing, real wasabi is a little bit different.

Wasabi in its natural root form is herbaceous in a way that wasabi pastes and powders are not. Basically, wasabi root tastes fresher and more vegetably than prepared wasabi in restaurants.

The outer texture of the wasabi root is knobby. The whole root is hard, which gives you the ability to grate it like a carrot.

Wasabi is also smooth and creamy in texture, especially when pureed. It shouldn't be watery or you might be eating horseradish instead.

What Color Is Real Wasabi?

On the knotted outer side, real wasabi is light green to a muddy greenish color mixed with brown and whitish spots. Inside, wasabi is a whiter color with a pale green ring around the outer side.

Grated wasabi root will be light green. It won't be a brilliant or neon color, but it will be similar to the green of wasabi paste.

How Spicy Is a Wasabi?

Though it does have the same unique sort of "spicy" quality, natural wasabi is mellower. How spicy that seems to you depends on your palate. Some people are more sensitive to wasabi than others.

Most often, wasabi pastes will be concentrated, delivering a more potent kick. If you aren't crazy about that, go with freshly grated wasabi.

How to Make Wasabi

In can be intimidating to think about getting into your own wasabi pastes and recipes, but we assure you, it's incredibly easy, especially if you're using powdered wasabi. Ever wonder if wasabi can be used in desserts? It totally can. Check out the videos below.

This video shows you how to make a creamy vegan wasabi sauce with wasabi powder, avocado and coconut milk. Use it as a dip for vegan sushi.

Wasabi makes for incredible vegan mayo, too. Watch this video to see a good recipe for a vegan portobello sandwich with homemade vegan wasabi mayo and greens marinated in nama shoyu and rice vinegar.

Now for an impressive dessert. It's a wasabi vegan cheesecake. Just as a heads up, the written part of the video is in French, but the visuals will guide you, and we'll list the ingredients right here:

"Real" wasabi, or fresh wasabi root, is a little bit different from the prepared wasabi you get in restaurants. It's fresher and more herbal in flavor with a mellowed-out spice. Powdered wasabi can be easier to work with, and we definitely suggest getting into the more creative avenues for wasabi as well as the traditional ones. Who wouldn't want to try a vegan wasabi cheesecake at least once?