Eyeing a vegan red velvet cake recipe? Read on for answers to your biggest questions. What does it taste like? How's the texture? What is it, vanilla or chocolate? You're about to find out. 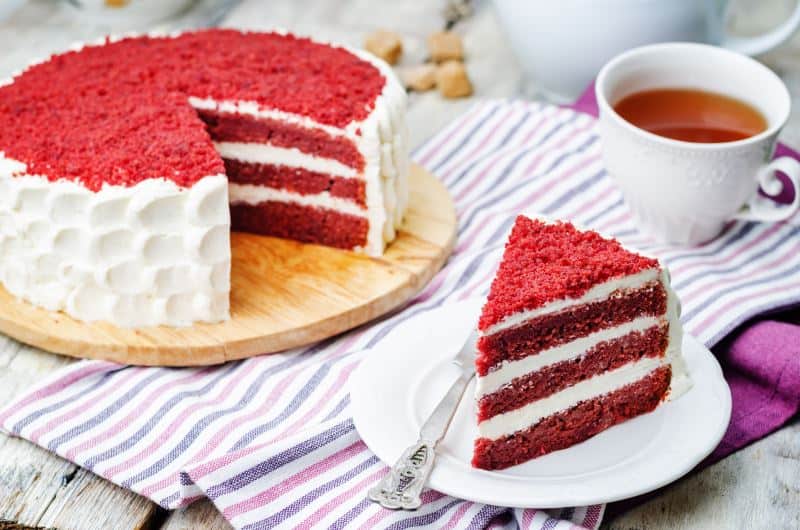 Red velvet is a term used to describe a type of cake (or cupcake) with a deep red to burgundy color. The flavor is easy to remember, yet harder to describe.

The simplest explanation is that it tastes like a mashup of chocolate and vanilla cake. But really, it's not exactly like either.

Most red velvet cakes are dense and moist, but it really depends on the individual recipe. The same is true of just about any type of cake.

The frosting is usually thick and made with cream cheese (it's sweet like the frosting on carrot cake). Since we wouldn't leave you hanging, we've got vegan versions coming up in a few.

Is Red Velvet Chocolate or Vanilla?

It's sort of both, and neither at the same time. It has both vanilla and cocoa in it, though the cocoa powder is usually modest.

It isn't chocolate by many chocolate lovers' standards, but it's not totally unrelated. Perhaps its red color is more of a defining characteristic.

Originally, red velvet cake got its hue from a type of cocoa tinted red by naturally occurring anthocyanin. Today, this cake derives its shade from either food dye or beet juice.

What’s so Special About Red Velvet?

We don't mean to shortchange red velvet cake when we say that the color is a big factor in its popularity, but it does play a role.

It's quite alluring, and if Instagram has taught us anything, it's that the way food looks is just as important as how it tastes.

But the taste of red velvet truly is in its own category. It can strike a nice balance for those who are overwhelmed by tons of chocolate, and it really feels like a special experience when you get a gorgeous red velvet cupcake from the bakery.

How Do You Store Red Velvet Cake?

If the frosting contains vegan cream cheese, you may want to store it in the fridge. A cake container with a fitted lid is ideal. If it's unfrosted, cover it in plastic wrap before putting it in the fridge.

You can probably safely leave it on the counter (covered) for a couple of days, but it will eventually dry out. But even dry red velvet cake isn't so bad when you've got a craving.

Let's get to the recipes! The first video is going to show you how to make red velvet cupcakes vegan-style while the second video will demonstrate a slightly unconventional but irresistible red velvet dessert.

Red velvet cupcakes like these are made to be shared.

Here's a vegan recipe for red velvet cheesecake brownies made with beets for a deeper, earthier flavor.

Here's are the ingredients:

Red velvet cake is a bit of a cross between vanilla and chocolate cake, but it has a flavor all its own. Some red velvet cakes get their color from food dyes while others are tinted with beet juice. Whatever your preference, once you try them, chances are, you'll be a convert. Make your own vegan red velvet cupcakes, brownies and cookies to your heart's content.