In this article, we're getting to know Marmite. You'll learn about the taste and texture, how it compares to Vegemite, and some of the best ways to cook with it. 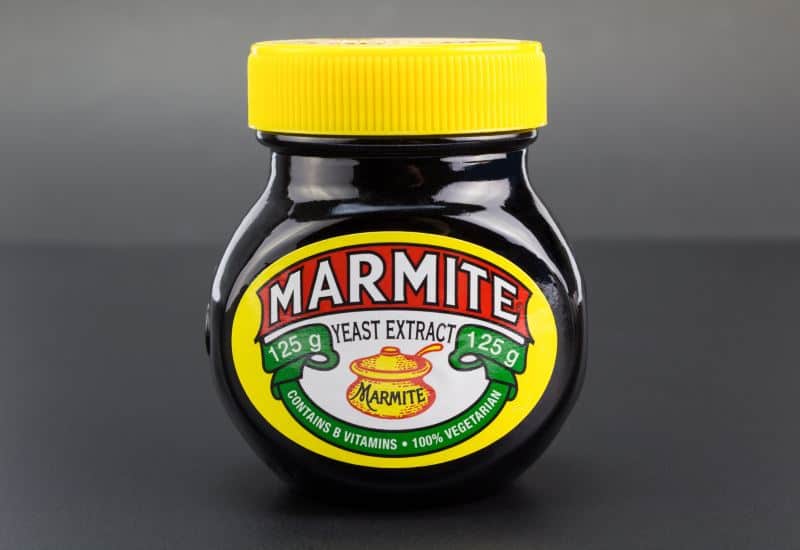 Navigate This Article Using The Links Below
What Does Marmite Taste Like?
Marmite Texture
Do Marmite and Vegemite Taste the Same?
Can You Use Marmite as a Drink?
Marmite Serving Tips
Wrap Up

It can be said that Marmite is an acquired taste for those who didn't grow up with it. This British condiment made from yeast extract is very salty with an umami flavor often described as meaty.

But there's no meat in Marmite. It's just a heavy flavor with a slightly burnt edge. Tamari is a somewhat close ingredient for comparison, but Marmite is more bitter and yeasty.

Marmite is a very gloopy substance. It looks like dark brown to blackish honey, thick and viscous but still runny enough to be poured rather than spread.

It's a smooth condiment used like jam on toast (though it doesn't look, taste or feel like jam). In terms of texture, it's a bit like if you were to use a agave on your toast. It's sticky and likely to soak in.

Do Marmite and Vegemite Taste the Same?

Vegemite is Australia's answer to British Marmite. To some, it may be virtually indistinguishable from Marmite, but there are subtle differences in the flavors.

Often, Vegemite is said to be the meatier of the two (though it has no meat in it, either) while Marmite is a mellower taste. Like Coke and Pepsi, people usually have a preference for one over the other.

Can You Use Marmite as a Drink?

Believe it or not, Marmite is sometimes used to make beverages. If your mind went straight to tomato juice, you're on the right track. You can make Bloody Mary mix with Marmite and vegan Worcestershire.

You may also be interested in making vegan broths and stocks with it. As you can probably imagine, this salty, savory spread is excellent as a soup base even if you find the taste of straight Marmite a little too intense.

So what can you do with Marmite? Well, you can eat it like the English with vegan butter on toast, but we'd also suggest taking a look at these fabulous vegan meal ideas.

This vegan version of Chinese fatt choi (or fat choy) should definitely make it on the recipe list.

Here's what you'll need to buy:

Gravy is one of the top recipes for Marmite. It adds an incredible depth that you'll never want to miss from your vegan gravy again.

If you haven't tried Marmite, you may or may not enjoy this incredibly salty, savory, "meaty" spread all by itself. If you don't, give cooking with it a go. You'll be surprised at how good it makes vegan gravy and even stir-fries. The trick is to find where Marmite fits best into the vegan cooking scheme, and when you find it, it'll become one of your favorite "spices."