If you've never had Indian food, you've come to the right place to find out what it's like. We'll tell you all about the tastes, textures and most popular dishes in Indian cuisine, then we'll give you a few recipe tips for some of the tastiest dishes on the planet. 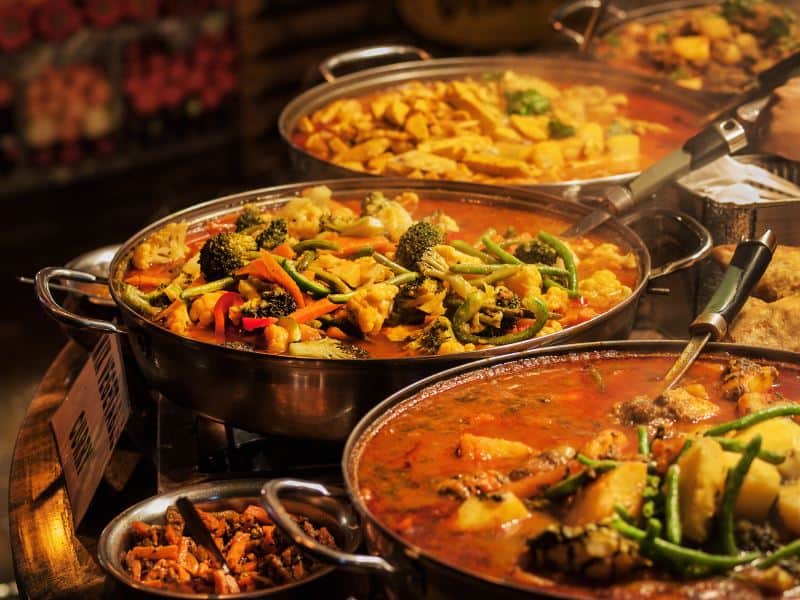 Navigate This Article Using The Links Below
What Does Indian Food Taste Like?
Indian Food Textures
Is All Indian Food Spicy?
What Is the Best Indian Food?
What Should I Eat at an Indian Restaurant?
Vegan Indian Dishes to Make
Wrap Up

Heat and strong spices are the building blocks of Indian food. It's warming, spicy and earthy with tons of potent flavor and often sweet and smoky qualities.

Spices and herbs frequently incorporated into Indian dishes are cardamom, coriander, hot pepper, turmeric, ginger and tamarind. Most of these seasonings are found in curry powder, a major component of homemade Indian foods.

Possibly the most well-known texture in Indian food is the creaminess. Curries are hugely popular, and they're rich, thick and deliciously velvety. Even non-curry items like saag paneer (greens with homemade cheese) can be creamy with pureed ingredients.

Softness is another big texture in Indian food, as in soft naan (a flatbread), rice, and tender-cooked meats and vegetables. Many Indian diets are vegetarian, however, though not necessarily vegan.

Is All Indian Food Spicy?

While some restaurants in the U.S. cater to the spice-sensitive American palate, Indian food is pretty much always spicy. The exceptions to this rule typically include certain condiments like raita, a cooling cucumber-yogurt sauce.

Some foods are milder than others. Korma, a creamy coconut curry, is usually a safe bet for a gentler meal. When in doubt eating out, ask if the spice level can be reduced.

What Is the Best Indian Food?

This is definitely a debatable subject. Everyone has their own opinion on what the best Indian meal is, but we can tell you what some of the most popular vegan ones are.

Note that it's a good idea to ask first to make sure that what you're ordering is not made with animal or dairy products, including ghee, a clarified butter.

Here are some of the most famous (often) vegan Indian dishes:

What Should I Eat at an Indian Restaurant?

As a vegan, if you stick with the meals mentioned above (making sure to double-check the ingredients), you should be O.K. But there are tons of vegan Indian restaurants in existence, too. If you go to one, you can have anything on the menu.

Otherwise, we can tell you some of the items you should steer clear of at a traditional Indian place:

Are you ready to make some mouthwatering Indian meals for dinner? Watch these videos for vegan cooking tips and recipes.

In this video, Vegan Richa makes a plant-based version of palak paneer, the famous spinach and cheese dish, using tofu instead of cheese.

Here's what you'll need to make it:

Here's a recipe for a vegan tikka masala. Usually made with chicken, this recipe replaces the chicken with luscious eggplant.

Get these ingredients to make this tikka masala:

Wash it all down with a vegan mango lassi. It's like a smoothie, but richer.

Indian dishes are flavor sensations, spicy, earthy and often sweet. It's important to watch out for paneer cheese, ghee and other non-vegan products in Indian meals that are not obvious, but you can ask for clarification if you're out at a restaurant. Do make your own Indian food at home like chana masala and vegan palak "paneer" for impressive, tasty dinners.