What is hominy? Is hominy the same thing as corn? How does it taste? If you've ever found yourself asking these questions, keep reading because we're answering them all below. 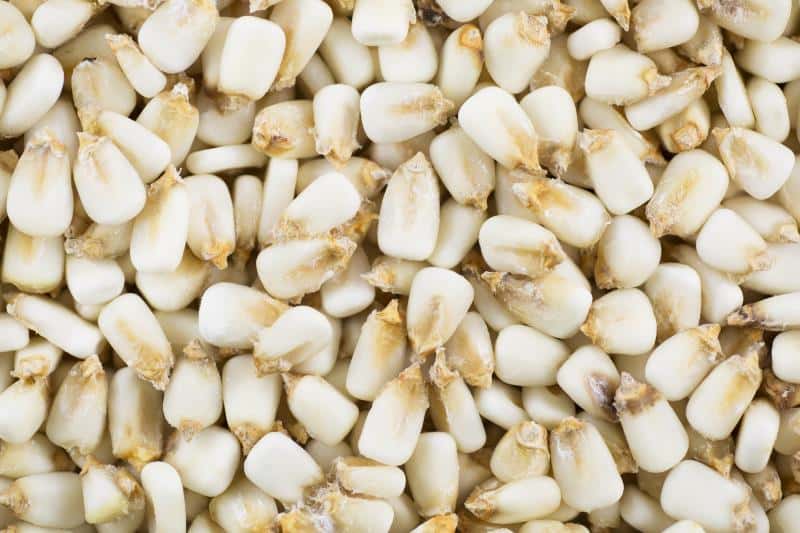 Let's get straight to it, shall we?

Navigate This Article Using The Links Below
What Does Hominy Taste Like?
Hominy Texture
What is the Difference Between Corn and Hominy?
Is Hominy Better Than Corn?
Is Hominy in a Can Cooked?
How Do You Cook with Canned Hominy?
Wrap Up

Hominy comes from dried corn kernels that have been soaked in an alkali to soften up the hulls. The taste is very mild with a pronounced grain flavor.

Though hominy is gentle in flavor, its earthiness is noticeable, making it good for savory vegan versions of grits, tamales and chili.

More so than the flavor, texture is a major characteristic of hominy. It's chewy with a slickness a little like okra.

Cooked hominy is also creamy and tender with a slightly puffy quality that some describe as "meaty." Simply but, it's very hearty.

What is the Difference Between Corn and Hominy?

The corn on or off the cob that you get at the farmers markets and the grocery stores is soft and juicy. Hominy, on the other hand, is puffed, dried and chewy due to the hull removal treatment.

Fresh corn may be roasted, boiled or even eaten raw. In contrast, hominy is not eaten raw, though it can be boiled. It may be ground into flour or added to stewed recipes to get that dense, gummy texture.

Is Hominy Better Than Corn?

Hominy and corn may share some characteristics, but as they are very different in taste and texture, which one you prefer comes down to your personal palate. Do you like sweet, juicy corn, hearty, earthy hominy, or both?

Ultimately, corn and hominy and used in different ways to prepare a diversity of meals. Bear that in mind when deciding whether to opt for one or the other.

Is Hominy in a Can Cooked?

Canned hominy is an easy way of using hominy in your cooking. It's the dried hominy corn kernels rehydrated in liquid, allowing you to skip the long cooking stage in preparing dry hominy. This method of making hominy can take up to a couple of hours.

In essence, then, you can consider canned hominy "cooked" as it does not require extra cook time to soften and become edible.

How Do You Cook with Canned Hominy?

It's so easy to cook with canned hominy. To prove it, we've linked some videos with vegan hominy recipes for you to try, both of which use many ingredients you probably already have in your pantry.

This recipe is for a vegan version of the Mexican hominy stew pozole. You'll need canned hominy, vegetable broth, tomato, chili peppers and spices like cumin and oregano.

Cachupa is a stew from the Cape Verde islands of West Africa traditionally made with corn, tomato and seafood or meat. This vegan version uses canned hominy, vegan chorizo sausage, sweet potatoes, beans, tomatoes and spices. It's packed with flavor, protein and nutrition.

Hominy is a wonderfully versatile corn product that's perfect for savory and smoky dishes. It's mild with an intriguing texture, chewy and moist when cooked. If you're looking to join the hominy train, try it in vegan soups, chili or grits.