In this article, we'll tell you all about chayote squash—what the taste and texture are like, how to eat it and what to do with it in your recipes. 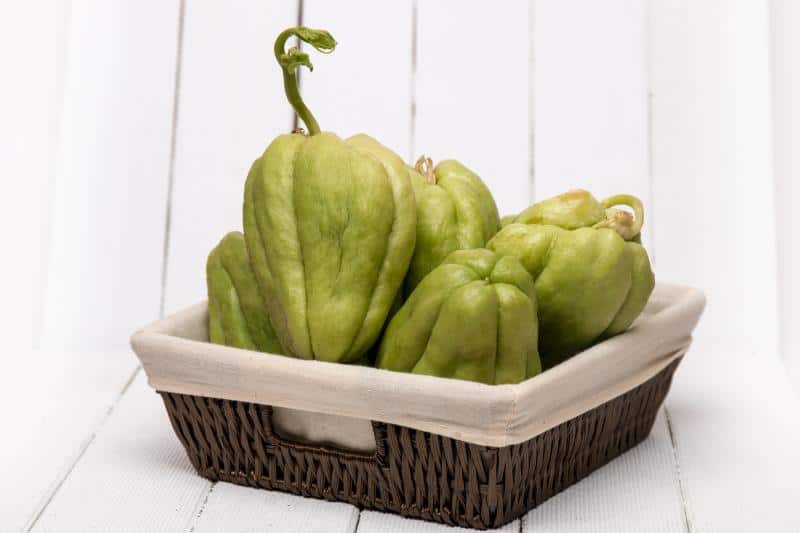 Chayote squash shares many characteristics in common with jicama. Its flavor is subtle, something like that of a mildly sweet apple, but mixed with cucumber.

The taste of chayote squash agrees with savory recipes, which is why it's so often used in salads, main meals and side dishes. However, chayote is versatile, and desserts made with this succulent vegetable definitely exist.

The wonderful snap of the crisp chayote squash is one of its main features. This is why it's so frequently compared to jicama, though it's a little heavier, like a jicama and potato hybrid.

The seeds of the vegetable are also edible, usually prepared in cooked or roasted form so that they take on a nicely crunchy texture like sunflower seeds or pepitas.

Can You Eat Chayote Squash Skin?

Technically, you can eat the skin, but because it's tough, people tend to stick with the inner part. You can simply peel the squash like a potato with a vegetable peeler.

If you do want to try the skin, cooking it will make it easier to chew. You don't have to cook the skin separately. Just don't peel the squash before you use it in a recipe.

Some people experience a mild tingling or numbness from handling raw chayote, which is caused by the vegetable sap. You can avoid this by wearing kitchen gloves while you peel the squash or just keep your hands well-rinsed.

Can We Eat Raw Chayote?

Chayote can be approached just like carrots, jicama or any salad veggie and eaten raw in cubed or grated form. If you have an older, riper chayote, the skin may be too difficult to try raw.

While you can top your salads with grated, chopped or matchstick chayote, we'd suggest trying it in salsa, vegan coleslaw and raw vegan lasagnas for the firm, crunchy and juicy texture.

How Do You Cook Chayote Squash?

You can do a lot of things with chayote. You can roast or boil the whole squash, skin and all, or you can braise it in vegetable broth, garlic and herbs. You can even cut it into wedges and bake it like fries.

Sauteing chayote will ensure that it doesn't become overcooked and soggy, which is especially possible if you boil it (but O.K. for soups). Just keep an eye on it and cook it until fragrant but not mushy.

We thought we'd share some video links with you that will demonstrate some of the many uses of chayote squash. These will get you started, but be sure to keep an eye out for other vegan recipes and cooking methods, too.

This is a recipe for a creamy vegan chayote and mushroom soup. The chef uses aquafaba, which is the frothy liquid surrounding canned garbanzo beans, but you can also use veggie broth.

Here are all the ingredients:

We're going to see how to make a light, simple sauteed chayote dish that you can serve as a side or a snack. Here's what you'll need:

As it's so mild in taste, there are a great many things you can do with chayote squash—it's a truly exciting vegetable to introduce to your cooking. Use it for crunch in salads, roast it whole or add it to creamy vegan soups. Check out chayote desserts like vegan puddings and crumbles, too.