Next to peanut butter and dry-roasted peanuts, boiled peanuts are one of the most popular ways of enjoying the ubiquitous legumes. If you've never had them, we'll tell you all about the taste and texture, plus some cooking tips if you're intrigued. 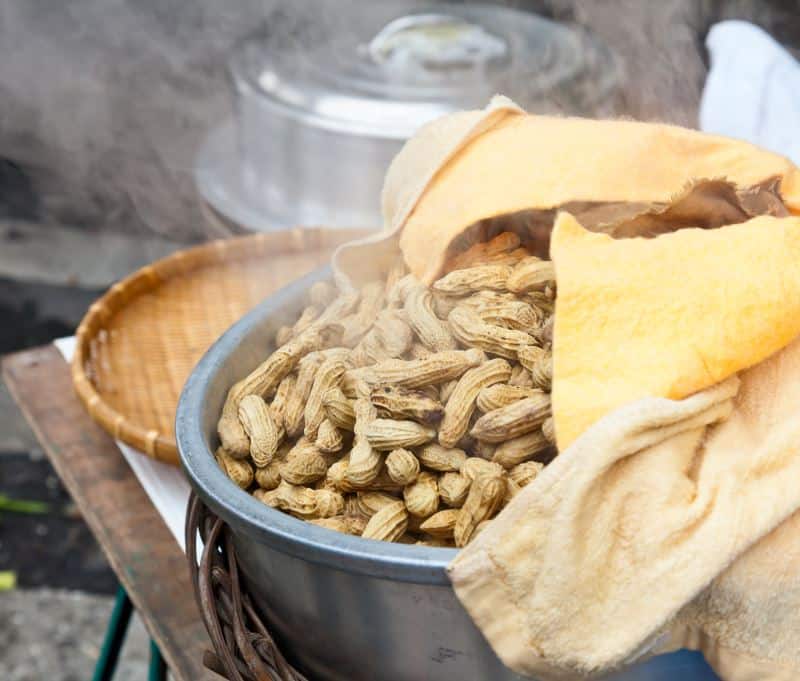 Let's get started, shall we?

Perhaps you won't be surprised to hear that boiled peanuts taste, essentially, like dried peanuts. That being said, there are certain characteristics that separate the dried from the boiled peanuts.

Because boiled peanuts are prepared in salted water, they're salty. Beyond the brininess, there's also a beany type of flavor in salted peanuts somewhat like chickpeas. Boiled peanuts have a huge fan base—people love these salty little snacks.

The longer peanuts soak in liquid, the more tender they become. Boiled peanuts are done in the shell, which becomes as soft as the peanut inside.

Boiled peanuts may be soft, but they're not total pulp. Like chickpeas, kidney beans and any other type of soaked or cooked bean, boiled peanuts have a certain firmness—they're just not crunchy.

Do You Eat Boiled Peanuts Hot or Cold?

Boiled peanuts can be eaten cold, steaming-hot and at any temperature in between. Many people prefer them right after they've been cooked, but it's not unheard of to chill them.

If you're making them at home, try boiled peanuts hot first. Then you can put them in the fridge to try them cold later.

Dry peanuts may have an extended shelf life, but boiled peanuts do not. If you cover them and put them away in the refrigerator, they should last up to a week.

You may also freeze them, which will make them last for as long as you need them to (provided they're well-sealed to keep the frost nip away).

Are You Supposed to Eat the Shell of Boiled Peanuts?

Half the fun of boiled peanuts is discovering your favorite way of eating them, but still, we wouldn't recommend eating the shells.

It's technically possible to try the shells as the boiling process softens them up so much, but eating them could be problematic for digestion.

First of all, you'll be needing to know how to make boiled peanuts. You can also buy them premade, but since it's so easy to boil them yourself, we think you're going to want to try your hand at it.

Watch this video to learn the steps involved in boiling peanuts. Just gather up some peanuts, salt and water, throw it all in a pot and you're well on your way.

There are tons of ways to eat peanuts, including boiling them first. Boiled peanuts are hugely popular, particularly in the southern portion of the U.S., salty, savory and soft. Making them at home is easy, and you can even add any spices you want to the boiling water to soak into the peanuts and make them even tastier.