Looking for some of the best vegan stuffing brands to buy? We’ve got you covered with 3 great options and tips to make your vegan Thanksgiving a hit!

After all, who doesn’t secretly like the sides more than the Turkey itself? Now let’s get to the stuffings…

The answer is –it depends. Although the term “stuffing” may have originally implied a mix of ingredients will be put inside a turkey on Thanksgiving, this age-old dish has quickly become a stand-alone staple of the holidays. While some brands of stuffing insist on adding animal fats, milk, and eggs into their packaged products, this isn’t a universal case.

In this article, you’ll find:

Having trouble shopping vegan? Check out our vegan diet shopping list​ found here only at ThriveCuisine.

This organic easy to make stuffing has a relatively simple list of ingredients which basically comes down to crumbled bread and seasoning. Even the directions on the back of the package have a vegan option which should make the exact measurements for making it super easy. 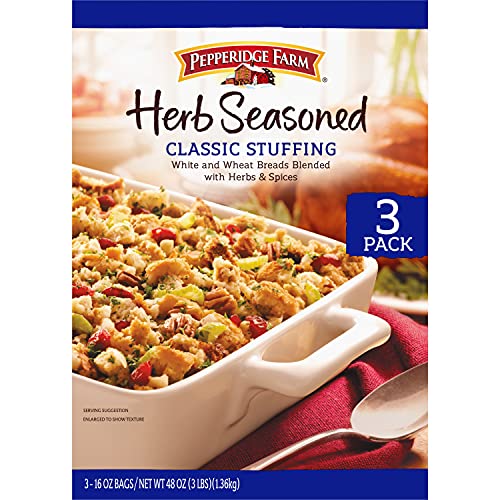 Although it contains a lot of processed ingredients, this herb stuffing mix can be prepared 100% vegan. Rather than following the exact directions on the back simply replace the butter with any sort of vegan alternative (even olive oil would work) as well using vegetable broth instead of the chicken variety that it calls for.

Quick, easy, and great if you’re in a pinch. 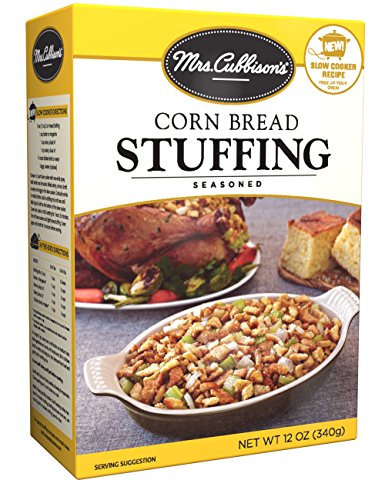 Although it wouldn’t have been our first thought to make stuffing from cornbread, it does sound like a pretty good idea. It’s pretty cool that Mrs. Cubbison’s has done this without adding any animal products to it.

Again, the directions call for butter and broth, but simply use a vegan butter alternative or oil as well as a veggie broth and it’s all good!​

Easy Way to Get Vegan Stuffing At the Store

Last year we noticed that our local  Whole Foods literally just sold bags of dried and crumbled bread, probably from their baking department. It was cheap and a great base to make any sort of stuffing with.

Its likely the case that your local grocery store will do the same around Thanksgiving. Don’t be afraid to ask the bakery department if they have any bread crumbles lying around. They will probably give them to you for super cheap!

Is Homemade Stuffing Typically Made Vegan?

Most traditional stuffing recipes, even if they are made from scratch, typically call for things like butter, animal-based broths, and even eggs – making them non-vegan. That being said, if you end up at a non-vegan Thanksgiving household, be sure to ask the host what went into it. There might be a ray of hope as our “traditional” family stuffing recipe has been accidentally vegan for generations, so you actually never know!

Be sure to let us know your favorite vegan stuffing brands and/or recipes below!

If you were curious about vegan stuffing, you may find these articles useful…