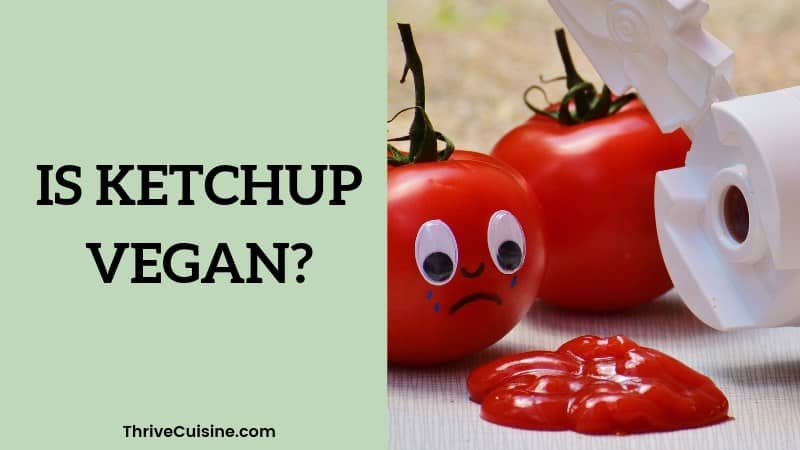 Wonder if ketchup is vegan? You've come to the right place. This guide will explain everything you want to know about the vegan status of ketchup.

No need to imagine French fries without ketchup, because ketchup is totally vegan. Generally speaking, it's made with tomatoes, sweetener and flavorings and not typically derived from animal products.

There are, however some blurred lines that you may want to be aware of. They don't mean that you shouldn't eat ketchup, but vegans should be as educated as possible about their food choices.

Here's what you should know...

Ketchup is a popular condiment in Western countries. It's typically used on sandwiches, French fries and any food that can be dipped. Some people even put it on pasta.

It's so popular that it has an official government identity from the United States Food and Drug Administration. According to the FDA, ketchup is defined as a food prepared from the following:

For the full and official technical definition, check out the FDA website, but you'll find that all ketchup ingredient statements follow that formula.

Here are some ingredients examples...

Heinz is one of the most popular global ketchup brands. Let's look at its ingredient statement:

We happen to know that Heinz ketchup is vegan (see more about this below), so in terms of the vegan status of the ingredients, this list does check out.

But what about "natural flavoring" as a broad category of an ingredient in other ketchups? What's up with that—is it always vegan?

And what about the sugar...?

Let's take a closer look at natural flavoring and a few others ingredients.

What Should Vegans Look at On the Label? 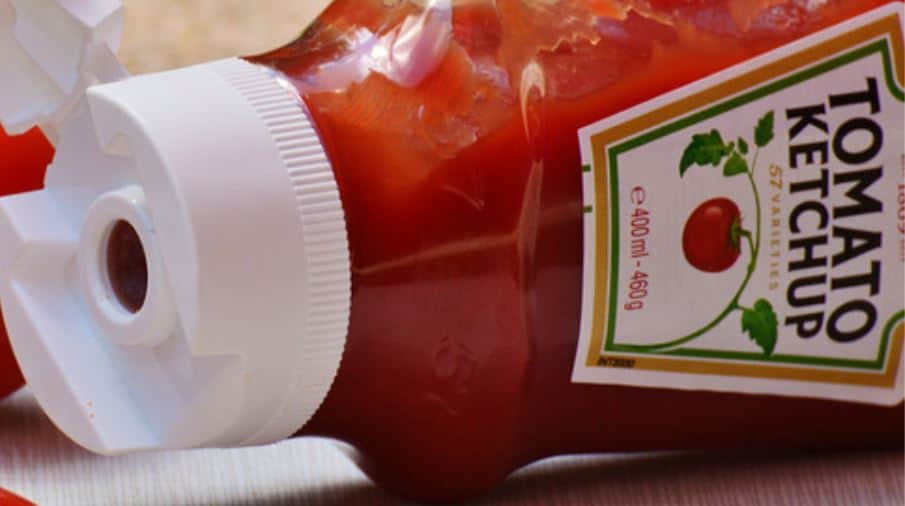 These are some of those ingredients (and what they mean for vegans):

**Again, please don't worry about these trace ingredients too much. It can teeter on the edge of being nit-picky and does very little for the animals at the end of the day. Most vegan organizations agree with this.

Is Ketchup Made with Blood or Animal Products?

A question about whether ketchup contains blood and other animal products, including pork, emerges on the Internet from time to time. This is NOT the case. Ketchup is made of a tomatoes, a sweetener, some spices and a few other ingredients - no blood or animal products.

Feel free to add it to your grocery list, particularly from these brands. 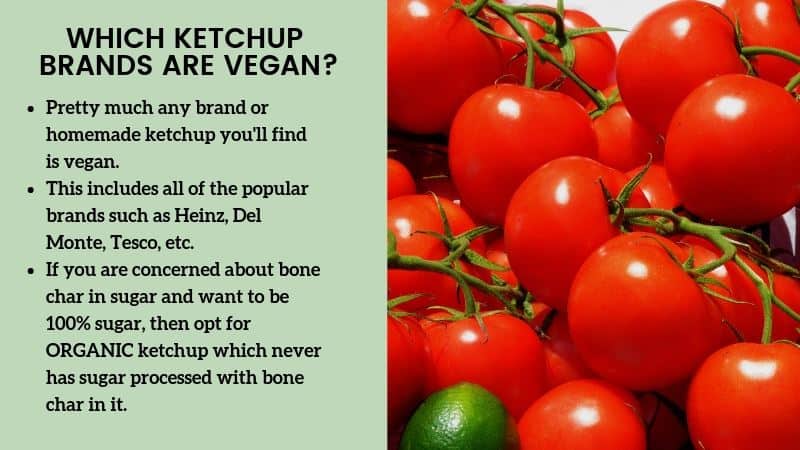 Here are a few vegan ketchup brands you can easily find in supermarkets or at dining establishments...

That's right...Pretty much any ketchup on the shelves or at restaurants is considered vegan.

Again, don't worry about the insignificant things like sugar if you're in it for the animals. It just makes veganism complicated and not accessible.

But if you do want to avoid bone char sugar then always go for the organic ketchup. It's the safest bet.

I would consider McDonalds ketchup to be totally vegan. Here are the ingredients:

This is a bit of a conundrum. McDonald's says this about its products in general:

"We do not promote any of our US menu items as vegetarian, vegan or gluten-free."

McDonald's appears to use HFCS plus natural flavoring in its ketchup. If you do a quick search, you'll find that many vegan websites list McDonald's ketchup as vegan-safe, and it may be.

Without information about the natural flavoring, we can't be totally certain.

But as we keep saying, don't worry about these little details. As long as you're not buying the meat, dairy, fish and egg products from McDonalds then you're already doing 99.9% of what you could which is more than enough.

I would consider Hunt's ketchup to be totally vegan. Here are the ingredients on the label:

Again, I don't worry about small details like "natural flavors" and most other vegans don't as well.

Yes, this product is totally vegan. We go into a bit more detail in this post:

Our Responses from Ketchup Companies

We decided to reach out to the big brands (just for fun) and see what they said about the vegan status of their ketchup. Here it goes...

Muir Glen has officially responded to our inquiries. This brand says that its ketchup contains no animal products, so we've added it to our recommendation list.

Heinz also replied with a clarifying statement about its ketchup.

There are no animal byproducts in the flavoring of HEINZ Tomato Ketchup.

Did you know that you can make delicious vegan ketchup at home using tomatoes, vinegar and some spices?

It's true! Watch this video below to see just how easy it is. And trust us, it tastes WAY better than the store-bought stuff...

Most mustard is totally vegan. We go into full detail in the following post about vegan mustard:

As stated earlier, sugar is kind of a controversial ingredient. Some kinds of sugar are processed with bone char so some vegans choose to avoid them. For me, worrying about things like sugar in ketchup is a bit too nitpicky. I don't think it does any good for anyone.

You can see the full post on vegan sugar here to learn more.

Sriracha gets my stamp of approval as totally vegan. I've broken down the ingredients in the following post:

So is ketchup vegan? Yes!

If you’ve yet to make the transition to veganism and feel that "natural flavors" in ketchup are going to be a barrier, we would personally recommend not worrying about it. Just be sure you’re able to remove all major forms of animal products from your diet.

This is the most practical approach to reducing animal suffering and your carbon footprint, rather than nit-picking over very negligible ingredients. Once you’ve gotten to that point, then feel free to take the next step and investigate the entire food supply chain.

2 thoughts on “Is Ketchup Vegan?”