Are you looking for nuts with names that start with “C”? You have found the right article! You will find all of them listed here, along with a brief description. Read further to learn more.

Although considered a nut in its culinary usage, botanically, cashews are in fact drupe seeds. This Central American native is grown primarily for its pseudofruit called the cashew apple, and more importantly, its seeds. Most of the world’s cashew production comes from Vietnam, India, and the Ivory Coast.

Chestnut is often used as a collective term for a group of eight to nine species in the genus Castanea. Unlike most culinary nuts, chestnuts have very little protein and fat. It is usually peeled and eaten raw, or in some cases, it is roasted without peeling.

Just like cashews, coconuts are botanically drupe seeds, not nuts. The tree itself is considered the most useful tree in the world, owing to all its parts being useful, hence dubbed “the tree of life.”The fruit on the other hand has multiple culinary uses. Apart from being eaten directly, it is also used in making non-dairy milk, coconut water, flour, and oil. 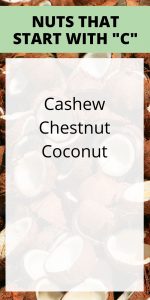