Are you looking for nuts that start with “B”? You have found the right article. You will find all of them listed here, along with a brief description. Read further to learn more!

Beechnut is the triangular-shaped fruit of the beech tree. It drops off to the ground during the autumn. The rough-textured, small fruits are edible despite being bitter and astringent in taste. It is described to have a mild nutty flavor.

Brazil nut is the edible seeds of the tree with the same name. The fruit and its nutshell containing the edible nuts are considerably big weighing about 2 kilograms in total. It has high micronutrient content and considered the most abundant dietary source of selenium.

The seeds from the red fruit of this climbing vine are the only edible part of the plant. They can be used in both their fresh dried forms. Meanwhile, the plant itself is in general considered toxic and fatal if consumed or if the juice is applied to the skin.

Otherwise known as breadnuts, the large seed containing the edible nut is covered by an orange peel. The nuts may be boiled or dried. Typically, it is mixed into bread and porridge. It is sometimes mixed in stews, rendering it a potato-like taste. It is also sometimes giving it a chocolate and coffee-like taste.

Bouche rouge is a variety of European chestnuts native to Southeastern France. This cultivar is the product of the hybrid between Sardonne and a local variety. It bears a medium to large, red-colored, chestnuts described to have a very physically appealing and pleasant flavor.

Bouche de betizac is a French chestnut cultivar, a hybrid between Castanea crenata and Castanea sativa. This variety bears large to extra large sizes of chestnuts with a pleasing flavor. Marigoule is one of the more popular varieties, being extremely productive and able to produce large quantities.

Blitum californicum is a species of flowering plant, native to California. The fruit produced is reddish in color covering edible seeds or nuts. The seeds are dried and ground to a flour form which is used in various dishes. 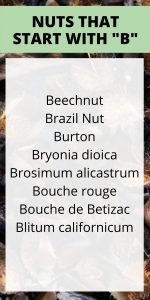