Are you looking for all the nuts with names that start with “A”? Then this is the right article for you. You will find all of them listed here, along with a brief description. Read further to learn more.

Acorn is the nut of the oak and other members of the same genus belonging to family Fagaceae. In the majority of cases, this nut has one seed inside which is hard and leathery, although sometimes two seeds in a nut are also possible. It served as food for Native Americans, Koreans, and Ancient Greek, due to its capability to be stored for a long time, and as such, has historically been a famine food.

Also known as candlenut, Aleurites moluccanus is a flowering tree in the family. The nut and the oil extracted are both edible but have mild toxins when consumed in their raw form. In some cultures, the nuts are cooked or toasted. In some parts of Indonesia, these nuts are used in making a thick sauce for different dishes, while in Hawaii, they are made into a condiment.

Although native to Iran,  this tree is widely cultivated in different parts of the world for its nuts. The almonds can be eaten raw or toasted and can be grounded into flour which is also used in various dishes. It can also be processed into almond milk and almond butter which are used in sweet and savory dishes as a vegan alternative to dairy milk and actual butter.

This large deciduous tree in the beech family is native to the eastern part of North America. It is considered economically important in North America, where it can be easily found. The edible nuts are consumed either raw or toasted. In traditional medicine, it is believed to cure minor illnesses such as cough and chafed skin.

Commonly called wild cashew, this flowering tree belonging to the family Anacardiaceae can be found in the tropical forests of Central and South America. It produces long kidney-shaped fruits. The uncooked nuts are toxic to human; however, it is edible after being roasted. Botanically, though, it not a true nut.

This conifer, despite being commonly called Brazilian pine, doesn’t belong to the genus Pinus. This 40 meter-tall evergreen tree produces 5-centimeter long nut seeds. The seeds, just like pine nuts, are edible. They are eaten boiled as winter snacks.

Araucaria araucana is an evergreen tree native to some parts of Argentina and Chile, where it is a national tree. The tree produces seeds or nuts which are primarily consumed by animals like mice and rodents. Like the large pine nuts, they are also edible and are eaten by natives of Argentina and Chile. It is commonly called monkey puzzle.

This evergreen coniferous tree is commonly known as bunya pine or sometimes referred to as false monkey puzzle. It grows to a height of 30 to 45 meters and bears a large cone containing edible seeds and nuts. The nuts are naturally sweet before reaching their ripening stage and have a roasted chestnut flavor.

The tree can grow up to 10 meters in height and may live up to 200 years. It produces a fruit with thick and bitter peel and a pulp wall that covers the nut that contains seeds rich in oil. The roasted seeds are ground to extract oil from which is used for various culinary purposes.

Atriplex powellii or Powell’s salt weed is a plant native to the United States and Canada. The seeds produced from this plant were part of the Native American diet before corns and other grains were introduced. 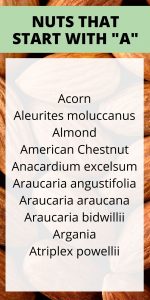