There's a lot of confusion out there, but this guide is here to make your decision easy. We'll be covering a lot in this post to help you make your choice. 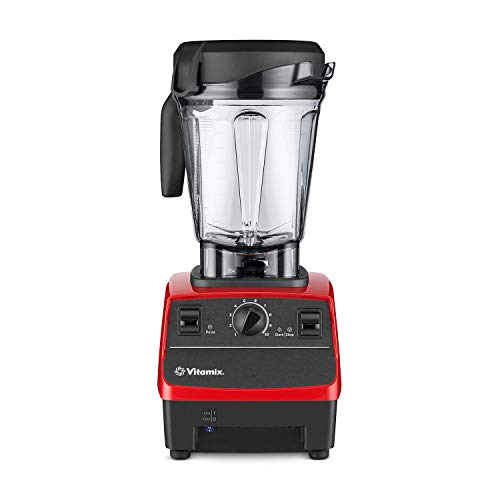 The Vitamix 5200 is essentially a previous version of the 5300. It has many of the features of the 5200, but does not come with a low profile tamper or the same pulse function. Its motor is slightly less powerful, but it's still a solid option with its variable speed controls, and is perfect for anyone wanting to blend large batches.

The Vitamix 5300 is a classic example of the quality Vitamix stands for. It comes with a low profile Vitamix container that's perfect for fitting under low-hanging cabinets and the standard 7 year warranty that assures you of its quality. Additionally, you get a low profile tamper with this blender, making it a fantastic pick for anyone concerned about their counter space.

While we think both these Vitamix blenders are excellent, our personal recommendation in this Vitamix 5200 vs 5300 comparison is the 5300. With the 5300, you get most of the features of the 5200, but with some minor improvements, like a slightly stronger motor and low profile container.

If you want more information about the Vitamix 5300, you can read my Vitamix 5300 review.

With both these Vitamix blenders, you'll get a tamper. If you've ever blended something that's supposed to be smooth, such as a juice or smoothie, then there's a possibility you've been disappointing by remaining chunks.

Well, both the Vitamix 5300 and Vitamix 5200 come with the equipment designed to make that a thing of the past. Their tampers allow you to push floating food down into the stainless steel blades during use, which helps guarantee nothing is left behind.

In other words, you can say good-bye to chunky smoothies and hello to velvety smoothies, purees, shakes, and juices that you'll crave.

If you were to set these Vitamix blenders side-by-side, you'd notice that their control panels look remarkably similar, although there are a few differences. One thing you'd see is that they both have a variable speed control knob.

The variable speed knob makes it incredibly easy to control either blender. You can turn the knob to adjust the speed and intensity of the blend, giving you total control over the resulting concoction. With this kind of flexibility, you'll be able to blend pretty much anything you need to.

For the most part, the accessories you get with either blender are the same. With either one, you'll get a tamper, starting guide, motor base, and container.

There's really only one difference in terms of accessories: the Vitamix 5300, in addition to all the aforementioned items, also includes a DVD. You can use it as an introduction to the blender.

At any rate, these two blenders both come with just about everything you need to get started. Either way, you'll be ready to start blending as soon as you've got them set up.

When it comes to the Vitamix 5200 vs 5300, the warranty isn't going to be something that helps you decide. They both have the same 7 year warranty, which gives you tons of time to report any issues with the blenders.

On either blender, the warranty is also full. Vitamix has so much faith in the quality of their blenders, that they have no problems giving you this much time to get help with replacements and fixes. That peace of mind is one thing that makes Vitamix so legendary.

Have you ever had an appliance with a really short cord? Then you've experienced the frustration of trying to figure out where to position it for the most convenience. When you're tethered to a short cord, you often end up needing to use the appliance in an area that's uncomfortable.

This isn't going to be an issue with the 5200 or 5300. On either blender, you'll find an immense 6-foot cord, which gives you plenty of room to move. You won't feel as if you're tethered to a wall with either Vitamix blender in this comparison.

The 5300 comes out slightly ahead of the 5200 in horsepower, which gives it a bit of an edge, even though power isn't everything when it comes to a blender.

You'll still be able to do the exact same blending jobs, but a slightly more powerful motor on a blender that's well designed like a Vitamix will make the process just a little more seamless.

In other words, don't worry that having a slightly weaker motor won't be able to handle the Vitamix essentials like...

Both the 5200 and the 5300 can do it and do it well. It's just a matter of a little extra tamping here and there and feeling slightly more/less resistance on the machine. Either one of these blenders still has a powerful motor.

The sizing of the jars is probably the biggest and most important difference between these two blenders. The wider and low profile jar on the 5300 offers the advantage of the ability to sit under a low cabinet. However, it always takes a little bit more volume of ingredients to get a vortex going on a wider-mouth jar.

The reason for this is simply because the taller jars are skinnier at the bottom. This means that a vortex can form easily with less liquid. On the other hand, you'l have an easier time getting a vortex for super large servings in a wider-base jar.

Simply put - wider jars are better for making large batches while more narrow jars are better at small ones. At the end of the day, they can both do the same thing, especially with use of the tamper. It's also worth mentioning that, despite their differences in shape, the 5200 and 5300 both have 64 ounce containers.

Do note: You can get a smaller 32 oz jar later down the line if you're finding small batches to be problematic with the 5300.

Either Vitamix blender will give you control over the speed of the blending. However, there are differences in just how that control functions.

In particular, the Vitamix 5200 has a variable selection on its control panel. On the top of the speed switch, it says high, and on the bottom it says low.

The "high" setting on the Vitamix 5200 will basically turn the blender into "turbo" mode, which is a function of the original Vitamix design. Once you flip this switch, variable speed mode is disabled.

On the other hand, the Vitamix 5300 has all the speeds you need with the knob. I wouldn't say that the turbo or "high" feature gives it any sort of advantage.

Again - all the Vitamix models can do the same thing in terms of the meals they can blend up. We'll discuss the pulse function in the next section.

The pulse feature is nice to have, but not totally necessary. It's simple enough to pulse the blender by toggling it on and off. In fact, that's what I do with my older Vitamix unit and it works pretty well.

However, it's probably not that great for the machine having to actually power it on and off.

If you're wondering what you would need pulsing for, it's good if you want to get a rough chop on ingredients without totally pulverizing them.

You'll end up using it more than you think.

Given the reputation that Vitamix has, many buyers have plenty of questions about any of their blenders. In this section, we'll take a quick look at some common questions related to the Vitamix 5200 and Vitamix 5300.

The problem most people have with any Vitamix blender is the cost. The Vitamix 5300 is no exception to that rule, as it can get quite expensive. This leaves quite a few people wondering: is the Vitamix 5300 good enough to justify its price?

In short, the answer is yes. There are a few reasons why the Vitamix 5300 blender is a fantastic option worthy of its cost.

For one thing, consider its motor. A nice 2.2 horsepower motor will have more than enough strength to pulverize just about any ingredient you could need it to. In fact, of these two blenders, the Vitamix 5300 blender actually has the better motor power, although only a little.

Next, its lovely 64 ounce container is a welcome addition. It gives you more than enough to room to blend large batches of food, giving you the functionality you need to to share with everyone at your table.

Many customers also love its tamper. With versatility in recipes comes the risk of some ingredients being missed in blending, and the tamper works as insurance against that possibility. A healthy lifestyle is easily achievable with this blender, no matter what you're blending, even if you use it for juicing.

If you're wondering whether or not the Vitamix 5200 is worth it, we'll dive into that topic quickly, too. In brief, yes, we think it's worth the price.

Like with the Vitamix 5300, it also has a generously sized 64 ounce container. A 64 ounce container has all the space you could ask for when it comes to blending; you'll always have the room to make as much as you need. Remember, the only real difference between these two blenders in this regard is that the 5300 has a specifically designed low profile container, while the jar on the Vitamix 5200 does not.

Vitamix has a lot of blenders to choose from. Because of all the options, some people find themselves wondering about the differences between models, and whether a specific one would be better for them than another.

The Vitamix 5200, as you might recall, does not have a low profile container. However, the 7500 does. Regardless of the overall shape, though, these two blenders both have 64 oz pitchers.

Is there a blender better than a Vitamix blender?

Given their typically higher cost, it's also common to wonder if there are blenders out there superior to Vitamix ones. The 5300, 5200, and 7500 are all just a few examples from this famous company, after all.

Frankly, Vitamix is one of the best blender manufacturers out there. We wouldn't say that there's a definitively better blender on the market today.

But we also understand that models like the 5200 and 5300 are too costly for a large portion of consumers. Although there isn't a blender guaranteed to outperform the likes of the 5200 and 5300, there are comparable Vitamix alternatives.

If you'd like to see some of them, you can read our full list of the best Vitamix alternative options.

Which One Should You Get?

In the battle of Vitamix 5200 vs 5300, which is the best Vitamix blender? Remember, both these blenders have a lot of similarities. They come with many of the features that make any Vitamix blender famous.

However, if we could only pick one of the two blenders, our recommendation is the Vitamix 5300. You'll get that slightly more powerful motor, the pulse setting, and the knob with all the blending speeds on it. At the end of the day, though, the Vitamix 5200 and 5300 are both excellent blenders.

Navigate This Article Using The Links Below
Vitamix 5200 vs 5300 Summary
Similarities
Differences
Vitamix 5200 and 5300 FAQs
Which One Should You Get?
Summary
Review Date
2020-09-08
Author Rating
5