Pavilions are going mainstream! Every day, we’re seeing more of them moving in next door, so to speak. What is the difference between a gazebo and a pavilion?

There are actually more differences than you might expect. When we think about the two terms, a few obvious answers come to mind. When you dive into the question a bit more, we discovered that there are additional factors to consider.

Short Answer: What is the Difference Between a Gazebo and a Pavilion?

A gazebo and a pavilion share the same basic structure: an open-air building with vertical columns supporting a solid roof.

But there are 4 factors that distinguish a gazebo from a pavilion.

There are exceptions to every rule (and we’ll touch on them below) but, for the most part, you can discern a gazebo from a pavilion with this criteria.

Where Does the Term Pavilion Come From? 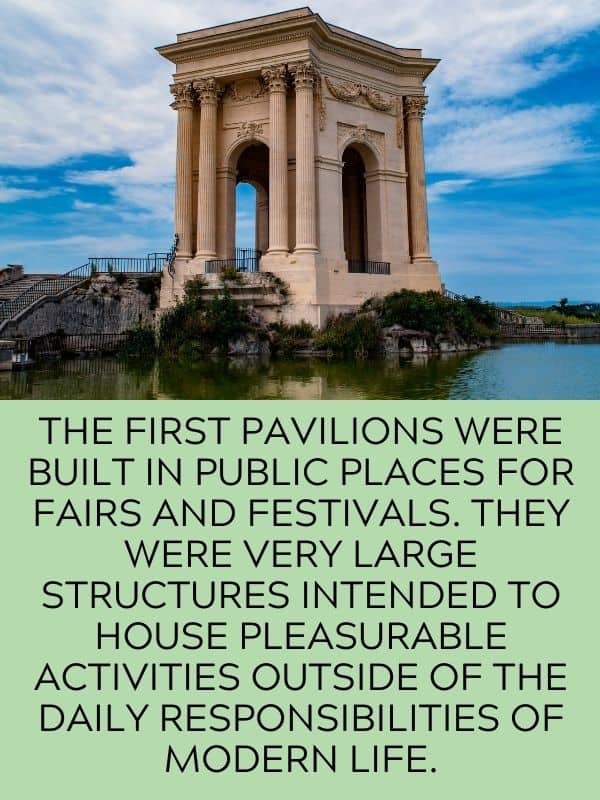 Some people will say that pavilion is actually another name for a gazebo. While that is not technically true, the structures do share many similarities, including some that are historical and linguistic.

The word “pavilion” is an Old French word that comes from a Latin root. In both languages, the term means “butterfly” or “tent” because of the shape of the structure’s pitched roof. Although a gazebo and a pavilion do not share the same roof, they do share the same architectural intent

Pavilions were especially popular in the 1800s in Europe. Gazebos and pavilions were both designed for purposes of leisure and pleasure. Pavilions were not business buildings. They were intended to be an escape from the hustle.

The first pavilions were built in public places for fairs and festivals. They were very large structures intended to house pleasurable activities outside of the daily responsibilities of modern life.

Key Differences between a Gazebo and a Pavilion

There are still public pavilions in the 21st century, many of which are associated with sporting events. In the last decade, pavilions have also moved to the suburbs; which is to say that you can find residential pavilions in the same neighborhood as gazebos.

The next time that you’re strolling through your community and pondering the difference between a gazebo in that backyard and that other pavilion across the street, keep these 4 factors in mind.

While 19th-century pavilions were large structures associated with public events (there were some private pavilions but they were owned by royalty), residential pavilions today aren’t quite as big. However, size is still a primary difference between a pavilion and a gazebo.

If you have a pavilion on your property to extend your living space to the outdoors, it’s most likely large enough to house a few sets of furniture. A common set-up in a pavilion includes an outdoor kitchen on one end and a dining set for 6-8 at the other. Even with the furniture, 10-12 people can comfortably mill about a typical residential pavilion.

On the other end, the standard size of a gazebo is 12’ x 12’, which is enough space for 4-6  people plus a living room or dining room set.

Gazebos are for enjoying family and friends. Pavilions are for entertaining an extended guest list.

The existence of built-in flooring as a difference between a gazebo and a pavilion isn’t as straightforward as the distinction between size. There is a little bit of nuance depending on if we’re talking about public or residential structures.

Modern pavilions in public places do not have built-in floors. Instead, these pavilions are built with only vertical supporting columns directly onto whatever ground is already there.

On the other hand, gazebos in public places today have built-in floors, which means that they’re raised off the ground with a floor made from the same material as the frame.

Residential pavilions do not usually have a floor. They are simply smaller versions of the structures found in public spaces.

However, residential gazebos also do not typically have a floor. That’s because most of the gazebos available for purchase today are sold as gazebo kits that require some level of at-home assembly.

Unless otherwise stated, these kits don’t include a floor and instead are similar to home pavilions: 4 vertical columns supporting a solid roof. Many of the kits do not require a foundation for set-up but regardless of how they’re anchored to the ground, the ground isn’t provided.

Some of our favorite models of gazebos have sliding screens and windows. If you live in an environment with a lot of bugs or if you’re keen on installing electricity in your gazebo, being able to enclose your open-air structure is a huge benefit to increase its year-round usability.

Neither residential nor public pavilions have screened options. They are always open-air. The reason for this most likely has to do with size. Once you start down the road of enclosing a 20-30’ outdoor space, you begin to enter the realm of out-building which also means additional considerations including access to utilities.

Of course these types of structures do exist, they’re just not called pavilions once they become enclosed out-buildings on a property.

A pavilion’s roof is the most apparent distinction between it and a gazebo. Residential and public pavilions have pitched roofs. In other words, their roofs make them look like a house without walls.

There is no one particular roof shape shared by gazebos. Depending on the shape of the gazebo (rectangular, square, or round), the roof will be flat, slanted, or tiered with single or double vents.

A vented gazebo roof is best for keeping a gazebo cool and allowing grill smoke to escape quickly.

There are clear reasons for why you’d prefer to add either a pavilion or a gazebo to your property. The amount of space you have available is one important deciding factor since home pavilions tend to be significantly larger than residential gazebos.

Your preference for flooring is less of a factor if you’re purchasing your gazebo or pavilion as a kit. However, if you would like a built-in raised floor, a gazebo is your best option when purchasing or building.

If you have a strong desire to occasionally enclose the open-air outdoor structure, some gazebos have sliding screens and windows. A pavilion will not.

Lastly, if your architectural sensibilities prefer a more traditional-looking roof (like the roof of a house), pavilions offer a distinct style that you won’t find in the gazebo world.

Good luck with your decision!